The early morning fire on September 18th at 1930 De La Vina Street has been classified as suspicious in nature and continues to be investigated by the Santa Barbara City Fire Prevention Bureau. Preliminary damage estimates are $300,000 for the building and $200,000 for contents. More information will be made available at the conclusion of the investigation.

Shortly after 2am this morning, 911 dispatchers were alerted to smoke coming from a business in the 1900 block of De La Vina St. The Santa Barbara City Fire Department responded 3 engine companies, 1 ladder truck and a battalion chief to the scene. 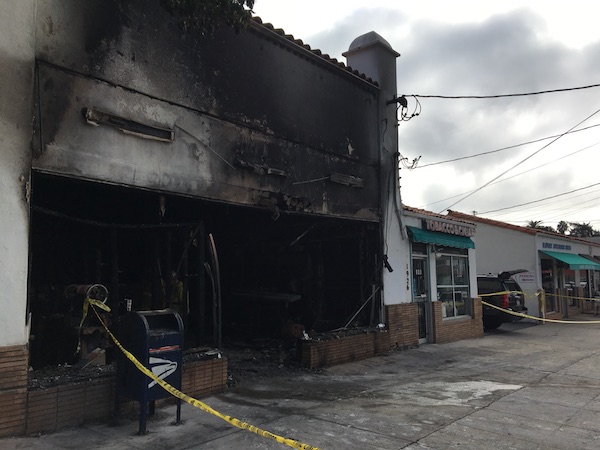 First arriving crews reported smoke visible from the front of the business and active fire coming from the rear of the structure. 2 additional engine companies were dispatched to the fire scene. Initial efforts were focused on fire attack to the rear and protecting adjacent businesses. Truck personnel laddered the building to cut a ventilation hole when the front of the building self-ventilated and blew out the windows on De La Vina St.

Fire attack crews entered the building through the rear door, encountering active fire and heavy black smoke banked down almost to the floor. 2 hose lines were used to extinguish fire on both the first and second floor. A thorough search was immediately conducted to check for occupants, none were found.

Police and public works personnel assisted with traffic control in the Mission and De La Vina area with Edison crews called in to de-energized service lines to the fire building. The laundromat suffered extensive damage throughout, with smoke damage to an adjacent tobacco shop. There were no injuries reported to fire crews. The cause of this fire is currently under investigation.

I snapped a photo right after the fire department arrived at the Bubbles N Beans laundromat at Mission & De La Vina. The crackling and popping woke my roommate and I up at about 2:15 am when the flames had already engulfed the back portion.

Bravo to the artists and to

The sheer amount of white

You're right, Pitmix. I