Mike Hoover, a Santa Barbara geologist, wants to remind us of the Medieval Drought, the epic dry period that held California and the West in its grip for 400 years, beginning in 950 AD.

“That thing was really bad,” says Hoover, who mentions the mega-disaster in his new book, Drought & Flood: The History of Water in Santa Barbara and Montecito. -- So bad, he says, that it may have led to malnutrition and warfare among the prehistoric Chumash.

“I keep telling people, ‘You ain’t seen nothin’ yet,’” Hoover said. “We’ve been in an abnormally wet cycle in the last three or four hundred years, and that’s changing now. Climate change will amplify the ongoing trend to dryness.” 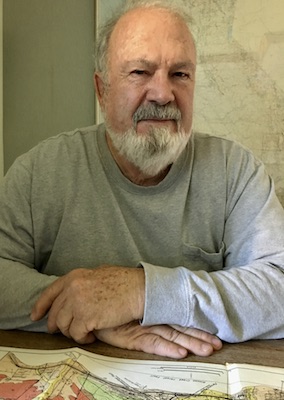 Mike Hoover, a Santa Barbara geologist, supervised the drilling of 300 wells in his career, mostly for private landowners from Montecito to Goleta. (Photo by Melinda Burns)

During his career, Hoover oversaw the drilling of 300 wells, largely for private landowners from Goleta to Montecito, claiming a success rate of 90 percent. His book, though, catalogues the much more difficult, not as successful and usually tardy efforts of South Coast residents, beginning in the 1780s, to develop public water supplies in the face of drought and population growth.

“We never do what we need to do until the crisis is upon us,” Hoover said in a recent interview. “We’re always late to the party.”

The Santa Ynez River, the main source of water for Santa Barbara and Montecito, flows only a few weeks or months every year. As Hoover shows and every local knows, the weather can veer from a “pattern of paucity” and dried-up reservoirs, to “atmospheric rivers” and biblical floods.

Drought & Flood tells how, in the wake of a prolonged drought, the Franciscan missionaries used Chumash labor to build a dam upstream from the Mission in 1806, in what is now the Santa Barbara Botanic Garden. In the same way, severe droughts prompted the construction of the Juncal Dam in the headwaters of the Santa Ynez (a good location); Sheffield Dam near Highway 192 (a bad location: it collapsed in the 1925 earthquake); and Gibraltar Dam, downstream of Juncal and Mono Creek (a bad location: the reservoir is filling with mud.) 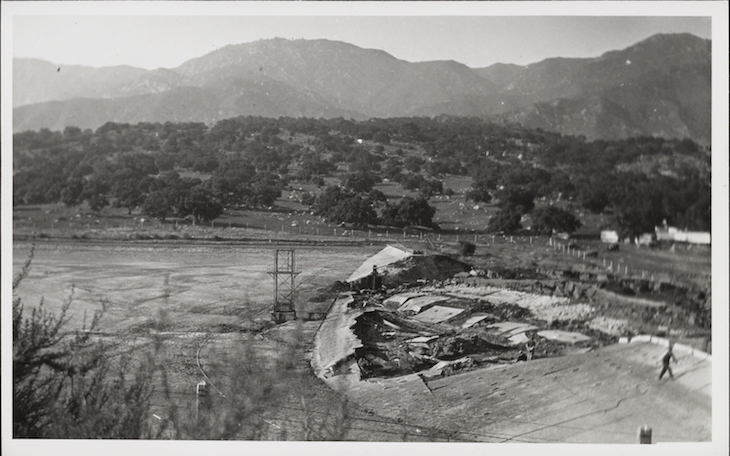 In the drought of 1944 to 1951, the driest in local recorded history, county voters approved the construction of the Bradbury Dam downstream of Gibraltar, creating Lake Cachuma.

“Every time they built a dam, they were sure it was the last one they’d ever have to build,” Hoover said.

Shell-shocked by drought a few decades later, the voters looked to northern California for a new water supply, approving bonds in 1991 for a 144-mile-long pipeline from the state aqueduct in Kern County to Lake Cachuma. The cost, originally estimated at $270 million, ballooned to $575 million by the time the project was finished.

Simultaneously, Santa Barbara voters approved the construction of a $30 million desalination plant on the city’s waterfront. The plant was mothballed (remember the “March Miracle” rains of 1991?), then rebuilt for $72 million in 2017, during the recent seven-year drought. This summer, with the memory of rationing still fresh, Montecitans signed up for a 50-year supply of city water and agreed to pay nearly half the cost of the desalination plant.

“We should have said ‘no’ to state water,” Hoover says. 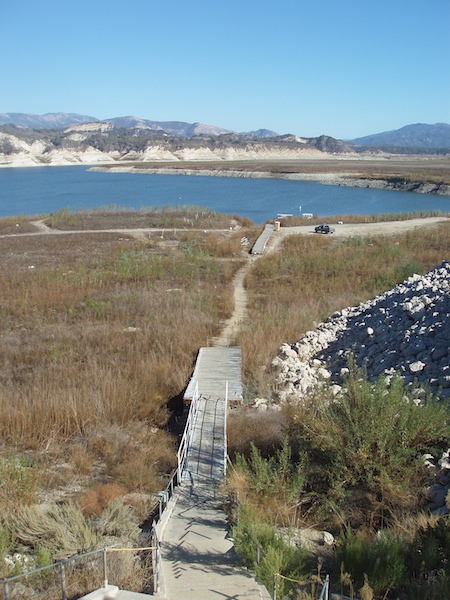 In October, 2015, four years into a seven-year drought, it was a long walk across dry lakebed to the boat landing at Lake Cachuma. Note the big “bathtub ring.” A worse drought from 1944 to 51 prompted the construction of Bradbury Dam and the creation of this reservoir for the South Coast. (Photo by Melinda Burns)

Opponents of the city’s deal with Montecito said the desalination plant was energy-intensive, harmful to marine life and was intended to run only in emergencies, not year-round. Montecito, they said, could have imported extra supplies of water through the aqueduct from around the state to weather future droughts, just as it did in recent years.

But Hoover views the aqueduct branch to Cachuma as “probably one of the biggest mistakes we made here.”

“I’m not in favor of moving water from one watershed to another,” he said. “We’ve got a crisis in our fishery in the Sacramento River, and we’re shipping water hundreds of miles to places that are perfectly able to build a desalination plant.”

State water, Hoover notes, is far more expensive than desalinated water, considering that historically, the South Coast has used only 30 percent of its state water allocation, yet ratepayers still must pay the fixed costs of the aqueduct branch. No matter if it’s a wet year and there’s no need for state water; or there’s a drought, and the state cuts allocations: the aqueduct bills are due – more than an annual $5 million each for Santa Barbara and Montecito.

Hoover ends his book with a prediction that desalination, wastewater reuse and the use of ground water as a drought buffer will be the region’s most reliable future water sources. Bucking conventional wisdom, he argues that water conservation “has run its course.”

“One can only put so many bricks in the toilet,” he writes.

Heavy flooding in January 1967 swamped the parking lot and runway at the Santa Barbara Airport. (Photo by Jim Stubchaer)

For this reporter, who has covered water in Santa Barbara County for 35 years, Drought & Flood deftly pulls together local water history, science and data from multiple sources into one handy reference book.

But the book is a primer for lay readers, too. It’s just 100 pages long, with many full-page maps, charts and historical photos, including the Santa Barbara Airport with its runways underwater in 1967; and a shot of the workers who battled methane gas and cave-ins to build the Tecolote Tunnel connecting Cachuma to the South Coast in 1956.

Hoover touches on such disasters as the cattle die-off and collapse of South Coast ranching during the Great Drought of 1862 to 1864. He includes some of the quirks of local geology, including the sulfur-rich hot springs above Montecito and the natural cistern that waters the greens at the Birnam Wood Golf Club on East Valley Road.

Hoover also untangles the maze of private water companies that have come and gone here. One still in operation after more than 100 years is the Montecito Creek Water Company, a group of estate owners who draw water from Hot Springs Creek. 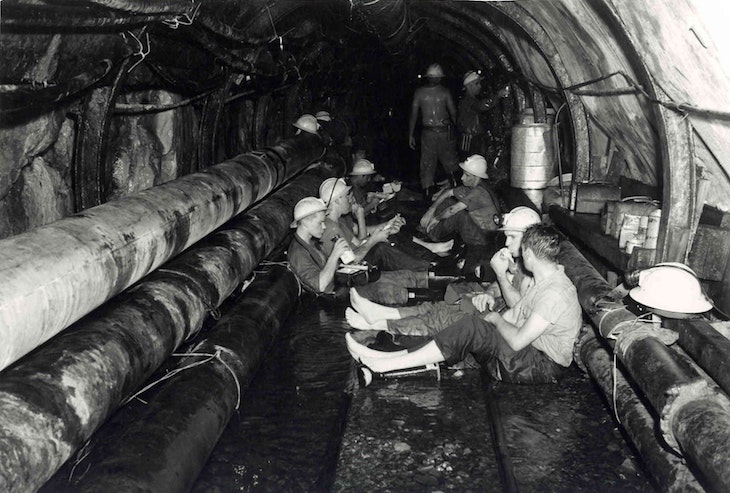 Workers cool down during construction of the Tecolote Tunnel in 1955. They braved scalding water, cave-ins and methane gas to finish the job, connecting Lake Cachuma and the South Coast. (Photo courtesy of the Santa Barbara Library Edson Smith Collection)

Drought & Flood was a local effort and is dedicated to Art Sylvester and Donald Weaver, the UCSB geology professors, now emeritus, who gave Hoover his start in the field, 50 years ago. Sylvester, Hoover said, edited the book and “hacked my stuff up,” treating him like a student of 19 again.

The book is also dedicated to the Montecito Water District board and general manager who hired Hoover as a consultant from 1980 to 1985. They were, he said, “the most logical, rational and practical group” he ever worked for – although Henry Muller, the late Carol Valentine, and then-General Manager Chuck Evans later became ardent supporters of state water.

Hoover says Evans saw a draft of the book and told him he “really should soften” his criticism of state water. But Muller, now 103 years old, called to say liked the book so much, he was reading it for the second time.

David Wilk, an Ojai editor, wrote parts of some chapters. Erin Graffy, a Santa Barbara author, provided art direction and historical research and published the book. Drought & Flood is available in a $25 hardback edition and a $20 paperback at the Tecolote Book Shop in Montecito, Chaucer’s Books in Santa Barbara, Amazon.com and Hoover’s website, hoovergeo.com.

Melinda Burns volunteers as a freelance journalist in Santa Barbara as a community service. She offers her news reports to multiple local publications, at the same time, for free.

This sounds like a great book, and as a long-time resident, I sure agree with him that we should have rejected state water. Paying for 100%, and getting 30% at best is a great example of the boondoggle that California government has become.

Considering the population difference between "ancient Chumash" & today's citizenry..
As well as western attempt to anthropomorphize us..I must say, that not only was there no need to fight over water..
we are not "Western greedy", don't hoard for sale natural resources, only used water for drinking..but there is no historical record within our oral teachings, that suggests a "war" over water due to drought.
Did'nt happen..

So glad to see crack reporter Melinda Burns still at it!
I have not yet read the book, but definitely want to. Along with Melinda and others, I was a reporter (County News Service) writing about water, especially during the controversy over taking State Water. It finally passed mostly because voters panicked over drought conditions. And if my memory serves, almost as soon as SB got into the State Water project it rained and rained and rained!
Oh well. Now west Ventura is thinking about the State Water Project. I'd prefer to see a robust system of conservation, watershed protection and revitalization, recharge systems, bioswells, recycled water and many other options.

Ventura already gets some state water through the County who has rights to 20,000 af/yr but rarely takes much of it. Usually sell it to other people. Ventura takes water out of the Ventura River and is building a pipeline to be able to transfer it to the east end because it is much better quality than what the east end currently gets.

Was wondering what Melinda was up to. She has been quiet for a while now. Good to see her back and uncovering more great stories.

State water is really a boondoggle unless you are one of the senior water rights holders and first in line to get your allocation. For the rest of us, when we really need it, there isn't any available, and when it is plentiful we can get cheaper water from other sources. Mostly I think we just sell ours to behemoths like MWD to offset some of the annual costs of the program.

Totally agree with his ideas about desal and our preposterous state water deal!

Thank you for the book and review. Hoover is a legendary water expert. We should listen to him and heed his advice.

The experts all say school

Only elementary schools are

Why on Earth would there be a

Homeless are here to stay.

Nevermind they are now