The Santa Barbara Public Market is turning 8! The market and an adjacent building were sold to local Winn and Twining families earlier this year.

The market on the corner of Chapala and Victoria Streets in Santa Barbara used to be the home of a Vons grocery store and parking lot. It opened in 2014 with a grocery store, butcher, and cheese shop fashioned after the Ferry Building in San Francisco where visitors shop daily for fresh groceries. The concept didn't exactly catch on with Santa Barbara residents and the market pivoted to a "premier food hall" featuring beer and wine service with merchants selling ice cream, sushi, pizza, noodles, and tacos.

The market's new owners are hoping to fill the market with new ideas to make it more of a community meeting space.

“New restaurants often burn through their start-up capital before they’ve even had a chance to market themselves and open the doors to customers,” Twining said. “What’s special about a food hall like Public Market is that it allows chefs and entrepreneurs to try a concept in a space that is ready to go with minimal start-up cost, and customers are already there.”

The vacant 3,900 square-foot building next door is currently being renovated into an event center for the public can rent for private events. “The space should be able to accommodate about 200 guests,” Twining said. “And best of all, the food for your event can be catered by the great restaurants next door at the Market.”

The market held an informal anniversary party with discounted prices on Thursday as well as a gift card giveaway contest on social media.

Speaking of the Public Market, there are two new restaurants that have joined the food hall, see below. 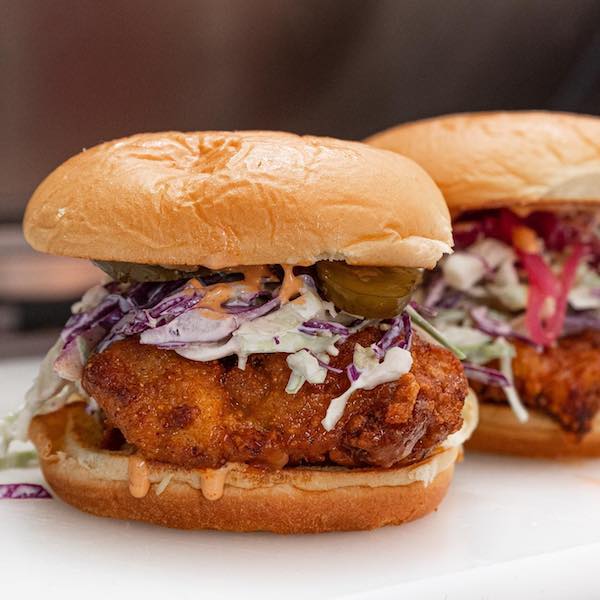 They offer a "Shooby Burger" complete with American cheese, caramelized onions, and a special sauce paired with hand-cut fries. It's open from Monday – Sunday, 11:00 a.m. to 9:00 p.m.

Matty's Hot Chicken began as a pop-up and is now a long-term tenant at the market. As the name suggests, they serve at least six versions of a chicken sandwich of varying spice levels, chicken plates, and chicken wings.

Additionally, Corazon Cocina has become the first restaurant in the Market to serve breakfast, where Chef Ramon Velazquez created a special menu accompanied by Handlebar Coffee for visitors in the morning hours. 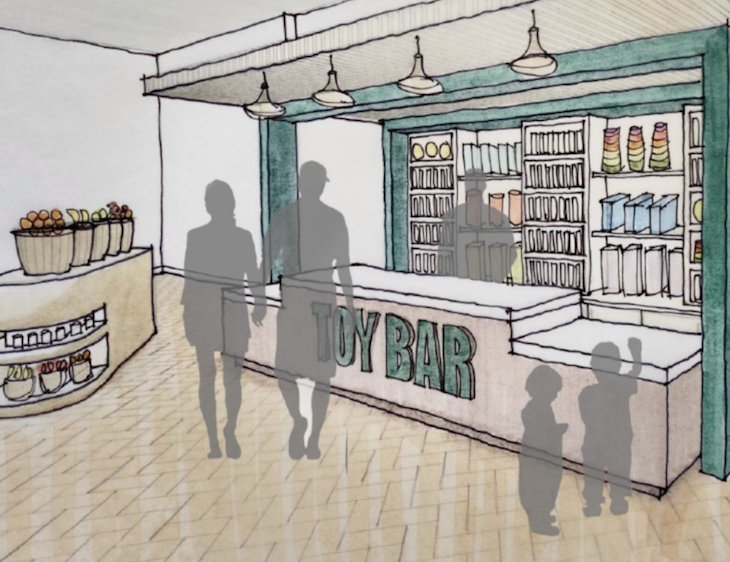 The brand new two-story building at 28 W. Figueroa Street in downtown Santa Barbara has its first tenant. Bungalo805 will occupy the 5,000 SF space with the goal of being social club for families with young children.

“As Santa Barbara welcomes more young families, it has never been more important to foster and support this community of young children and the loving support system around them,” said Bungalo805 founder and mom of 3-year-old twins Erin Kanaley. “Bungalo805 and our new Littles’ Lounge & Social Club is just that. A private, members-only space created to support local families. A safe, fun space for your littles and an elegant, comfortable experience for grown-ups.”

According to a recent press release, Bungalow805 will transform the entire building into a social oasis for families. “It’s a place where you can enjoy time with your littles, a glass of wine and be social… all at once. A place where all the corners are rounded, the doors are childproof and the floor is clean. A space where your kids can roam and play, but they can’t escape. A spot where schedules don’t
exist, friends will always be around and the fridge is always full. A place where you can be comfortable, your child can explore, and everyone can just breathe,” said Kanaley.

A sample membership includes a soft playroom with toys, family lockers, a toy bar, a fully loaded micro kitchen, wifi access, events, and more. It's unknown when the club will open and pricing is not yet available but membership reservations are available at www.bungalo805.com

DÔEN, the Los Angeles-based clothing brand founded by Katherine and Margaret Kleveland (born and raised in Santa Barbara) opened last week. The shop will reportedly feature timeless styles from their collections of dresses, tops, bottoms, accessories, childrenswear, home and swim. It's open Monday - Saturday: 10am to 6pm and Sunday: 11am to 5pm.

Heather Taylor Home has opened a pop-up featuring Los Angeles-based Heather Taylor's line of home goods and textiles. The collection includes pillows, bedding, and other accessories that instantly elevate a space with color and pattern. The pop-up is open Monday - Saturday: 10am to 6pm and Sunday: 11am to 5pm.

In a location that always seems to be turning over, 505 State Street, a new taco restaurant has opened. But it's not the same as the two other taco places that were there before, the former home of Crazy Jim’s Tacos y Mas, Ana’s Taco Bar, and Mad Dogs.

The Restaurant Guy reports Casa Comal has a soft opening today with a grand opening next week. They offer at least ten different taco styles as well as sopes and quesadillas.

It seems like the restaurants are always changing in the Public Market. Is it too high of rent or restrictions or something? Or maybe there's too much competition in a high-end food court.

The family social club seems interesting. Curious about the pricing and what you'd get for it. If it's basically a hangout spot then families could just meet at a coffee shop or park so they'd have to offer something pretty good to justify the cost. And I'm assuming it won't be cheap given the location so I get that the business has to sustain itself. Curious to see how it shakes out.

Is Alma Fonda Fina the place that Montecito Country Mart wanted instead of Little Alex's so they pushed out the longtime beloved Mexican restaurant for a trendier upscale restaurant?