The program is operated by Bcycle who will provide and maintain 250 electric bicycles and 30 stations located throughout downtown and the waterfront areas, with the possibility to expand to other neighborhoods.

Members of the public will be able to unlock a bicycle using a mobile phone app that charges a rental fee based on the time used and can be returned to any dock location.

"Communities with bike share programs have reported many benefits including increased health and wellness for its communities, a zero carbon emission choice for transportation as well as increased patronage of businesses near the bike dock locations," stated the Downtown Santa Barbara Organization in an email.

The in-street bike dock locations for the initial pilot program in the downtown area include:

Downtown businesses are also able to purchase an annual membership for employees to use the program.

The Bcycle app can be downloaded in the App Store or Google Play Store.

The program is expected to officially launch early next year. 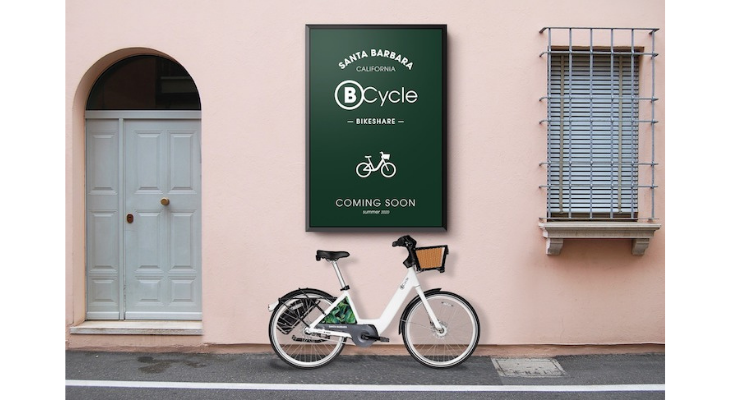 I agree with other readers that this on-street bike rental is in direct competition with other ebike rentals already established in the area, especially on the same block, as is the case for e-bikery. From what I understand the original location was supposed to be directly in front of e-bikery! Wow who makes the decisions? At least it got moved up the block, I guess.
I was under the impression that this on street rental program was presented to the city as a benefit to locals, in that they could utilize these bikes for work and errands, thus lowering the car traffic. Great idea if they were out in places locals would actually use them in that way. Instead they are in the tourist corridor - nowhere near the neighborhoods that would use them in the way they were proposed. They are simply for a visitor ( or possibly a local) that happens to have already driven to the downtown area and wants to ride around for fun.
And what happens when I go to return my bike where I rented it and the spot is already taken by someone else that decided it to “return” their bike to that spot, instead of where they pick theirs up? Now I have to wonder around looking for other docking stations - still renting my bike - to find an empty spot to return it. Oh, I guess they will decide they need more docking stations available! Sadly I see problems coming really soon.
And the charging? That will apparently be done by someone driving around at night changing out the batteries.
What happens if you have a bike malfunction? I know that If you have any problem with your bike when you rent from e-bikery, they come to you with a replacement bike! There is something to be said about renting from an actual person.
Do you all recall the bank of rental bikes that were placed in Paseo Nuevo, next to Macy’s across from the pretzel place? Never did take off and disappeared as suddenly as it appeared. Times are a changing, this might be the future.... I just wish it was playing out like it was presented- for the benefit of local people, and we saw them in the neighborhoods that might use them, not just in the small State Street tourist corridor in competition with the other established bike and e-bike rentals no doubt paying high rent.

As a local for 60 years I was sad last night when I tried to drive up state street to see Christmas lights and decorations. You are ruining the charm of old Santa Barbara.

They will be destroyed soon. Or missing

Shame-yep, remember the electric scooters? That didn’t last long, I saw many thrown around on the sidewalks, especially in Isla Vista. I agree Santa Barbra has changed for the worse. There was nothing wrong with it but as usual the elites come in from elsewhere and want to make it “better”, sometimes things are already the best they can be.

Are these really electric bikes? I ask because I noticed the bases are installed without electrical connection, and the bike does not look electric - notice the real wheel hub.

Interesting, thanks, SBWALKERS! I heard subsequently that at a council meeting Mr Dayton, who has been shoving all his pet ideas into the council's maw, said that the company will charge them at night. Don't know if this is so or not. But still these will be in competition with e-Bikery and that seems unfair and wrong when on the other hand the Council has been pushing for patronage of local businesses.

OK, I notice the motor is probably in the pedal hub, but the stations cannot be charging stations because there are no electrical connection that I can see. In the picture and I looked at them in the street when they were installed... no electricity that I could see... boggles the mind. I agree with the other writers that the city, by allowing these, is turning their backs on the bike businesses - not a good thing, especially now.

Will people be able to coast all the way down state to cabrillo? Currently you can’t, I would be pissed as tourist if I was cruising down towards the beach and then all of student had to dismount or face a fine. They will need to work out some bike lanes but that should be easy when all the restaurants and shops on state start closing from not making any money. SB are you listening? You can’t have more tourist without a reason for them to come or are you expecting people to come visit SB to see the luxury apartments you plan on building all down State St?

Guess they were in denial when doing market research. There are about a dozen hotel (who have copies Hotel Milo) with free bikes for hotel guest. $7 per hour, per bike is expensive for visitors or locals who can walk quick brisk 1.5 mile walk from Arlington to the Pier.

It’s to make our city appealing to hipster tourists, and so the city council can feel like they are doing something about traffic congestion. I’m cynical by nature, but I do hope it works out well.

In addition, RHS, there's are private e-bike rental stores in Santa Barbara, one of which is on 500 block; another a block or so away. I wonder how they like have the competition from the City Council-supported ebikes?!

Another sell out of the city to the business people. What possesses the staff and elected officials to buy into the idea that private for profit enterprises have any interest other than feathering their own pockets? Putting these installations in spaces that the public ordinarily and regularly uses is pretty awful. Worse than allowing restaurants to usurp public sidewalks to the inconvenience of pedestrians. But this smacks of the work of the bicycle mafia that has infiltrated city hall. They are on a crusade to impose their values and likes on the rest of us. I like bicycles. But I don't see that this is that beneficial to our community. Electrified bicycles are minimal at providing "exercise" and the increased proliferation of a group that has never thought it should obey traffic and other laws is threatening. No one can really suppose that the use of these machines will, for example, reduce commuting time, lighten automobile loads on the highways, or make us healthier. It is sort of like putting in zip lines in otherwise pristine places. Fun for the visitor and profitable for the vendor but not so good for the world around them.

Any way to make a buck.

Since these charging stations are in public spaces, on public sidewalks, seems to me they should be designed to charge any/all electric bicycles, not just those of the Bcycle corporation. How much are they paying the city for the use of the public space? Is it per space or per bike usage?

The bike docks are right in the middle of the bike lane on State Street, so I suppose this means that a decision has been made to keep State Street closed for the duration of 2021, assuming there's a contract of some sort (which there must be, if people can purchase an annual use permit). And, moreover, bikes will be allowed on State, electric or not, and not just in the (former) bike lanes.

Personally, I'm fine with all of the above, but I have a feeling there will be pushback. LOL.

I, too, was surprised by their location. If/when State Street opens up again, I guess they’ll have to pay to have them moved. I wonder how the bikes are charged?

I guess the usage agreement with these bikes means the city doesn't have any liability if people get injured? I see people flying on those bikes, more like a motorcycle than a bicycle. Those flimsy bike helmets are not much protection in a falloff at 25 mph or in a collision.

I am so glad that this is FINALLY happening. All over Europe there are bike-share programs, and have been for years and years. I don't know why it takes so long for a completely eco-conscious city like Santa Barbara to take so long to catch on. It's like we lea the nation in talking-the-talk, and up until now not talking-the-talk. The bikes appear to be of high quality, but I wonder about the plan to mitigate the damage inflicted on cycles, theft, slashed tires/seats, and so on My guess is that somewhere hidden within the cycle is a GPS tracker when some yahoo decides to cut one loose and throw it into Mission Creek when done joy riding. SB is such a cycle-friendly city, and I hope this program is a success (unlike those little scooters littering sidewalks/streets and dumped into the bushes.

I hope that you're right about the GPS trackers because these things will disappear in short order without them.