In a sweeping decision that puts a seal of approval on the county’s embrace of the fast-growing cannabis industry in rural areas, a Santa Barbara County Superior Court judge this week tossed out a citizens’ lawsuit that sought to shut down a 22-acre cannabis hoop-house operation on Highway 246.

Noting that “this is a very important case,” Judge Thomas Anderle ruled on Tuesday that the county’s environmental review and zoning permit for Busy Bee’s Organics, a mile west of Buellton, were fully in compliance with state laws and county land-use policies. The right time to sue, he said, was back in early 2018, when the county Board of Supervisors certified an environmental impact report and adopted ordinances governing cannabis cultivation and licensing.

The judge roundly dismissed allegations by the Santa Barbara Coalition for Responsible Cannabis, the plaintiff in the case, that the county failed to consider or address the impacts of the burgeoning industry on vineyards, orchards and row crops and instead swept them under the rug.

The coalition was asking the court to halt operations at Busy Bee’s and order the county to review whether the stench of marijuana plants from the expanding cannabis operations west of Buellton, including Busy Bee’s, was hurting the lucrative wine-tasting business; whether conflicts over pesticide “drift” from traditional crops onto cannabis were posing problems for farmers; and whether the smelly gases, or “terpenes,” given off by cannabis could be absorbed through the skins of wine grapes, “tainting” the quality of regional wines.

Anderle complimented all of the attorneys in the case – Marc Chytilo and Ana Citrin for the coalition; Amy Steinfeld, Beth Collins and Cody Sargeant for Busy Bee’s, and Michael Ghizzoni and Lina Somait for the county – on their “very high-quality” and “professional” briefs. But he said that the defendants’ attorneys had “vastly too many arrows in their quiver, many of which are fatal,” for the coalition to prevail. He agreed with Steinfeld’s contention that the lawsuit was “not about Busy Bee’s Farm” and “appears to be rooted in regret” that nobody sued the county over cannabis three years ago.“The time for challenging the sufficiency of the original EIR has long since expired and the question is whether circumstances have changed enough to justify repeating a substantial portion of the process,” Anderle stated. He concluded that no additional environmental review was required.

In a written statement on Tuesday, Sara Rotman, a co-owner of Busy Bee’s and a defendant in the case, said that Anderle’s ruling was “clear, well-reasoned, and sends a strong message that misusing environmental lawsuits as a weapon against the most sustainable and regulated crop in the world is a losing strategy.”

“The path to this legal victory has been long and, at times, painful,” she said. “I’m anxious to return to farming full-time instead of spending so much time fighting off meritless litigation.”

Blair Pence, the coalition president and the owner of Pence Vineyards & Winery on Highway 246, west of Busy Bee’s, said Tuesday that the group would appeal the ruling.

“It is certainly disappointing that the court summarily dismissed the opportunity to fix something that has gone so far awry,” he said.

The 30-day statute of limitations on a challenge to the cannabis ordinances after the board’s vote on Feb. 27, 2018, appears to have been the county’s strategy from the start, Pence said. “‘ – Act fast and quietly, hoping nobody understands before it is too late.’ Hopefully, an appeals court that is independent of local politics will see things differently.” 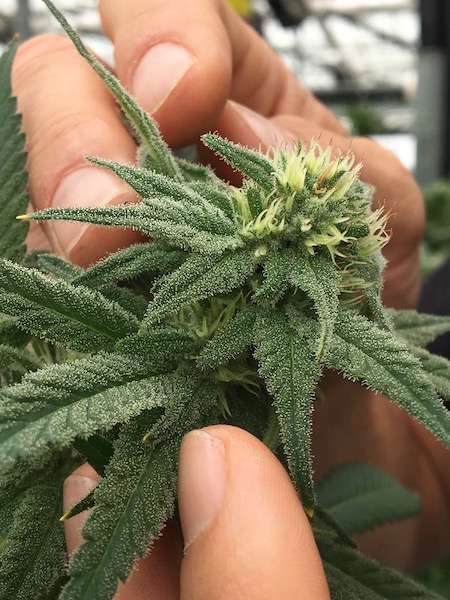 In his ruling, the judge said that evidence of “terpene taint” on wine grapes from the smelly gases of cannabis was “speculative.” Photo by Melinda Burns.

The coalition, a nonprofit group of about 200 farmers, vintners and residents from the Cuyama Valley to the Carpinteria Valley, has filed four cannabis lawsuits and two dozen appeals of cannabis zoning permits in recent years, pressing the county supervisors to rein in an industry that coalition members view as disruptive and out-of-control.

To date, the group has won voluntary concessions from some growers on odor control, but the supervisors have resisted pleas by hundreds of residents and the county Grand Jury for an overhaul of the cannabis ordinances.

Chytilo, the coalition’s attorney, said that in early 2018, “Nobody recognized what the consequences of cultivation on this scale on this community would be.” The coalition had not yet formed; in the wake of the deadly debris flow of Jan. 9, 2018 in Montecito, South Coast residents were still in mourning.

But even today, Chytilo said, the coalition is not anti-cannabis.

“We don’t want to block the industry; we just want them to be as responsible as they can be,” he said.

The Busy Bee’s lawsuit was the first of three filed by the coalition against the county and the owners of outdoor cannabis “grows” on Highway 246 last year, including West Coast Farms and Castlerock Family Farms, all of them in the scenic wine-tasting region between Buellton and Lompoc. Within this region, applications for nearly 800 acres of outdoor cannabis are in various stages of county review for the Sta. Rita Hills, a federally-designated American Viticultural Area.

The Busy Bee’s case is believed to be the first to seek stricter regulation of outdoor cannabis cultivation based on alleged violations of the California Environmental Quality Act. Tuesday’s ruling signals the potential pitfalls of that strategy and suggests that the coalition will face an uphill battle in its future court cases.

In 2018, the Santa Barbara County Board of Supervisors reviewed 12 “significant and unavoidable” environmental impacts associated with the cannabis industry – including the noxious smell of pot and the adverse effects of cannabis operations on neighboring farmland – and discounted them all in a “statement of overriding considerations.”

The board said it wanted to make way for “a robust and economically viable legal cannabis industry” and to promote “continued agricultural production” in the face of “competition from foreign markets and rising costs of water supply.”

“There is not a project in the history of the county that has had that many significant impacts,” Chytilo told Anderle.

The record shows that the first farmer to object to Busy Bee’s was a nearby avocado grower who claimed she had been forced to change the type of pesticide she was using so as not to contaminate cannabis, to the detriment of her own crop.

In another incident, Steinfeld threatened to file a report with the county and demand reimbursement for any damage to marijuana plants if the pesticide sprayer for a neighboring vegetable farmer failed to notify Rotman when he planned to spray. Rotman later entered into an agreement with the farmer’s landlord, agreeing not to sue him, his tenant or the sprayer for any pesticide “overspray.” Rotman also promised to pay the landlord more than what his tenant farmer was paying in rent, if the tenant should withdraw from the lease.

Anderle found that the threat of liability from pesticide “drift” and the potential harm to wine grapes from “terpene taint” – “even if it were shown to exist”– were not “agricultural land-use conflicts” as the coalition was contending, but rather economic impacts not covered by state environmental law.

The judge also upheld the county’s decision to designate cannabis cultivation as an “agricultural use,” making Busy Bee’s eligible for tax breaks under the Williamson Act, the state law that helps protect farmland from urban development.

Anderle rejected the coalition’s contention that under this law, the county should have investigated whether Busy Bee’s was compatible with neighboring row crops, avocado orchards and vineyards. There was no evidence, the judge said, that these farms, all of them protected by the Williamson Act and in operation for many years, would go out of business because of conflicts with cannabis.

With regard to “terpene taint,” the judge said that “speculation is not substantial evidence.” He cited Busy Bee’s studies showing that “no terpenes could be detected outside of the boundaries of the property.”

Finally, in one last blow to the case against the county and Busy Bee’s, the judge dismissed the coalition’s claim that the county violated its own zoning ordinances by allowing Busy Bee’s to illegally expand a “legal, non-conforming” medicinal marijuana “grow” without proper permits.

Alone in California, the county allowed growers of medicinal cannabis to continue in operation after early 2016 under “legal, non-conforming status” and temporary state business licenses, so long as they applied for a county zoning permit and county business license. In November of 2016, California voters legalized the sale, use and cultivation of marijuana for adult recreational use.

In its lawsuits, the coalition contends that many of the former medicinal “grows” in the county have been expanded well beyond their early 2016 acreage. But the county doesn’t keep track.

During county hearings on the Busy Bee’s project, displaying Google Earth photos, Chytilo estimated that the operation went from one greenhouse in 2015 to six hoop-houses and 16 greenhouses in 2018. Last year, the county retroactively approved the expansion when it granted a zoning permit for Busy Bee’s; county planners explained it was simply what they would normally do, say, in a case involving the illegal addition of a third bedroom. Chytilo said that a retroactive permit “incentivizes bad actors.”

“Local governments have the discretion to decide how to allocate their limited budgets, including by focusing their efforts on bringing properties into compliance rather than investigating past violations of legal nonconforming use by those satisfying the zoning restrictions and development standards under the Cannabis Regulations,” he stated. “…Petitioner’s arguments related to the Violations of Planning and Zoning law fail.”

It’s hard to stop anything that generates big tax revenue.

Especially when they are doing it legally

When do we get to vote for this judge again? Can we get someone with some common sense to run against him?

Anderle is a retired judge who sits by assignment. He does not run for election. He has to be well into his 80s now. He has been around forever and has been generally respected but seems always to get the controversial cases that "elected" judges avoid.

I feel sorry for all the homeowners in Buellton- They will soon be experiencing the woe's of the Carpinteria Valley.... times 100. 100's of acres of Outdoor grows without any odor or controls is insane within earshot of homes... This is ALL on Joan Hartmann and Pot Inc's "Go To Guy" Steve Lavagnino

It is full of fuddy duddies, hopefully the weed Renaissance will bring a younger, hipper crowd into town.

It's a legal commodity. Grow it!

Some of you may not like Judge Anderle's ruling, some of you might. This ruling is only one case out of thousands upon thousands that he has ruled upon. Whether or not you like his ruling on this matter, he's an excellent judge. We are, and have been, so lucky to have Judge Anderle in our community. He a tremendous asset.

It smells AWFUL! I feel sorry for anyone who has to live in the area of a cannibis farm. And I worry, deeply, about the pesticides used!

Hmm. The potheads vs. the wine snobs. What are we coming to? How about real agriculture, like growing food? Real food. No one can live on either of those agricultural products. We're in trouble.

The leftist anger is actually

I miss Roger as well. Tagdes

Below is a link to the

Downtown is dirty, has few

you aren't missing anything

Alex, i back up Toot. She

?? Is there a need for more