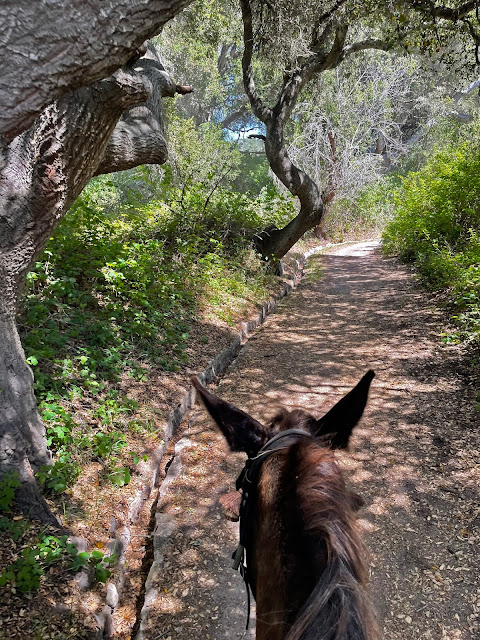 The dappled light coming through the oaks falls on a path at La Purisima Mission. On the left is an ancient aqueduct water channel. What an eccentric route we took!

Because we didn't have a plan. We started at the parking lot staging area and I hadn't ridden up onto the Western Mesa for many years so I asked Jamie to lead the way. 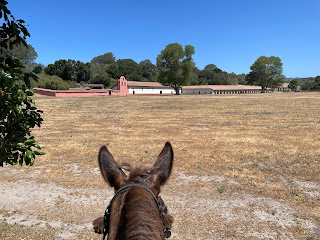 That route took us around the back of the Mission buildings, and up a sandy path. 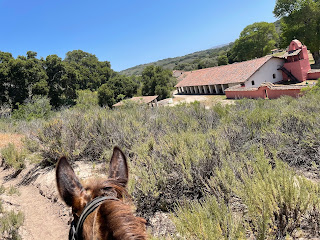 We are not allowed to ride onto the part of the Mission grounds where the restored buildings are, so for once it was nice to look down onto them. 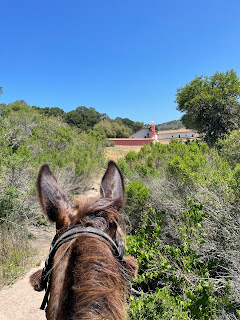 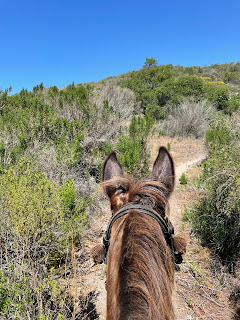 Climbing through the chaparral the scent of the sagebrush as we push through the bushes is wonderful, taking us out of the urban life and into the natural world.

At the top of the hill TobeMule stood very still for me to take this panoramic view looking out over the valley toward Lompoc. 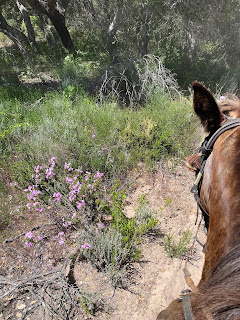 Spring is definitely here, and everywhere the bushes are alive with tiny flowers. Pinks, and yellows and whites, most very tiny and difficult to capture with an iPhone from the back of a mule, but carpeting the sandy scape. 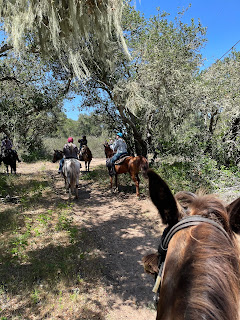 Every so often we'd stop to give the animals a rest under some shade.

This tree was festooned with hanging Spanish Moss, which gives an eerie look.

The Mesa has sections of trees, then open spaces, then trees again. Out of the trees we'd look across to the other parts of this very large property. 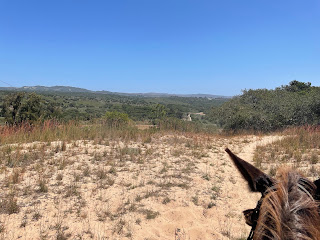 And off to the horizon to the East are distant mountains and what must be nearby ranches. 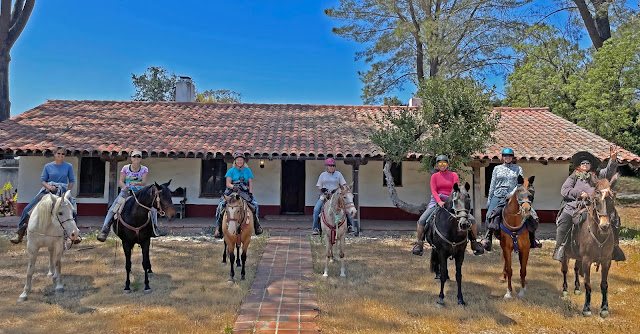 Then all of a sudden we came across what was labeled "Employee Housing" and this classic old building seemed like just the place to take a group photo. 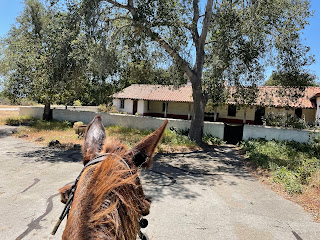 This building is also in the Californio Mission style, but I could not tell if it dated back to the Mission days or if it was a recreation of that look. 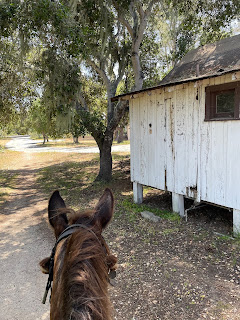 This rather trashed outbuilding was actually a bee hive!

As we passed by I could see bees entering the cracks on the side and I'm imagining the inside of those walls is filled with comb.

We were sensible and did not go in for a closer look. 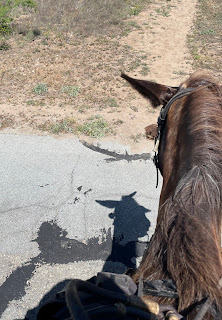 Then we were back out on the trails, crossing old cement and asphalt roads and then back to deep sand. 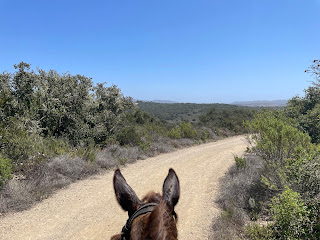 We saw at least 100 people walking on the wide dusty roads, and maybe 30 on bicycles.

The walkers were lovely. Tobe had his golden Mulicorn horn on and Woody was sporting a silver Unicorn horn, so we amused the children out with their healthy parents. 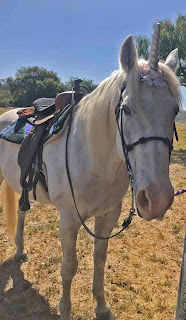 Woody is a good sport, he's a been-there-done-that sort of horse.

And if we tell him to wear a bit of costumery, he's game.

C.C. enjoyed telling children that of course this is a real Unicorn!

Many of the parents had little kids on bikes, and the vast majority knew the drill, asked their kids to stop, and not spook the horses. In return we let the kids pet them, and had a bit of pleasant conversation. Lovely to share the bright shining afternoon. 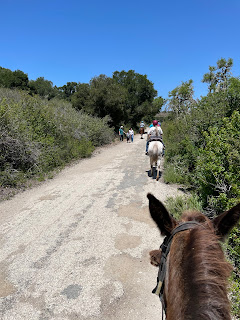 The wide trails here are big enough for the Park Rangers to drive on, so there is usually plenty of warning when there is someone else on the trail. 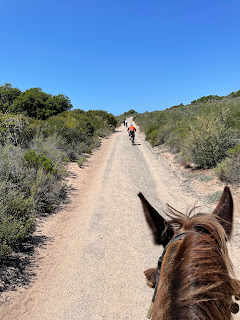 These guys were riding up behind us and TobeMule alerted to me that something was coming. So I just turned him around and chatted with the guys, asking them to go slowly past us and when they caught up with the rest of the group to call ahead and announce their approach.

They were easy to interact with.

But soon after two guys came riding at full speed down upon the group and skidded their bikes to a stop mere feet from the horses. There was a bit of consternation, and I started to ask them nicely to in the future keep a look out and slow down and stop when horses, who have the right of way, are on the trail. Their response was to shout "Good luck training those stupid horses!" as they sped off.

Guys like that make it difficult for us to support multi-use trails.

One handsome fellow on a bike stopped to let us walk past and when I complimented him on his trail etiquette he said "I ride horses too, so I know." 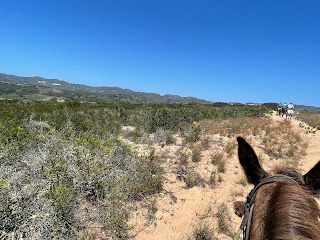 Once we were back out onto the deep sand paths there were no bike tracks, and we could relax and enjoy the vistas of distance. 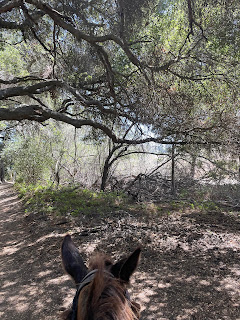 And then it was time to descend toward the parking area, and we passed through another forested area. 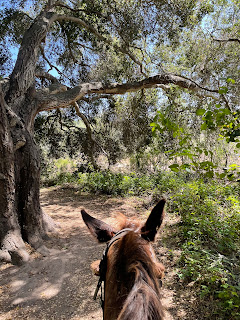 Passing from the wind-swept scrub up on the Mesas and then coming down into the forested area is a special part of riding here.

We really were on a ramble, going down new paths and recognizing some and discovering others. 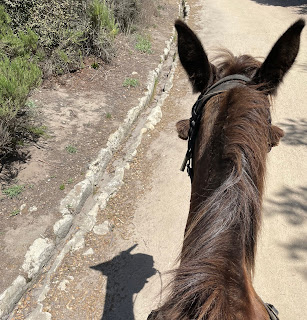 And through it all my sturdy four-legged pal found the way.

Another day in good company in interesting landscape,

and miles to go before we sleep.