Bears Burned in Thomas Fire Return to the Wild

Two talented veterinarians, an environmental scientist and several dedicated staff members at the CDFW Wildlife Investigations Lab recently put their heads and their resources together to help heal a pair of adult bears that were badly burned in the Thomas Fire. The bears, which were treated at the same time as a young mountain lion with similar, less severe burn injuries, were released back to the wild last Thursday, after several weeks of intensive – and unusual – care.

CDFW Senior Wildlife Veterinarian Dr. Deana Clifford was acting manager of the Wildlife Investigations Lab in Rancho Cordova when the first bear – an adult female weighing about 200 pounds – was captured inside of a backyard aviary in the Ojai area on December 9. With CDFW Environmental Scientist Christine Thompson coordinating, CDFW Wildlife Officer Jacob Coombs darted the bear and local veterinarian Dr. Duane Tom evaluated its injured paws and overall condition. Thompson then conferred with Clifford, who determined the bear might have a chance at recovery if treated quickly. The bear was put into a trailer for the seven-hour transport to Rancho Cordova, where Clifford was waiting. 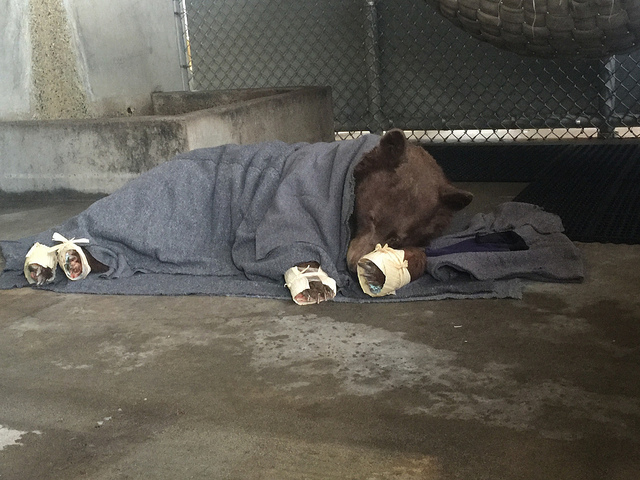 By the time the bear arrived, Clifford had already reached out to Dr. Jamie Peyton, Chief of Integrative Medicine at the UC Davis Veterinary Teaching Hospital, for help. Weeks earlier, Peyton, who works mostly on domestic animals, had mentioned to Clifford in passing that she had a particular interest in animal burns, and would be interested in helping wildlife if the chance ever arose.

Peyton created a homemade burn salve for the bears’ paws, and a process for sterilizing tilapia skin. Fish skin, which contains collagen, is often used by doctors in Brazil to bandage human burns. The technique is not yet approved by the Food and Drug Administration for use in the United States, and had not been tried on veterinary patients.

To help keep the tilapia skin in place, Peyton cut pieces to exactly match the size of the bear’s paws and then sutured them over the wounds while the bear was under anesthesia. Additional temporary wrappings, including rice paper and corn husks, were added, with the intention of stretching out the amount of time it would take for the animal to chew down to the fish skin bandage. “We expected the outer wrapping to eventually come off, but we hoped the tilapia would keep steady pressure on the wounds and serve as an artificial skin long enough to speed healing of the wounds underneath,” Peyton said. She also used acupuncture to aid the bear with pain management.

The original plan was for Peyton to come to the lab weekly to check on the bear’s progress. But within just a few weeks, two more burn patients arrived from the Thomas Fire. A second adult female bear, found relatively close to where the first one was found, was brought to the lab by Thompson on December 22. And on December 23, the young mountain lion arrived from Santa Paula. The experimental tilapia treatment was extended to the two newcomers as well.

Of the three animals, the mountain lion’s injuries were the least severe. Because of his young age, he was earmarked for placement in a wildlife rescue facility. The two bears were in much worse condition, with oozing wounds and, in some cases, paw pads that were completely burned off. But because the bears were older and stronger, the veterinarians hoped to return them to the wild if their injuries could be healed.

To complicate matters further, on December 28, during a routine burn treatment, Clifford’s team performed an ultrasound on each bear, and found that the second bear was pregnant. The quest to heal the mother-to-be was now a race against time.

“That was a game changer for us, because we knew it wouldn’t be ideal for her to give birth in confinement,” Clifford said. “We aren’t really set up to have a birth at the lab holding facilities, and we knew there was a high probability that she could reject the cub, due to all the stress she was under. We needed to get her back into the wild as quickly as possible.” 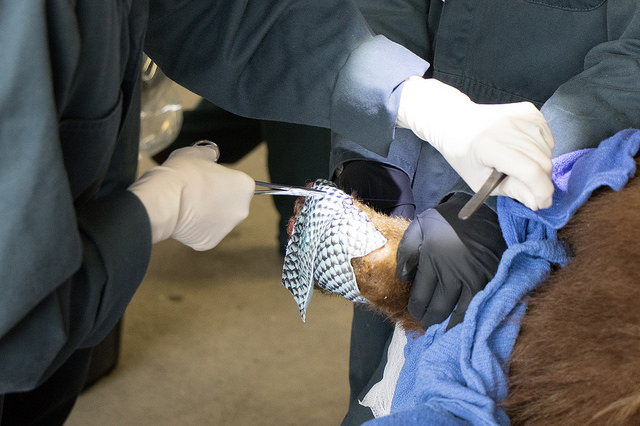 While Clifford and Peyton continued to focus on healing the animals’ injuries, Thompson started scouting out potential release locations. Since both bears needed to be transported back to Southern California, it was decided to try to return them at the same time – albeit not exactly in the same location – in order to make the best use of staff time and resources.

Both bears’ original habitat had been destroyed by fire, so Thompson scouted for two new locations that fit several parameters. The bears needed to be close to their home range, but not within the burn area, and near ample food and water sources. She also wanted to keep them as far away from each other as possible. “A lot of wildlife habitat was destroyed by the fire, and there are already a lot of displaced animals roaming around,” Thompson said. “So there’s a good chance that whatever location we choose is already occupied by other bears, but only they know exactly where that designated territory is. The best we can do is make an educated guess, and place them as deep into wild lands as possible.”

Taking the rapidly changing winter weather reports into careful consideration, the team chose Wednesday, January 17, as the target date to get on the road. That morning, Peyton came to the Wildlife Investigations Lab one last time and both bears were immobilized for a final treatment for their feet. Then the bears were placed into separate transport trailers for the long journey home. Simultaneously, in the Los Padres National Forest, Thompson and Tom spent the day digging dirt and moving logs to create a winter den for each bear. 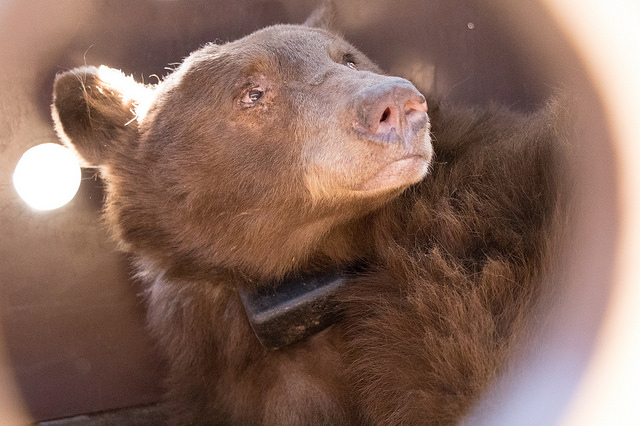 “At this time of the year, most bears have established dens for the winter, but since these bears won’t have time to create a den, we hope to improve their chances of survival by creating a den for them so they have a home base and shelter right away,” Clifford explained.

The team arrived late Wednesday night, and both staff and bears were hosted overnight by the Ventura County Sheriff’s Department. Early on the morning of January 18, Clifford, Thompson, Coombs, Tom and their team drove the bears deep into the forest for the final leg of their journey. One at a time, each bear was sedated and carefully placed into her den, while the team finished constructing a shelter around the slumbering animal. The bears are about five miles apart, as the crow flies, and each is wearing a satellite collar so CDFW can monitor her movements and survival post-release. Staff also placed trail cameras near each den.

“We’re really hopeful that these novel treatments accelerated the healing for these bears and provided them the best odds of survival,” Clifford said. “It’s especially good to know that we’ve maximized the odds of survival for the cub on the way. We don’t know exactly when it will be born, but hopefully we’ll be able to monitor the movements of the mother via satellite, and that will give us an indication of how things are going.”

For Clifford, the entire experience wasn’t simply about saving the lives of two bears. The bigger picture involves the body of knowledge the experimental treatment provided – both to the Wildlife Investigations Lab team and to the UC Davis Veterinary Teaching Hospital. 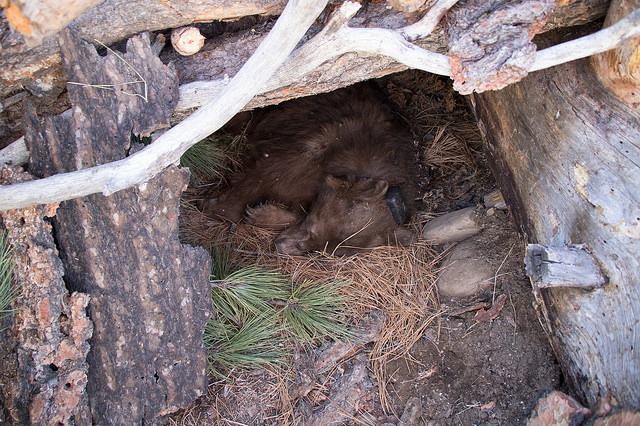 “This treatment has the potential to be used successfully on all kind of burn patients, both domestic and wild,” Clifford said. “For us, at the Wildlife Investigations Lab, it’s been an invaluable experience because California’s changing climate means that we’re likely to see more wild animals impacted by catastrophic wildfires. By better understanding what resources are needed to care for injured wildlife and what treatment techniques increase healing speed, we can make the most informed treatment decisions, reduce animals’ time in captivity and provide guidance to other facilities caring for burned animals.”

Write the mayor and members

MAC: You said it, the

SHASTA: How long did it take,

Where did you get the number

CSF: if I get my act

Outrageous and sad. This

Nice dodge away from