Amid scorching temperatures and surrounded by swarming flies, Sydney Parkinson sketched hundreds of floral specimens in a makeshift hut in Tahiti. A young botanical illustrator, Parkinson would later die of dysentery — one of 30 casualties on James Cook’s 1768-1771 voyage to Australia and New Zealand. 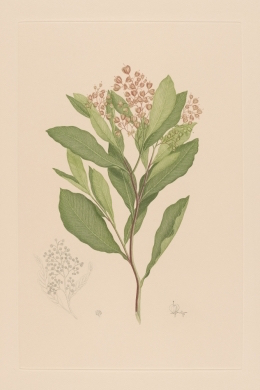 Today, Parkinson’s images are captured in vibrant colored prints based on notes he attached to the sketches. Known as Banks’ Florilegium, the folio art collection was the ambitious vision of Parkinson’s employer, Sir Joseph Banks. A wealthy British botanist, Banks teamed with naturalist Daniel Solander to collect thousands of specimens while sailing with Parkinson and Cook on the HMS Endeavor.

In 2016, Banks’ Florilegium was donated to the UC Santa Barbara Library where it is currently on display along with a rare book donation from the Santa Barbara Botanic Garden. Together they comprise the Special Research Collections exhibition “Botanical Illustrations and Scientific Discovery — Joseph Banks and the Exploration of the South Pacific, 1768-1771.” An opening reception, featuring remarks by paleobotanist Bruce Tiffney and historian Paul Spickard, both of UCSB, will take place Thursday, Oct. 12, at 5 p.m. The event is free and open to the public.

Published in 34 parts in 1990, the set of prints is one of only 100 sets produced by Alecto Historical Editions and the British Museum. On his return to England after the voyage, Banks hired 18 engravers to duplicate Parkinson’s 743 sketches on copper plates, a tremendous 12-year task, with the goal of producing a large illustrated book. But, losing money during European chaos caused by the American Revolution, Banks fell short of his dream. He bequeathed the copper plates — all 18 x 12 inches — to the British Museum.

“A lot of the exhibit talks about Parkinson because he made all of the sketches in the field,” said Danelle Moon, director of Special Research Collections. “The trip went all the way through South America, the Pacific Islands and to eastern Australia — where the British had never been before.”

Complementing the illustrations, UCSB’s Cheadle Center for Biodiversity and Ecological Restoration lent specimens to the exhibit that represent flora collected by Banks and Solander. “I think this is going to be one of our top hits in terms of bringing together the sciences and art,” said Moon.

While Banks focused on identifying new flora and fauna species, Cook’s mission was to observe the 1769 transit of Venus across the sun and map the eastern coastline of Australia. “Cook wasn’t going to hang around and give a botanist several days to explore an area,” said Tiffney, a professor of earth science. “Banks’ team had to snatch what they could and copy quickly.”

In that era, live plants couldn’t survive a long ocean journey because they were exposed to sea salt and variable temperatures. And pressed plants made it back, but in a withered state without their original colors. “Botanist explorers were putting their life on the line,” Tiffney said. “They were sailing in tiny vessels at the mercy of a potentially bad captain who didn’t know what they were doing. Banks was fortunate because he had Cook, one of world’s finest navigators at the time.”

Driven by extraordinary interest in the natural world, botanists risked death and misery to discover new fauna and flora.

In the late 1800s, representatives of the ornamental flora collected by Banks began showing up in Santa Barbara, where the Mediterranean climate is ideal for growing subtropicals and other species, Tiffney said.