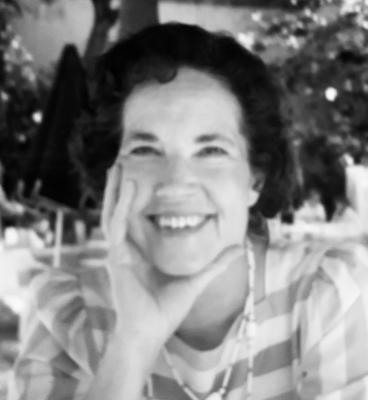 Avonell Ann Jackson was born on August 18, 1929, and passed away peacefully at Sarah House on December 4, 2019. Avonell was raised on a chicken hatchery in Omaha, Nebraska, by her loving parents, Charles and Avonell Otis. One does not usually associate chicken farms with classical music, but Avonell was exceptional, and from the day she was born, she was destined to bring music into this world. An accomplished pianist at a young age, Avonell began teaching piano lessons at the age of sixteen, thus beginning a teaching career that spanned more than 70 years. Avonell also received a Bachelor of Arts degree from the University of Nebraska, in English, not music, because as she always said, “Why should I spend all that time studying music when I already know everything?”

In 1965, Avonell relocated to the Santa Barbara area where she became a beloved and integral member of the Music Teachers’ Association of California, serving as an officer and board member many times throughout her long career. She was the local chairperson for the National Guild of Piano Teachers. Avonell was also active with the Santa Barbara Music Club and often performed in their Noon Musicales. For more than four decades, Avonell championed her love of the music of J. S. Bach by chairing the Southern California Junior Bach Festival, both locally and regionally.  Blessed with a lovely voice, Avonell also sang alto in the choir at First Congregational Church, where she was a long-time member.

Although she excelled at performing, Avonell’s greatest joy was teaching. She was a great friend and mentor to all of her students, many of whom went on to have their own musical careers. She had the ability to know exactly which piece of music to give to a student; what to say to encourage them, and exactly how much to push them so they could reach their full potential. She nurtured and loved her students like they were her own children, and her musical legacy will continue on through all of them.

Almost twenty-five years ago, Avonell married the love of her life, Edward Ogden, who preceded her in death in 2015. Ed and Avonell were well-known at Break Time in Goleta for their billiards skills, and together were members of the Santa Barbara Pool League. Avonell was known to occasionally hustle the unsuspecting pool player, many of whom had no idea that the sweet little old lady with the sparkling blue eyes was actually a bit of a pool shark.

A memorial service will be held at the First Congregational Church of Santa Barbara, 2101 State Street, Santa Barbara, CA 93105 on Saturday, December 21 at 11:00 a.m.

"The sky is falling!"

Thank you for the info. I

I’ll bet the coyote bar and

I'm sure the defense will be

The collision was the end of

Based on the information