The beautiful and awe-inspiring Bunya-Bunya tree is easy to spot around town, because of its massive size and its rounded skyline silhouette.  Prized for its exotic appearance, it was regularly planted in our area, starting in the late 1800’s, on the grounds of ranch houses, grand estates, larger residential homes, and public parks.

If you want to feel what it must have been like to live in the age of the dinosaurs, just stand underneath a Bunya-Bunya and look up.  It fits naturally into a prehistoric Jurassic Park setting, precisely because it is the last remaining species of the Bunya Section of the genus Araucaria.  This was the predominant conifer genus on the single supercontinent, Pangaea, during the Jurassic era - 199.6 to 145.5 million years ago.

Caveat:  Standing under a local Bunya-Bunya during the months of August and September is definitely inadvisable, because ripe seed cones are enormously heavy, will drop off without warning, and land, with great force, on the ground - or on anything or anyone on the ground! 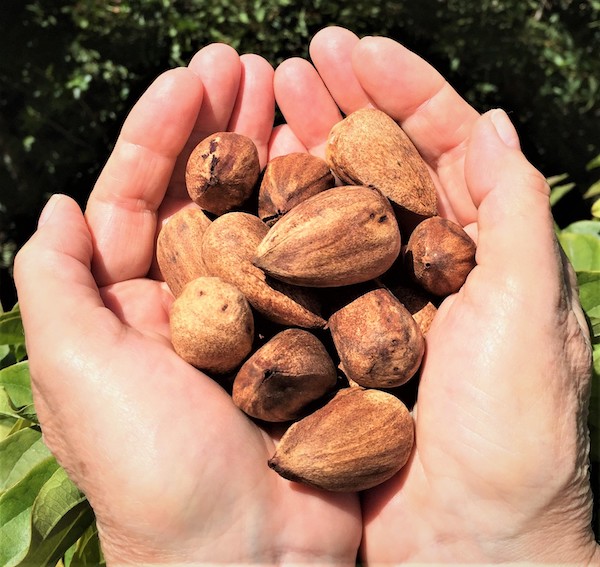 This ancient tree is indigenous to Queensland, Australia, where the once abundant and widespread tree population is now sadly reduced to three protected areas, as the result of timber harvesting, land clearing, droughts, and declining seed dispersal.

Its common name (and the one most-used locally) is “Bunya-Bunya”, the name given in the Australian Aboriginal’s language.  Europeans renamed it “Bunya Pine” - though it is certainly not a pine.  It has also been called, mistakenly, the “Monkey Puzzle Tree”, which is the common name for a distinctly different species of Araucaria (A. Araucana), and so it has been given yet another name, “False Monkey Puzzle Tree”, which is even more confusing.

The botanical name for this tree is Araucaria bidwillii.  The genus name, Araucaria, refers to the Araucani Indians of central Chile.  The specific epithet, bidwillii, honors the English-born botanist and Australian immigrant, John Carne Bidwill (1815-1853).

The Bunya-Bunya is an evergreen coniferous tree, which locally can grow to a height of 120 feet with a branch spread of up to 50 feet.  Its massive trunk can reach a diameter of 60 inches.  Its shape is symmetrically pyramidal when young, growing more rounded and egg-shaped as it matures.  It is the top-of-the-egg domed crown that forms its distinctive canopy. The branches are produced in whorls around the trunk, as on other Araucarias.

One of its more distinctive features is its foliage, which occurs in drooping tufts of branchlets at the ends of extremely long and bare branches.  The leaves differ markedly between the young or juvenile foliage and the mature leaves.  The juvenile leaves are glossy, light green, 1 to 2 inches long with a sharp point, and are arranged in two rows along the branchlets.  Mature leaves are arranged spirally along the branchlets, are deep green, quite stiff, and bear hard points.  On branches with cones, the lance-shaped leaves are variable in length (from 1/3 to 2 inches).  The leaves on old branchlets that turn brown and hard are remarkably sharp - great care should be taken when picking them up. 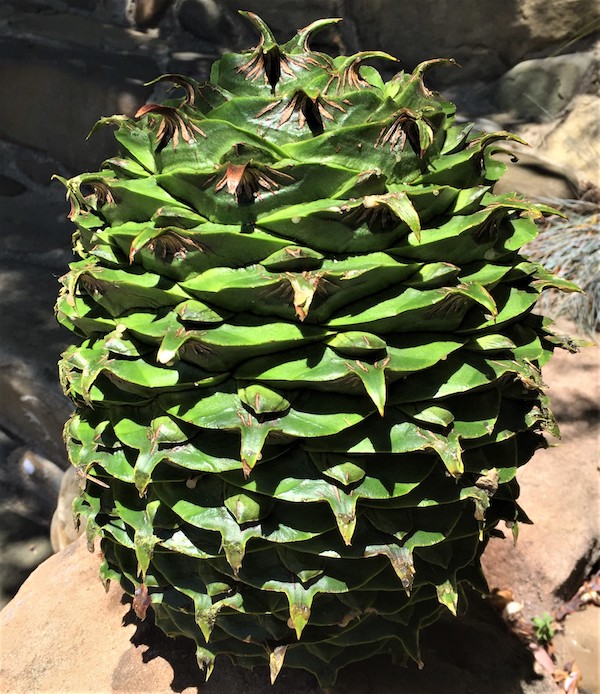 The resinous trunk bark varies in color from dark brown to gray to black.  It is thick (2- to 4-inches) and often exudes a thick cream-colored sap where injured or where limbs break off.  The trunk develops large warts, called “branch collars”, which serve to strongly reinforce the attachment of the heavy branches to the trunk.  Where limbs are closely pruned off at the point of a branch collar, a new branch will sprout from the living tissue exposed at its core.

It takes 14 years for a Bunya-Bunya to begin bearing cones.  It is “monoecious”, meaning it has both male cones and female cones on the same tree.  Male pollen cones are cylindrical, 8-inch long, and appear on the ends of short lateral branches in April.  Female seed cones emerge near the treetop between December and March after pollination, and mature in August and September.

The oval-shaped seed cones can be up to 12 by 9 inches in length and can weigh over 20 pounds, making them a real risk for anyone under or near the trees.  It is wise to have all seed cones pruned off no later than July.

Each seed cone can contain 50 to 100 large (up to 2 ½ inches long) elliptical or globose shaped nuts encased in cone scales bearing sharp points.  The nut, which is covered by a tough protective shell, is edible, quite nutritious, and similar in taste and texture to a chestnut.  When planted, the nut normally germinates within 3 to 6 months (sometimes after several years - waiting until optimum climatic conditions appear) and first forms a long underground tuber from which the above-ground shoot will later sprout.

The Bunya-Bunya plays an important role in the lives of the Aboriginal people of Australia and is considered sacred by them. The nuts were an important source of food and great festivals were held in conjunction with their harvesting that attracted groups in the thousands and could last several months.  Tribes would walk hundreds of miles to participate in these gatherings which centered on the harvesting, eating, and celebrating the Bunya-Bunya nuts.   Today the nuts are still eaten by the indigenous Australians, as well as by newer indigenous food enthusiasts.  The nuts can be eaten raw, roasted, boiled, or ground into a paste for eating directly or baking into a bread.  New recipes utilizing the nut include pancakes, biscuits, artisan breads, casseroles, pesto, and hummus.  The nut flour makes a nutritious gluten-free alternative in baking.

The Bunya-Bunya has been harvested for timber since the arrival of Europeans into Australia, and its wood is still highly prized in the making of acoustic guitars and other stringed instruments for its excellent tone qualities.

The Bunya-Bunya is well adapted to our climate and varied soils; however, it grows best in sandy loam soils with irrigation during the dry season.  Due to its large size at maturity, it is suitable only in larger properties and parks.  It makes an impressive feature in the landscape and is a picturesque skyline tree.  For safety’s sake, all Bunya-Bunyas should be cordoned off during August and September, to avoid injury to persons and property from falling cones.

Mature specimens of Bunya-Bunya can be seen standing on the southwest corner of the County Courthouse grounds, in West Alameda Park, along Alston Road at Woodland Drive, and scattered throughout the Upper East Side neighborhood.

Lousy tree - the “leaves” are like razor blades when they dry out. Thankfully not a native.

Beautiful to look at, though, majestic, with long history, and unusual looking. Santa Barbara's beauty is in part from not-native landscaping.

What? No photo of the tree?

There's a photo at the top, just showing the crown of one. This tree should only be used, as mentioned, in parks (away from paths) or on very large properties, and nowhere people will walk under it. Don't even think about planting one in a normal home garden! There's one at the Courthouse, one in Alameda Park, one on East Valerio dwarfing the house behind it, quite a few in other places around town, and a couple at Lotusland that are over 120 years old. Interesting tree, but definitely not suitable for the typical home garden.

Some friends have two huge Bunya Bunya's
They have to pay tree climbers to cut off the cones before thay can fall every year for safety.
Owning big Bunya Bunya's costs them $1200 a year