The Santa Barbara Police Department is reminding the community to remain vigilant when using automated teller machines (ATM) for account transactions. As released last month, there were nearly a dozen reports from Bank of America customers who have had their accounts compromised and have had unauthorized withdrawals occur. Detectives have recently discovered several more ATM “skimmer devices” on Bank of America ATMs throughout the City of Santa Barbara. It also appears these suspects have been targeting numerous communities up and down the coast of California.

Santa Barbara Police Detectives have continued to receive reports, with fraudulent activity occurring as recently as last week. Over $50,000 of fraudulent withdrawals have been confirmed to this date. The true loss amount is likely to be much larger, considering unreported cases and transactions at other Bank of America locations within the county.

It is believed these suspects purposefully target those customers using California Employment Development Department (EDD) debit cards. These cards generally do not have a EMV security chip. Bank of America manages and maintains accounts for all who use EDD. 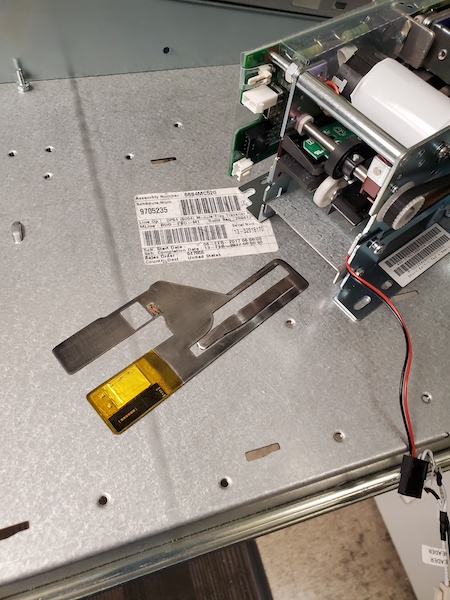 The suspects obtain credit card account information embedded on the magnetic strip by “skimming” the strip on the back of the card when the card is inserted into the ATM. Simultaneously, a hidden camera aimed at the PIN-pad captures the victim entering their security PIN number. The suspects have been retrieving the skimmers within a day or two of installation, then downloading the video and “cloning” the debit card information onto a “blank” debit card. These devices are barely noticeable when using the ATM and are covertly concealed.

The safest alternative is to speak to a bank teller in person or to transfer the funds into an account protected with an EMV-chipped card.  Never use an ATM that appears damaged or altered. It is recommended to conceal the PIN-pad with your other hand or an object when you enter your personal identification number into any ATM.

If you or someone you know has been a victim of these types of ATM thefts, please file a report online https://www.santabarbaraca.gov/gov/depts/police/. Questions may be directed to Detective K. Rapp at 805-897-2331 or KRapp@sbpd.com

It seems amazing that B of A cannot prevent this from happening. Most skimmers I have heard of are on gas pumps well away from the cashier or monitoring devices.

Is it too much to ask B of A to have an employee go out twice a day and check their ATM for a skimmer?

As in the Army..it was a requirement to rove every hour.
At Casa Esperanza shelter, an hourly check..
Everyone gets training re skimmers.

Stealing from the unemployed. That's low.

I was at Bank of America, yesterday, Goleta.
Waited in line 25 minutes, to be told the EDD card I have...their machine inside, not working.
She said the ATM, outside was.
I asked her if it was safe...she just giggled.
Was hacked in June...
Going to take the money out....put in my bank.
This is crazy !

No photos of the bandits? I thought ATMs have cameras

Bank of America will NOT allow EDD customers to withdraw inside the bank...and, sadly, typical of this too big bank, they have been trying to bail from their contract with the state. They could care less if EDD folk are robbed at THEIR ATM. So it seems.

I had a bad experience with B of A in the 70's and swore I'd never do business with thbem again. I'm glad I learned that lesson early as it seems that they still do not care about their customers :-(

How is it that no one has interviewed the bank manager?

It's from a PD press release. Were you expecting award winning journalism?

B of A makes billions in fees from the Federal debit card contract. They already have cameras at the ATM that apparently no one looks at.

If they’re fixin for a big

Henry, yes, the camps have

Vehicle Fire on Garden at Hwy 101

Andrew. Thanks for the info.

Just got word from a friend

Vehicle Fire on Garden at Hwy 101

2 were in fact killed

Survey is flawed. "Other"

This is right by where I work

Four Airplanes Overhead at 11am

CMA's museum has some great

She blew her horn and then

Yeah, most of the time these