On Saturday, January 16, 2021, at approximately 11:40 P.M., the Santa Barbara Police Department responded to a closed business in the 100 Block of Nopalitos Way for an alleged burglary-in-progress.

The suspect, now identified as Santa Barbara resident, Curt Cary Carpenter, age 54, was seen fleeing the property after jumping a fence line. Officers continued to track Carpenter and contained him within the perimeter. 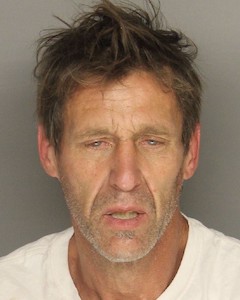 During a K9 search of the area, K9 Kyra located Carpenter hiding inside a vehicle.  After giving multiple commands to exit, he eventually came out and was taken into custody without incident.

During the subsequent investigation, Officers learned that Carpenter was possibly associated with a vehicle parked in a nearby parking lot. During an inventory search, Officers located a loaded 9mm Springfield XD9, high end scoped pellet rifle, cattle prod style taser and a large quantity of methamphetamine.

On Tuesday, January 19, 2021 at approximately 3:40 A.M., Santa Barbara Police Officers were dispatched to a motel in the 2800 Block of State Street, on a report of multiple people causing a disturbance.

When the officers arrived, they contacted an individual at the threshold of a motel room who looked to be in distress. Officers suspected a possible robbery-in-progress by a concealed person within the room. Officers gained entry and ordered all occupants out at gunpoint.

A subject now identified as Curt Carpenter, attempted to further conceal himself and refused to comply with Officer commands. Officers feared Carpenter may have a weapon. Carpenter attempted to shut the door on Officers and was tased. Carpenter fell to the ground and was directed by Officers to comply by crawling out of the room. He was then taken into custody.

Within the room and associated with Carpenter, Officers recovered a loaded Glock style .45 acp handgun, a stun gun bat, a large quantity of methamphetamine, heroin, several other illicit pills and a large sum of cash.

A $1 million-dollar bail increased was approved by a Santa Barbara County Judge.

Vaccinate him, place him in jail isolation until the vaccine takes effect, then let him finish his 40 year sentence. COVID is no excuse to avoid jail.

Ok. My last comment was illegal. How about the death penalty? Is that ok? Not much different than what I said. And people say that all the time. Shees.

death penalty for being an addict? maybe you should move to north Korea with that style of thinking...

What are they doing with all the weapons he had —- and how did he get those weapons?

Career criminals should be treated more severely than others. It's not about rehabilitation, it's about protecting the public, especially if guns and drugs are involved.

Precisely. Rather than increase the number of gun laws that aren't being enforced we need to enforce the gun laws that are already on the books. This character never should have been released to begin with.

People arrested for firearm possession should stay in jail for a long time. I sort of see the argument for letting people go for "victimless" property crimes, but firearm possession in the commission of a crime is a serious offense.

What is a "victimless" property crime?

Can you spell moron?

Right on cue the "conservative" shills are quick to turn a crime into an opportunity to make a point. Without fear and blame they have no point, just noise and conspiracy theories. Trickle down economics: dead, wall paid by Mexico: total joke, drain the swamp: filled with alligators instead. Keep blaming Newsom and the Dems for all your problems, it seems to be working out great!

Released while still high on meth no doubt!

We need to stop this Covid-release thing, particularly for repeat offenders and armed and/or violent offenders. If the letter of the law doesn't deter them, maybe the possibility of dying of Covid in jail may.

Defund the police? This guy's for it I'll tell you that for sure! He's almost halfway there.

Crime will continue to skyrocket until the criminals over law abiding citizens mindset is erased.

Lakergirl: To my knowledge there is no one, no institution, no professional position, no philosophy that places "criminals" over "law abiding citizens" (or non-citizens either for that matter). If you have access to training materials or other statements that demonstrate this concept please share.

Lakergirl - how do you erase a mindset?

The justice system is in disarray, with dangerous felons being routinely released 'no-bail,' only to immediately commit other crimes. Some of this is because of State COVD rules, some due to 'bail reform,' or 'prison reform,' but the net result is dangerous people being set upon society. Cops are hamstrung and frustrated. Citizens need to prod their elected representatives to be more concerned with public safety. Some people are just 'bad to the bone,' and need to be separated from society.

This is like strike #6 for this guy. Last year in Ventura he attempted to flee a CHP vehicle and decided to ram the vehicle.

That’s pretty good humor! Not sure about the timing as this story is about a multiple felon being released and then immediately committing new and additional multiple felonies... but it is pretty good humor! The idiots storming the capital truly are a good target for humor!!! (But again I can’t really get behind this idea of immediately releasing felons committing crimes with guns... it’s keeping our prison population down... but it kind of seems silly and unsustainable... no?)

Did you find any cool souvenirs when you looted the Capitol building?

If you think you've got a

Forgive me if I don’t read

Sure wish they'd set up a

What is the PD or Fire dept

Thank You Rypert.. I know the

clear and present danger has