The sweet perfumed air that has been wafting through Santa Barbara for the last several weeks is scented, in large part, from the “Victorian Box Tree”.  When one is in full bloom, it exudes a strongly heady fragrance, a blend of orange and jasmine, that is almost overwhelming!

Bell-shaped, cream-white flowers, ½ inch long, appear in 3-inch clusters at the ends of branches, all over the canopy, and bloom in profusion from late February through April.  Their copious nectar attracts great numbers of bees and, often, Anna’s Hummingbirds.

After pollination, orange-colored roundish fruit capsules (berries), ½ inch in diameter, appear in the fall.  In the winter when the fruits mature, each capsule breaks open to expose 20-30 angular seeds, 1/8 inch-long, which are smooth, reddish-brown, and remarkably sticky. 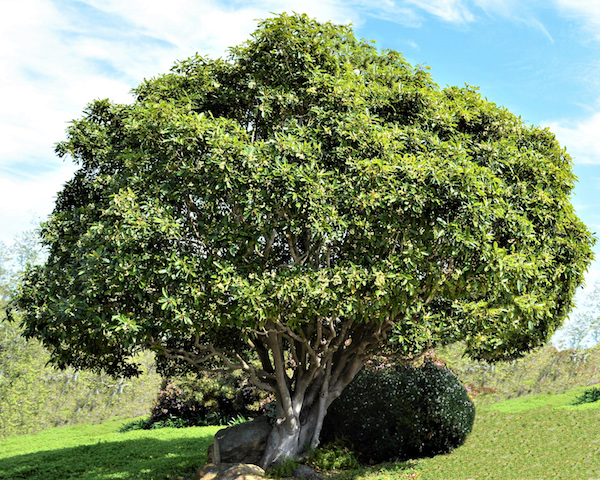 These tasty seeds draw in birds (particularly warblers and mockingbirds) which swallow and, eventually, spread them abroad - complete with a good dose of guano as fertilizer.  Consequently, baby trees may appear seemingly everywhere in the garden!  Victorian Box was considered for addition to the invasive plant list in California in 2013 but was not included, because the impact risk was deemed too low.  Fallen flowers and sticky resin-coated seeds are produced in such great numbers that they can be a temporary maintenance problem on walkways and patios.

Distinctive and appealing characteristics of the Victorian Box include its evergreen, glossy, dark-green leaves, 3 to 6-inch long, which have uniquely wavy edges, and its mottled gray bark that forms scales with age.  It is fire-resistant and, therefore, good for defensible space.

When left to form into a tree in ideal growing conditions, a Victorian Box can grow to over 50 feet tall with a dense, rounded, umbrella-shaped crown in a spread of 40 feet.  However, this versatile plant is more frequently pruned from its start to become an attractive and functional evergreen shrub, screen, windbreak, or hedge - it is commonly used for this purpose in Montecito’s “Hedgerow District”.

Victorian Box is native to the east coast of Australia, appearing as an understory plant in Eucalyptus forests from south-east Queensland to eastern Victoria.  Having been quite popular for a long time as an ornamental tree, it has been carried to many of the tropical and subtropical regions of the world.

Considering its moist tropical origins, it is surprisingly tolerant of drought, fog, and gusty or cold winds.  Unfortunately, after 7 years of our drought, many local Victorian Box Trees have begun to show signs of severe dehydration stress and, in some cases, have died.  Since they are susceptible to “oak root fungus” (which is common in Santa Barbara County soils), they can also die, ironically, from overirrigation or too much rain.

Its botanical name is Pittosporum undulatum.  Pittosporum is a combination of the Greek words “pitta”, meaning pitch, and “sporum” meaning seed, referring to the resinous coating on the seeds.  The specific epithet, undulatum, is from the Latin word “unda”, meaning wave or surge, referring to the wavy (undulating) leaf margins.  Its other common names are “Australian Cheesewood”, “Sweet Pittosporum” and” Mock Orange”.

Victorian Box Tree should be planted in sun to partial shade. Since it is naturally an understory plant, it can do well under larger trees.  While drought-tolerant when established, it does better with deep watering during dry periods.  It does well in all types of soil, but always requires good drainage.  Aphids are the only insect pest that seems to bother it - aphids can be easily controlled by occasionally spraying the tree with water or with organic pesticides.

There are many fine examples of Victorian Box Trees in Santa Barbara: as street trees, they are found on Micheltorena Street (from Chapala to the freeway), on East Micheltorena Street, on East Sola Street, on East Victoria Street, and on the 400 Block of East Figueroa Street; and, as park trees, they have been planted in Orpet Park and in West Alameda Park.  Of course, there are innumerable Victorian Box hedges bordering private residences - and perfuming our yards these evenings.

Sounds like an especially beautiful plant. Thanks for always giving locations where the trees you choose to inform us about are, nice to be able to check them out.

There is a huge pittosporum between my house and driveway. It was planted as a near-seedling by the young son of the former resident some 50 years ago, and is now gigantic. I love when it is in bloom, because hundreds and hundreds of bees spend days at a time gathering nectar or whatever it is that bees do. I like to stand under the tree, because the air almost literally vibrates with their buzzing. Never once have I been stung, even though I'm right in the middle of the bees' work area. I guess they figure that if I don't mess with them, they won't mess with me.

The bees won't bother you. At the height of the drought the bees, here, were swarming the hummingbird feeders in giant, dripping clumps. I took to giving them their own saucer, which they would polish off in an hour or so. Unfortunately, I had placed the saucer on the railing under the hummingbird feeders by the front door, so when the saucers were empty, they would come into the house to let me know it was empty. (They had water, but nothing was in bloom.) It became a problem, with 20 or so bees in the house looking for a refill. I moved the saucer to the other side of the yard, hundreds of feet away, and still when it was empty, they would come find me.... Never stung me and I never felt threatened.

I am very thankful for this write up on the Victorian Box Tree. We have what I always knew as a "Mock Orange" near our house and have always cherished its blooms. Another joy of Spring!