The Alzheimer’s Women’s Initiative, Ventura County, led by Chair Amy Commans of the Alzheimer’s Association, California Central Coast Chapter, presented the Second Annual ‘Your Brain Matters’ Luncheon at the Four Seasons Hotel Westlake Village on Friday, May 10, 2019. The event focused on the importance of brain health and honored caregivers who care for individuals living with Alzheimer’s disease or related dementias. This year’s recipient of the Alzheimer’s Leadership Award was Leeza Gibbons, talk show host and Alzheimer’s Champion, who was also the keynote speaker. Dr. Rebecca Edelmayer, Director of Scientific Engagement for the Alzheimer’s Association was a fantastic Scientific Speaker. The brilliant women professionals who spoke at this luncheon are living examples of the Alzheimer's slogan “The Brains Behind Saving Yours.” It was shocking to hear that Alzheimer's is the 6th major cause of death in the U.S. and the 3rd in the State of California. 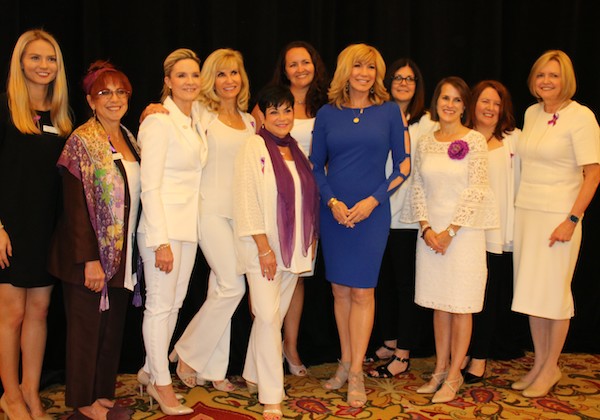 Leeza Gibbons talk about her mother's battle with Alzheimer's was very touching, but the powerful facts on how “Alzheimer's affects twice as many women as breast Cancer today and how the numbers keep rising in this healthcare crisis worldwide and the end of Alzheimer's starts with you” was a home-run for all the women in this room. “This is a terrible, polarizing illness that destroys the brain killing nerve cells and tissue, it 'Eats Your Brain' and takes the patient's whole family down as well,” she said. Prior to introducing Doug Yarrow 2019 Caregiver's Award recipient, Gibbons said “Caregivers are the headliners in this picture. Theresa Valco and Rebecca Edelmayer, Ph.D. joined Leeza in a panel discussion on Alzheimer's and work being done to combat it and educate the public on diagnosing Alzheimer's. The National aggressive plan of action is to effect a cure by 2025 by doing the research to find biological factors and causes, by staving off symptoms through style interventions, medications, and fight, and know that I'ts game on! 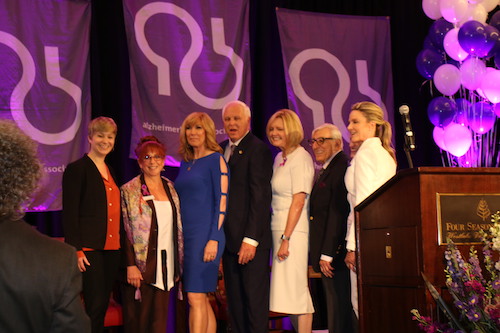 Comedian James Farr of “Mash” fame filled in for Bob Eubanks and shared some wonderful memories of his time with his mother. 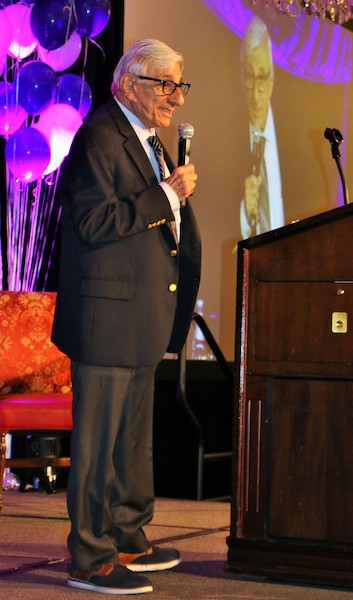 2019 Caregiver Award Recipient Doug Yarrow gave a beautiful sharing with video of his life, hope and dreams with his wife, and how it all changed with the Alzheimer's diagnosis. Those of us who have lost friends or family to this disease know how painful it is to love someone who no longer knows who you are. Doug's story was very touching and his continued hope for a cure was so inspiring.

The luncheon featured extraordinary raffle prizes (view and pre-purchase raffle tickets online at act.alz.org/awivta that began on April 1), The ballroom lobby was alive with guests bidding on lovely items. “Memories in the Making” art created by Alzheimer’s and dementia patients was available for donation, Alzheimer’s education, and limited edition amethyst bracelets created by local artist Leslie Schneiderman were also available. Some amazing items in the live auction included a week at a luxury beach home on Silver Strand Beach a week at cozy Mammoth home. 3-night stay at Rancho La Puerta Wellness Resort & Spa, and an overnight stay for 2 at Rosewood Miramar Beach Montecito.

Bravo to the Alzheimer's Association California Central Coast Chapter, the board of directors, staff from Ventura, Santa Barbara and San Luis Obispo as well as the “Angels in White” and all the generous sponsors who made this afternoon possible. Special thanks to Four Seasons Hotel Westlake Executive Chef Jose Fernandez and Executive Pastry Chef Patrick Fahy who prepared a luncheon using “The MIND Diet” ingredients to present a magnificent Wellness Salad of fish and greens with avocado and a lavender sorbet dessert with a chocolate walnut cookie, all paired with Juffers and La Crema wines.

About the Alzheimer’s Women’s Initiative

Inspired and influenced by “The Shriver Report: A Woman’s Nation Takes on Alzheimer’s,” a group of key women leaders and visionaries came together to use their amazing brains to help wipe out Alzheimer’s disease. With women at the epicenter of the Alzheimer’s crisis, these women were charged, inspired, and moved to form the Alzheimer’s Women Initiative (AWI), a volunteer-driven community group, which aims to educate families, associates and neighbors on the economic and human impact of Alzheimer’s, honor those who selflessly provide care for people affected by Alzheimer’s, expand the resources available to the local families who are living with Alzheimer’s each and every day, and advocate for more federal research dollars to find a way to prevent or cure Alzheimer’s disease.

About the Alzheimer’s Association

OP: The word is "contaminant

That article is nice, but is

An excellent article on

Don't feel too chagrinned at