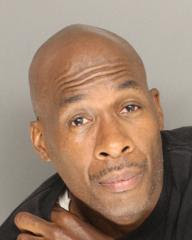 At approximately 3:00 a.m. this morning, Sheriff’s deputies responded to the 500-Block of Union Ave in Orcutt regarding a male subject who was peeking into a window. The victim, who was monitoring the suspect via surveillance cameras, observed the suspect enter her backyard and peer into her window. The victim called 9-1-1 and deputies responded to the scene.

When deputies arrived on scene, the suspect, identified as 50-year-old Raymond Kelly of Santa Maria, attempted to flee. After a short pursuit the suspect was taken into custody and arrested for the violations of PC 647(i) - Peeping, and PC 148(a)(1) - Resisting a Peace Officer.

A follow up investigation revealed that Kelly had a history of unwanted contact with the victim going back over a year. Due to this behavior, Kelly was arrested for the additional violation of PC 646.9 - Stalking. He is being held at the Santa Barbara County Jail on $150,000 bail.

Further investigation indicated that there may be more victims. Anyone with information regarding Kelly is asked to contact the Santa Barbara County Sheriff's at 805-681-4171 or go to our website at https://www.sbsheriff.org/home/anonymous-tip/.

Toggle Comments (Show)
Alleged Stalking Suspect Arrested in Santa Maria
Part of the problem is mind-set. Many males think that they have a <right> to women and women have no right to turn them down and tell them to go away. If our culture changed to one that threw out gender as a condition of autonomy, personal independence, those annoying, controlling and dangerous behaviors would change. Male expectations would be more rational. Mental, emotional, and physical differences between genders are real, but sexual impulses need not be acted upon. In the absence of brain damage, that's a choice.
Alleged Stalking Suspect Arrested in Santa Maria
I think it must be really scary to have a stalker. Glad he was caught and the woman is okay.
Please Login or Register to comment on this.

Question. Is this the first