The Santa Barbara County Sheriff’s Office, in consultation with fire agencies and other public safety officials, has announced that effective at 9 a.m. today, March 2, Mandatory Evacuation Orders are lifted for all areas.

Preliminary reports indicate that the storm caused minor damage in the area. No damages
were sustained to utility infrastructure.

“Together we made it through the first winter storm since the 1/9 Debris Flow. On behalf of all public safety and emergency officials, we want to thank you for staying informed, being prepared and following the evacuation orders issued yesterday. We know that being evacuated is a tremendous hardship and we did not make this decision lightly. Because of your cooperation we were able to get through this together,” said Santa Barbara County Sheriff Bill Brown.

Tom Fayram, Deputy Director of the Santa Barbara County Flood Control District, added “The catch basins were effective. The creek channels, roads were able to handle the rain and
debris.”

If evacuated residents who are returning to their residences have a need for wheelchair or other specialized transport needs, call Easy Lift at 805-681-1180.

The Santa Barbara County Sheriff’s Office, in consultation with other public safety officials, has issued a Mandatory Evacuation Order effective today (Thursday, March 1) at noon for individuals near the Thomas, Sherpa and Whittier fire burn areas throughout Santa Barbara south coast (in Goleta, Santa Barbara, Montecito, Summerland and Carpinteria) due to an approaching winter storm. Individuals must be out of the evacuation area by 6 p.m. today (Thursday, March 1).

The National Weather Service indicates that there is a potential for rainfall to exceed the 0.5 inch per hour threshold. Officials hope to return individuals to their homes as soon as it is safe to do so. To determine if a residence or business is in the evacuation area, consult the evacuation boundaries map at ReadySBC.org.

The potential for debris flows being triggered is low to moderate. Waterway flows may be rapid and blockage and overtopping in waterways is expected. Roads may be flooded and impassable. People close to and immediately downstream of choke points may be endangered. It is important that community members understand the seriousness of the situation and follow the direction of authorities.

According to Santa Barbara County Sheriff Bill Brown, “The decision to evacuate these areas is being made out of an abundance of caution. Due to the size and breadth of the evacuation area, not all residents will be contacted in person. Do not wait for deputies or someone else to come to your home or business. Everyone should begin the evacuation process now. Community members should check with their neighbors to see if they need help to evacuate.”

The California Highway Patrol, the National Weather Service and public safety partners will monitor storm activity to ensure Highway 101 remains open to facilitate resident evacuations. If Highway 101 needs to be closed, CHP would do so just prior to the arrival of the intense portion of the storm. Bands of rain, timing and intensity will guide this decision. Closure information will be communicated broadly to the public as decisions are made.

Community members should go to ReadySBC.org for up-to-date information on evacuations and road closures.

No Changes in Evacuation Level for South Santa Barbara County This Evening, Feb. 28

The Recommended Evacuation Warning remains in place for the Thomas, Whittier and Sherpa Fire burn areas along the Santa Barbara County south coast (in Goleta, Santa Barbara, Montecito, Summerland and Carpinteria). A Flash Flood Watch has been issued for these areas beginning at 9 p.m. tomorrow, Thursday, March 1 to 9 a.m. Friday, March 2.

The current forecast from the National Weather Service indicates that the heaviest rainfall is now predicted to arrive around midnight Thursday and will continue for a 6-hour period into Friday. Total expected rainfall for this storm is 1 inch for the coastal areas and 1.5 to 3 inches for the foothills and mountains. Rain intensities are predicted to be between 0.33 inches and 0.5 inches per hour. The threshold for a debris flow is 0.5 inches per hour or greater. Therefore, no Mandatory Evacuation Order is being issued tonight (Wednesday Feb. 28, 2018).

Public safety officials are continuously evaluating weather predictions and may issue a Mandatory Evacuation Order tomorrow morning (Thursday, March 1) if warranted.  At rainfall rates of 0.33 to 0.5 inches per hour, people near streams and channels could be threatened by debris flows.

According to the Santa Barbara Sheriff’s Office, “If at any time people feel threatened, take immediate action. Do not wait for a notification. Those with access and functional needs and those with large animals should leave during this Recommended Evacuation Warning period.”

School districts will contact families through their established communication channels regarding any possible school closures.

Community members are encouraged to go to ReadySBC.org for up-to-date information on evacuations and road closures.

An evacuation boundaries map is now available at ReadySBC.org which shows communities near or below the Thomas, Sherpa and Whittier Fire burn areas that are under the Recommended Evacuation Warning currently in effect. This map will be updated to reflect any changes to evacuations.

The Santa Barbara County Sheriff’s Office, in consultation with other public safety officials, has elevated the current Pre-Evacuation Advisory to a Recommended Evacuation Warning for the Thomas, Sherpa and Whittier burn areas (in Goleta, Santa Barbara, Montecito, Summerland and Carpinteria) due to an approaching winter storm. This Recommended Evacuation Warning becomes effective at 8 a.m. tomorrow Wednesday, Feb. 28.

The National Weather Service predicts that a storm arriving Thursday night and continuing through Friday will have rainfall in the range of 1/3 to 2/3 of an inch per hour. NWS informed the County that moderate to heavy rainfall rates early Friday may be enough to generate isolated mud and debris flows near burn areas. The communities near and below the Thomas, Sherpa, and Whittier burn areas are strongly recommended to relocate to safer locations for their own safety. High risk for loss of life and property exists. 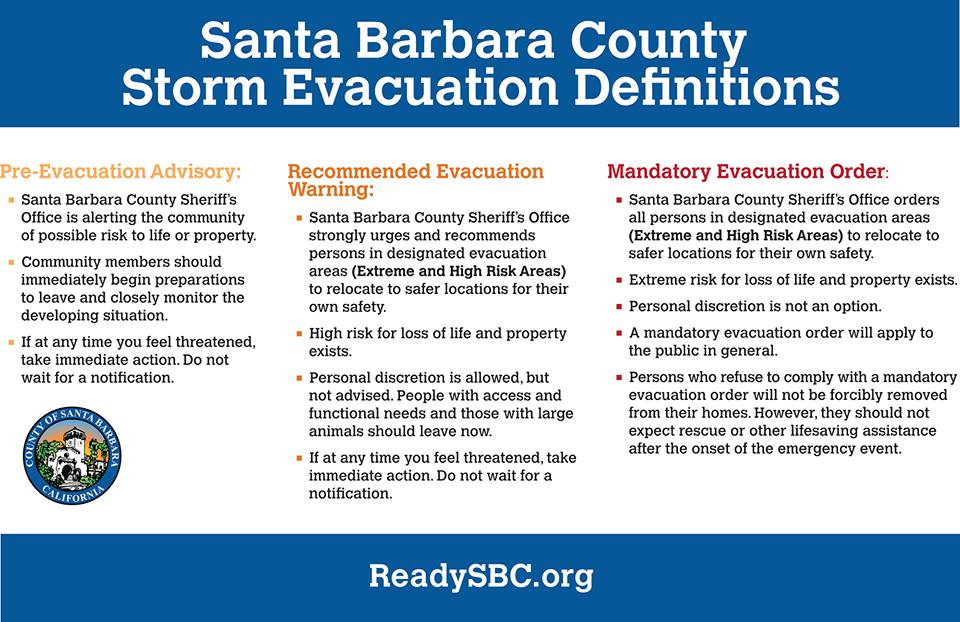 According to the Santa Barbara Sheriff’s Office, “If at any time people feel threatened, take immediate action. Do not wait for a notification. Those with access and functional needs and those with large animals should leave.”

Additional evacuation information will be provided by 6 p.m. Wednesday, Feb. 28. If a Mandatory Evacuation Order is issued, all persons must be out of the designated areas by Thursday, March 1 at 9 a.m.

The location for evacuation centers and animal shelters will be announced Wednesday, Feb. 28. Schools will remain open on Wednesday. School districts will contact individuals through their established communication channels regarding school closures.

To determine if you are located near or below one of the burn areas, access the interactive map at ReadySBC.org. 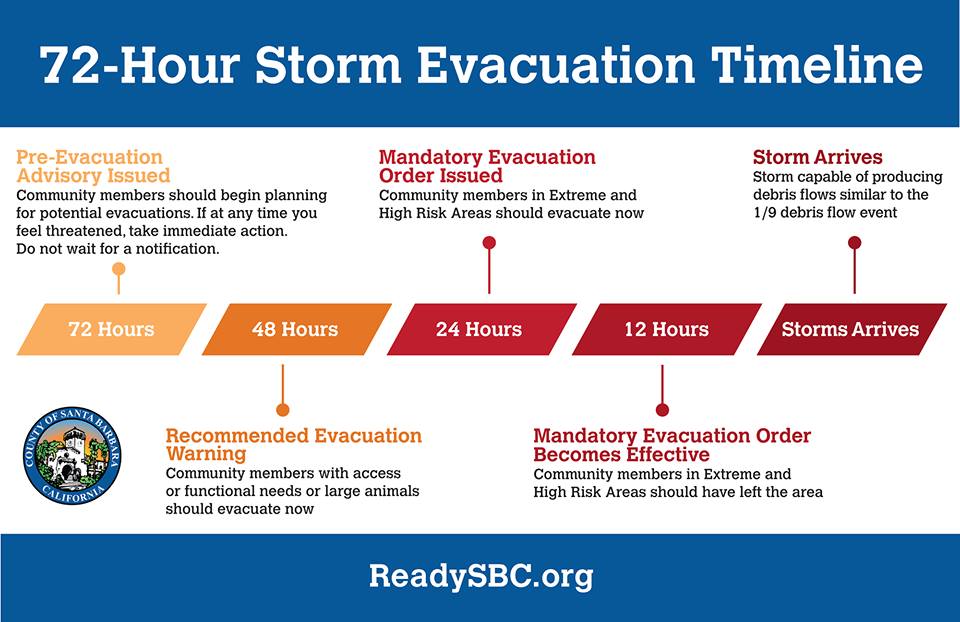 Update by the County of Santa Barbara
February 26, 2018

PRE-EVACUATION ADVISORY TO REMAIN IN EFFECT FOR SANTA BARBARA COUNTY.

Public Asked to Remain Vigilant of Storm System Arriving Thursday Afternoon. The Pre-Evacuation Advisory issued by County officials for the Sherpa, Whittier, Alamo and Thomas Fire burn areas remains in effect. No evacuations are being ordered for the Monday/Tuesday storm. However, thunderstorms can appear with little to no warning and can cause debris flows.

The Pre-Evacuation Advisory will remain in effect as the prediction for the storm on Thursday may meet evacuation thresholds. The public must remain vigilant as flash floods, mud and debris flows can happen with little or no warning. County agencies, emergency officials and NWS will continue to monitor the situation and provide updates as needed.

Unstable Storm Expected in the Area Monday Night Through Tuesday Morning: A Pre-Evacuation Advisory has been issued for the Sherpa, Whittier, Thomas and Alamo Fire burn areas due to an approaching winter storm.

The National Weather Service forecast indicates that a storm will be arriving Monday, February 26 late in the afternoon and will continue into Tuesday, February 27. Generally, rainfall amounts will be less than 0.33 inches. However, because of the instability associated with this storm the predications currently show a possibility of isolated rain totals in some areas of between 0.50 and 1 inch where thunderstorms develop. These amounts are capable of producing minor debris flows and flooding below the Sherpa, Whittier, Thomas and Alamo Fire burn areas.

The County, emergency officials and the National Weather Service are closely monitoring the situation and will alert the public with more information as the storm approaches. Impact areas need to prepare for the possibility of an evacuation for Monday evening.

If at any time during this storm, or any storm, anyone feels threatened, action should be taken to leave for high ground or a safe area. Do not wait for a notification. If an individual or family has access or functional needs, or has large animals to move, consider leaving well in advance. For more information on the risk please go to ReadySBC.org. To go directly to the Interactive Debris Flow Risk Areas map, visit ReadySBC.org/StormReadyMap. Please also standby for future updates.