A portion of Alameda Padre Serra was closed on February 3, after a sinkhole on the westbound lane appeared. A clogged culvert had led to pavement erosion. In an emergency repair, crews excavated the road, unplugged and replaced the culvert, and repaved the surface. The road reopened on February 22. 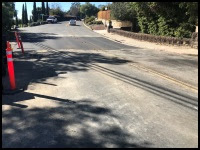 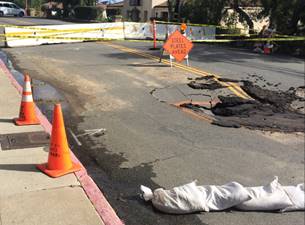 City engineers and maintenance staff are working to determine a repair and will reopen the road as soon as possible.

Drivers are encouraged to avoid the area. The safest and most efficient way to bypass the area is on Highway 192 or on streets closer to downtown Santa Barbara.

I hope the APS residents enjoy the peace and quiet of little to no traffic.

As of Tuesday the two roadblocks on APS were @ Moreno and Dover. The detour takes you along Dover/Paterna/Lasuen. Haven't checked this morning yet.

Road blocks are still there.

Hurray, APS is my main thoroughfare across town instead of 101.

See, you should be happy that

Covid is not the only public

Keep a baseball bat near your

The fallacy with your

A student mandate is needed.

SBO - what about charging