The Oscar-nominated actor was recognized for his critically acclaimed work in Noah Baumbach’s Marriage Story. Johansson was scheduled to appear alongside Driver for her in Marriage Story as well but she cancelled due to illness.

As Driver arrived at the Arlington Theatre, he was greeted by SBIFF Executive Director Roger Durling, who later presented him with the award. After taking a few questions from young aspiring student journalists on the red carpet, Driver sat down with IndieWire’s Anne Thompson for an insightful conversation and look back at his varied career and beginnings as a U.S. Marine.

“It’s the best acting training...the structure is exactly the same. I mean, the end result is much different, and in one you’re pretending the stakes are life and death, in the other they actually are,” Driver said of his time in the service. 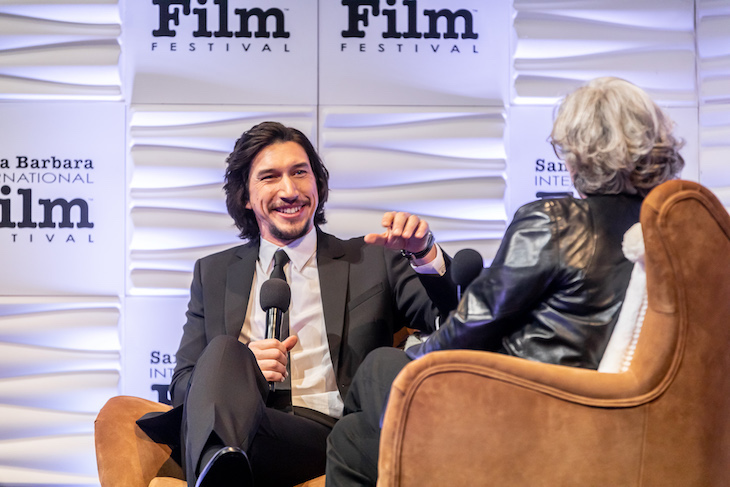 Marriage Story, written and directed by Noah Baumbach, follows the life of a stage director named Charlie and his actor wife as they struggle through a grueling, coast-to-coast divorce that pushes them to their personal and creative extremes.

”We were supported by a very clear backbone of what we were doing. It was very carefully choreographed. We worked on it very similar to a play...because it was so well-written, blocking came really fast...When we were shooting it, it didn’t feel very dissimilar to what it’s like when you shoot a love scene with everyone naked. Our boom operator is holding the mic, but he’s kind of looking away. There’s such focus given to what we’re doing, and there’s not a lot of conversation in between...there’s two people trying to be as naked as possible,” said Driver about the dramatic fight scene with Johansson.

Following Driver’s conversation with Thompson, Durling took the stage to present him with the Outstanding Performer of the Year Award, saying: “Adam Driver, in my humble opinion, your acting as Charlie is the best performance by a male in 2019 by far. You bare your soul in this film. You do not rely on makeup. You don’t rely on wardrobe, nor dramatic weight changes. Instead, you wear your emotions on your skin and dig deep.”

Upon accepting his award with a standing ovation from the audience, Driver said: “Acting to me is many things. You know, it’s a craft. It’s a political act. Unfortunately, it’s a business, and it’s a service. I think that acting is a service industry. I’m there in service of the director, the actors and the crew, and the story overall, which is more important. I very much believe in that. I believe in the potential effect of great collaboration. I think movies and films and art can lead people out of the dark.” 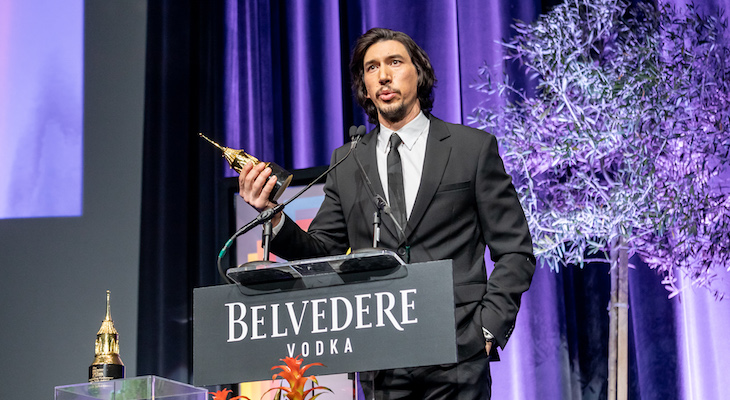 Marriage Story was so, so. It’s a bit cliché, as it’s been done before (see Kramer vs. Kramer). The acting was good, but so what when it’s nothing new. Lots of hype about average films these days, as these slow burn films are pushed and dominate the award season year after year. I’m sure that because this story revolves around the film/theater industry it will get serious consideration, much like the snoozer ‘Birdman’. But most people won’t care much. On the other hand, I saw 1917 and that was moving, exciting, and a technical masterpiece.

I liked 1917 a lot, but at times I thought I was rewatching Gallipoli (the Mel Gibson Gallipoli).

Marriage Story isn't for everyone. I much preferred Driver in "Paterson," although that movie might be too subtle for some as well. And too bad Johansson didn't make it to Santa Barbara. I bet a lot of people were sorely disappointed.

As the 49ers/Packers game was looking like a rout, I was channel-surfing and caught a glimpse of ScarJo at the SAG Awards telecast. She looked radiant - glad to see she made a miraculous recovery since yesterday's missed appearance here.

He is just magnificent in "Marriage Story".

Maybe we should make people

How is it insane? It

This is utterly false. Yang