Twenty-one years ago, on September 11, 2001, the United States was attacked when terrorists crashed planes into the World Trade Center in New York City, the Pentagon in Washington DC, and another in a Pennsylvania field. We will never forget the terrible tragedy that occurred that day.

On September 11th, the Santa Barbara County Fire Department will be observing a moment of silence, followed by the lowering of the flag, at 9:00 a.m. at each of our fire stations to honor the first responders and the nearly 3,000 lives lost on 9/11, along with our military members who have perished fighting the terrorism behind the attacks. The public is invited to attend this brief ceremony at any of the Santa Barbara County fire stations.

The Santa Barbara County Fire Department would like to welcome your attendance at either event.

Members of the public are invited to attend a special ceremony commemorating the 21st anniversary of 9/11. The event will be held on Sunday, September 11, 2022, at 9:00 a.m. at the Santa Barbara Courthouse Sunken Gardens. Undersheriff Bonner, along with the Sheriff’s Office Honor Guard, will join local dignitaries and representatives from area fire departments and other agencies for the second annual 9/11 Flag of Honor Across America Memorial. The Council on Alcoholism and Drug Abuse (CADA) Teen Court program was selected as 1 of 60 participants across America to lead this National 9/11 Day Remembrance Project.

Ceremonies in the selected 60 communities will join together to never forget the 2,983 women, men, and children who lost their lives on September 11, 2001, and in the February 26, 1993 World Trade Center Bombing. Each of the 60 inaugural communities will remember 50 of the souls lost by reading their names and short biographical information for each.

During this ceremony, members of the CADA Teen Court program will present the County with the official 9/11 Flag of Honor, which includes the names of all victims who lost their lives on these two tragic days. Each of the 9/11 flags were previously flown at the 9/11 Memorial and Museum, which is located on the sacred ground where the Twin Towers once stood.

Anyone wishing to attend this local event is encouraged to bring a folding chair or blanket, as seating will be extremely limited. For media inquiry about this event on a nation-wide level, see below for contact information. 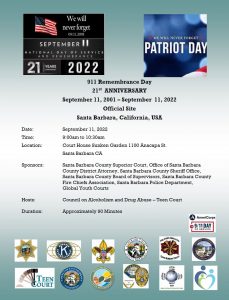 If you know how to play taps please join us at these times, doesn’t matter where you are. #never forget

Thank you Edhat for this notice.
Thank you all firefighters and emergency responders.
Thank you Ontare neighborhood station.

Will there be a ceremony at County Fire Headquarters on Cathedral Oaks?