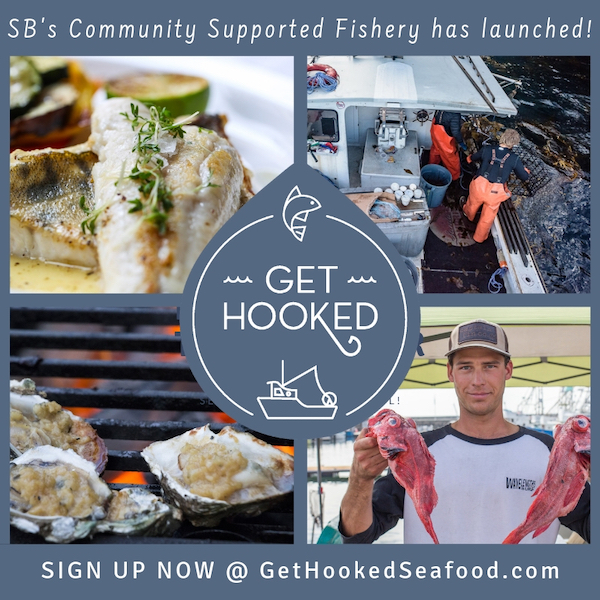 Get Hooked, a new Community Supported Fishery program, aims to connect local fishermen directly to seafood lovers and fresh-food enthusiasts in the Santa Barbara area. The seafood program is modeled after community-supported agricultural programs, commonly known as CSAs, which have proven to be a successful model for conscious consumers seeking fresh, local and healthy food. The program provides a win-win for both fishermen and fish-loving residents.

“Santa Barbara has a fishing heritage that is an integral part of the community’s identity,” says Get Hooked founder Kim Selkoe, a marine ecologist at the National Center for Ecological Analysis and Synthesis at UCSB. “Our CSF is about our local fishermen getting credit for the regulations that they adhere to, giving them a leg up on imported seafood products that may be cheaper and easier to find in the marketplace. It's not uncommon for imported seafood to be illegally caught, improperly labeled and potentially contaminated.” More than 80% of the seafood consumed in the US is imported. The CSF model creates a trustworthy source of sustainable seafood that can otherwise be hard to find, and educates consumers about the diversity of tasty fish and shellfish to be had from our own waters. About 55% of all seafood consumed by Americans in 2015 was limited to three types of seafood: shrimp, canned tuna and salmon. With a Community Supported Fishery program, consumers are invited to expand their palate with access to tens of species.

Members of Get Hooked receive the “catch of the day” from a different local fisherman each week, with common possibilities being black cod, white sea bass, salmon, halibut, spot prawns, lingcod, ridgeback shrimp, rockfish, sand dabs, rock crab, mussels, and oysters, all harvested in the Santa Barbara Channel or nearby ports. Customers pick up their seafood shares weekly or biweekly from partnering host locations scattered across the Santa Barbara area, such as produce markets and breweries. This model is designed for consumer ease and access. It also creates a strong social fabric of local businesses who stand behind Santa Barbara’s fishing industry. Members receive a weekly newsletter that highlights easy and delicious seafood recipes, cooking videos, fun facts on the species of the week and a bio on the fisherman who caught their dinner.

Get Hooked launched in September 2018 with grant funding from the USDA Local Food Promotion Program. They have their sights set on expansion to the Santa Ynez Valley, Ventura and northern Los Angeles. Plans to incorporate a program called Bay2Tray are in the works. Bay2Tray was created by Real Good Fish, a CSF operating in Monterey, to help school districts source nutritious local seafood for school cafeterias. Their Grenadier fish tacos are a hit with the kids; the dish has some of the lowest food wastage rates of the cafeteria offerings.