SANTA BARBARA, California – For more than 40 years, attorney Frederick “Rick” Montgomery has been a fixture in Santa Barbara legal circles. As co-founder in January of 1977 of one of the city’s most esteemed law firms, Fell, Marking, Abkin, Montgomery, Granet & Raney, LLP, he has helped generations of Santa Barbara families and businesses work through their legal challenges.

This month, the preeminent local attorney launched a new chapter in his career. On March 1, he opened a new practice in downtown Santa Barbara across the street from his old firm.

The move follows the natural winding down of Fell, Marking, Abkin, Montgomery, Granet & Raney as attorneys from the decades-old partnership retired or moved on to other ventures. For Montgomery, giving up the profession he loves simply wasn’t an option. His new practice continues his specialization in complex family law and is located at 926 Garden Street.

“I’m not ready to give up the tussle. I love what I do,” said Montgomery. “This is an exciting new chapter in my professional career. It’s invigorating, it’s a brand new set of challenges, and challenges make my world go round.”

Montgomery has a lifetime of experience in civil litigation, including real estate, commercial and business transactions, intellectual property, probate, estates and construction. However, for the past 20 years or more, he’s focused on family law involving complex marital dissolutions involving assessing, valuation, apportionment and division and allocation of businesses and personal assets, as well as the parties’ associated spousal and child support issues. Resolving the complexities of the parties’ needs for both Premarital and Post-Marital agreements is also a focus of his practice. He’s worked on hundreds of cases, many involving high net-worth individuals such as sports figures, celebrities, business leaders, and prominent families.

No matter their backgrounds, Montgomery strives to sensitively, discreetly and confidentially guide his clients through the legal, financial and emotional complexities of their respective cases to reach the best possible solution for them, their children , and where necessary, their children’s children. His priority is always to negotiate a settlement that’s satisfactory to all parties involved. When that isn’t possible, however, he has decades of complex trial experience to seek ultimate resolution before a judge.

“It is challenging and rewarding because if I do my job property, I’m actually, in my view, doing a great service to those people who are in the greatest need of dispute resolution,” he said. “The greatest goal for me in these difficult situations is to find a solution which is fair and just for both of the parties, a resolution which each of them can either be happy with or at least live with, and which creates the least amount of strife and estrangement, not only between the parties, but also their children.”

While centered in Santa Barbara, Montgomery works with clients from all over California and across the country. He is licensed to practice law in state and federal courts, both trial and appellate. For decades, has held an AV-preeminent rating with LexisNexis® Martindale-Hubbell®, meaning he’s deemed by his peers to have demonstrated the highest level of ethical standards and legal ability in his field.

A practicing attorney since 1971, Montgomery received his undergraduate degree in political science from Stanford University in 1967, and his law degree from the University of California, Hastings College of Law in 1970. At Hastings, Montgomery was a member of the staff and, thereafter, managing editor of the Hastings Law Journal. He graduated as a member of the Order of the Coif (top 10%) and Thurston Society (top 5%).

Montgomery co-founded Fell, Marking, Abkin, Montgomery, Granet & Raney in 1977, and the firm became one of the most highly regarded, full-service law firms in Santa Barbara. Montgomery is a member of the State Bar of California and the Santa Barbara County Bar Association. When not practicing law, he enjoys snow skiing, and spending time with his family. He and his wife, Sherri, have been married for 53 years. They have three adult children and five grandchildren, all living in Santa Barbara. 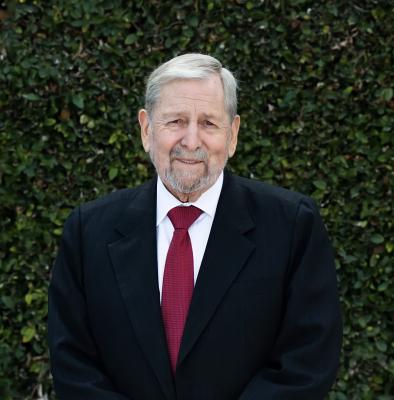 There needs to be more focus

One of the people pictured

"Just a bit of trouble"

With all the dark money now

I suggest those who are

Crime in the county has not

Dr. Ansorg said that this

Does this cancellation only