Lights Up! Debuts Big Fish The Musical at The Marjorie Luke Theatre

Big Fish: The Musical plays at the Marjorie Luke Theatre on Friday, April 26th at 7pm, and Saturday, April 27th at 1pm and 7pm.  A special, low-cost preview will take place on Wednesday, April 24th at 7pm.

With 27 actors, many of whom have competed in Teen Star and performed in other youth productions in and around Santa Barbara, Lights Up! promises a professional, full-scale production of the Broadway hit Big Fish: The Musical.  Production staff includes Amy Love, Director and Betsy Woyach of Momentum Dance Company, Choreographer.

Loosely following the blockbuster film plot, Big Fish: The Musical follows father-son duo Ed and Will Bloom on a journey to reconnect with each other.  Ed Bloom, a traveling salesman, has spent his life telling tall tales, and as as result has left his son Will Bloom feeling like his father is a stranger.  On the eve of his wedding, Will resolves to better connect with his father before it’s too late.  A delightful, fantastical journey through the imagination of an Alabama farmer, Big Fish promises a moveable feast of mermaids, witches, giants, and even a traveling circus as part of the storytelling festivities.  Lightly narrated and as heartfelt as it is whimsical, Big Fish promises to be a delight for audiences of all ages.

Founded by veteran members of the theatre and Santa Barbara community, Lights Up! Theatre Company provides a professional conservatory experience to students ages 12-18 by providing opportunities to perform in one or both of their Acting Track and Musical Track.  Previously, Lights Up! made their official debut at Center Stage Theatre just last December with A Christmas Carol.  This semester, they are focusing their efforts on the recent adaptation of a beloved film, Big Fish. 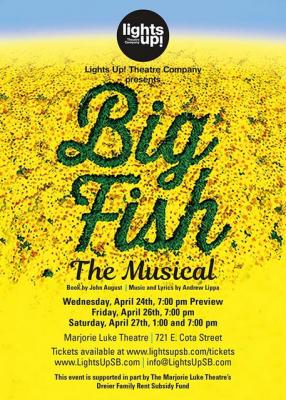