Tickets can be purchased in advance online for the film, and, or VIP After Party:  https://sbfungi.brownpapertickets.com

When so many are struggling for connection, inspiration, and hope, Fantastic Fungi brings us together as interconnected creators of our world.

Fantastic Fungi is a consciousness-shifting film that takes the audience on an immersive journey through time and scale into the magical earth beneath our feet, an underground network that can heal and save our planet.  Through the eyes of renowned scientists and mycologists like Paul Stamets, best-selling authors Michael Pollan, Eugenia Bone, Andrew Weil, and others, we become aware of the beauty, intelligence and solutions the fungi kingdom offer us in response to some of our most pressing medical, therapeutic, and environmental challenges.

This stunning documentary explores the power, beauty, complexity, and importance of the often-overlooked fungi kingdom, offering solutions to some of the most pressing medical and environmental challenges we face.

Fantastic Fungi is being released in tandem with the book Fantastic Fungi: How Mushrooms Can Heal, Shift Consciousness, and Save the Planet. Edited by Paul Stamets.  The book will be on sale at the event.

Louie Schwartzberg is an award-winning cinematographer, director, and producer whose notable career spans more than four decades providing breathtaking imagery using his time-lapse, high-speed and macro cinematography techniques. Schwartzberg is a visual artist who breaks barriers, connects with audiences, and tells stories that celebrate life and reveal the mysteries and wisdom of nature, people, and places.

Louie’s theatrical releases include the 3D IMAX film Mysteries of the Unseen World with National Geographic, narrated by Forest Whitaker; the documentary, Wings of Life for Disneynature, narrated by Meryl Streep, and Americas Heart and Soul for Walt Disney Studios. 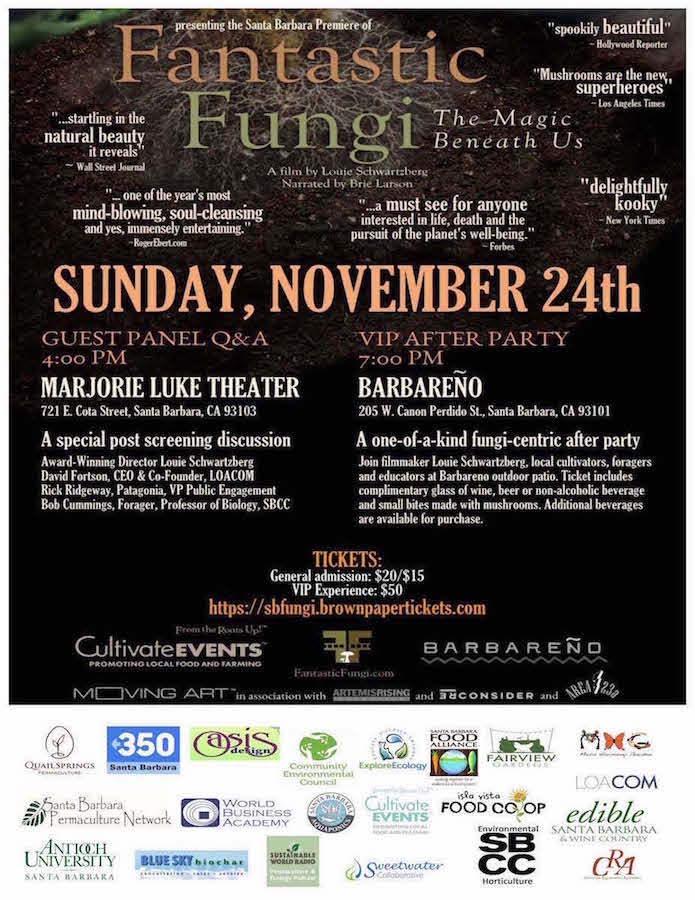