The United Nations Association of Santa Barbara and Tri Counties is delighted to announce the nominees for the 2019 Peace Prize. “We have received seven simply stunning nominations this year for the Peace Prize. We are so excited to honor the individuals in this community that are doing amazing work in the world,” said UNASB President Barbara Gaughen-Muller.

The Santa Barbara UNA Peace Prize was created by the United Nations Association of Santa Barbara and Tri Counties (UNASB). The chapter is the oldest one in the United States, having formed in 1947, and spans San Luis Obispo, Ventura, and Santa Barbara counties.

The nomination criteria for the UNASB Peace Prize:

Nominations opened in May, and closed in July. The Peace Prize Committee then reviews the nominations, scores the entries, and selects the winner.

The Nominees for the 2019 Santa Barbara Peace Prize:

1.    Evie Treen, founder of Friends of Woni International that builds wells and schools in Kenya.

2.    Sue Mantle DeCicco, founder of the Peace Crane Project, inviting every child in the world to wage the cause of Peace, while increasing writing and language skills, and exposing them to the geography of the world. 2.5 million children have participated in the project across 150 countries

3.    Dr. Lori Leyden, founder of Create Global Healing that works with victims of trauma from genocide, refugees, and school-shootings

4.    Professor Joe White, creator of A World Without War to extend the Olympics Truce worldwide to a full year in 2024.

5.    Leslie Clark, founder of Nomad Foundation that helps nomadic tribes in Niger support themselves with traditional and new technologies such as solar power and water well drilling.

“The United Nations Association is delighted with the quantity and caliber of the nominees,” said Peace Prize Co-Chair Sharon Byrne. “Clearly, our community cares about our world, and is working very hard to make a difference.”

The winner of the 2019 Peace Prize will be announced at the Annual Peace Prize Dinner to be held September 26th at 5:30 PM at the University Club of Santa Barbara.

Tickets and sponsorship opportunities available at our website http://www.unasb.org/. 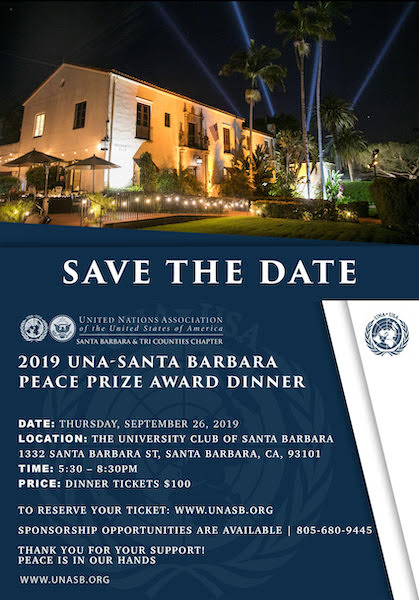 Can't wait to see the test

I got you babe,

And what else do you want to

Twisted but sensible to me.

all of my kids go there and