On Monday, February 17, 2020, at about 1803 hours, SMPD officers were dispatched to Costco, located at 1700 S. Bradley Road, to conflicting reports of shots fired inside the business and a subject vandalizing televisions. As officers responded to the area, additional calls came into the communication center with similar reports. As the first officer arrived on scene, a suspect matching the description provided by witnesses ran out of the business and into the parking lot.

The officer ordered the suspect, later identified as 25 year old Santa Maria area resident Jose De Leon Dominguez, to stop; however, he refused the officer’s orders and continued to run away from the area. The officer followed Dominguez and contacted him near the intersection of Meehan and Bradley Road. Dominguez resisted the officer’s efforts to arrest him. A few bystanders in the area helped the officer restrain Dominguez until additional officers arrived on scene and arrested him.

Officers’ investigation revealed Dominguez had entered Costco and pushed two large televisions onto the floor, causing them to break. It was this sound that prompted 911 calls regarding possible shots fired. The total damage to the televisions exceeded $3,000.00.

Dominguez was ultimately transported and booked into the Santa Barbara County Jail for felony vandalism and resisting arrest with bail set at $25,000.00. 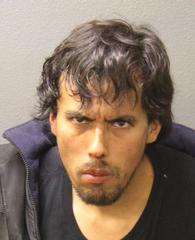 Well, there really isn't all that much else to do on a Monday evening in Santa Maria.

That's very true, Rex, especially considering that all of the usually awesome Costco food sample stations were already closed for the day.

Does he have a Costco card?

I wonder if he was at the weekend cooking party where they were doing something with honey?

Oh, that breaks my heart–destroying those magnificent TVs. Gazing at them longingly is one of my joys when I go to Costco. They're so wonderful that I almost forget that I watch one the size of a breadbox at home. And that's what I can afford. Maybe the vandal is in the same boat: the longing for a humongous screen could drove the perp to destroy the temptation. That and the sample stands being closed. Tragedy. In the light of current events, it's good to have a dose of reality.