Brand Farms was expected to be the model for legal cannabis growing in Santa Barbara County until it was raided.

A new article by Joe Mozingo of the Los Angeles Times delves deeper into Barry Brand's marijuana operation and how it ties into botched legislation and approvals by County Supervisors.

Barry Brand, 57, runs Brand Farms LLC in the 5300 block of Foothill Road in Carpinteria. He's part of a Dutch family with eight generations of farming experience. The Brands, and fellow Dutch farmers the Van Wingerdens, are credited for bringing the cut-flower industry to the Carpinteria Valley many years ago. Both families are now growing marijuana in many of their greenhouses, wrote Mozingo.

Brand is described as an influential figure among the small coastal town, donating tens of thousands of dollars to local nonprofits and hosting a variety of fundraisers. He was an initial member of CARP, the Cannabis Association for Responsible Producers, which many of the group's members played a large part in developing local cannabis policy by hiring lobbyists, attorneys, and communication firms. Brand himself contributed $8,000 to County Supervisor Das Williams and $2,000 to County Supervisor Steve Lavagnino, according to the Los Angeles Times.

Then on January 22, the Sheriff’s Office Cannabis Compliance Team, California Department of Food and Agriculture Cal Cannabis, and Department of Fish and Wildlife assisted in a search of Brand's cannabis farm.

The warrant included four parcels, with only one of the parcels having a license for the cultivation and processing of cannabis. Investigators discovered off-book, or black market, marijuana sales and a small volatile extrication lab along with extracted oil, which is outside of the grower’s license and is known to be combustible if produced incorrectly.

Investigators also found 20 pounds of illegally stored cannabis as well as over 1,000 pounds of cannabis crude. That amount of crude oil would be worth between $1.1 million to $1.6 million in California if legally sold wholesale.

Brand was issued a citation for illegal possession of marijuana for sales (misdemeanor) and the Sheriff's Office stated the investigation is ongoing. 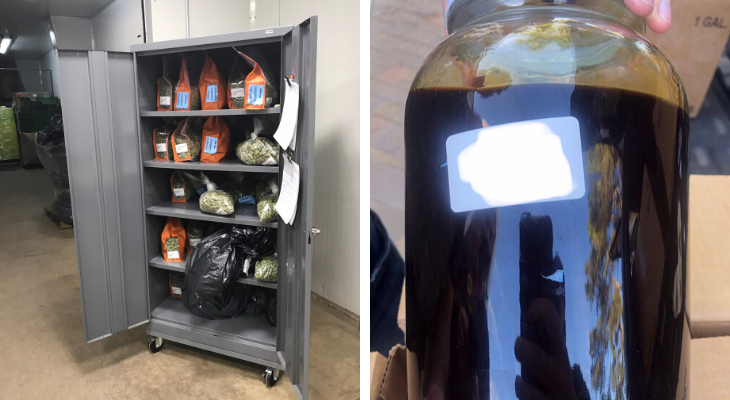 The raid has shown how local officials and County Supervisors voted to approve cannabis farms for state licensing with very little information on those farms. A tracking system that is supposed to make it difficult for farmers to divert as little as 2% of their product to the black market has been virtually ineffective as the country reportedly does not have access to the state tracking data.

Mozingo breaks down the numbers showing how Santa Barbara County Supervisors, specifically Lavagnino and Williams with help by county executive Dennis Bozanich, created a system rife with loopholes resulting in the loss of tens of millions of dollars for the county and an overabundance of cannabis farms.

One of the biggest criticisms of Supervisors is their approval of a 4% tax on gross receipts instead of a tax based on the licensed square footage of the crop. Since the majority of growers only deal in cash and the county does not have access to state tracking data, the tax collector's office is taking growers at their word for how much they've made, wrote Mozingo.

CARP Growers stated Brand resigned his membership from their organization after the raid.

Read the full article at LAtimes.com.

Pretty sure “the crowd” is

I am the one that wrote about

All I see in the video clip