Jasmine and Bono on view at the Santa Barbara Zoo

Bono will be a companion to the Santa Barbara Zoo’s elderly female gibbon Jasmine, who just turned 42. Both Jasmine and Bono recently lost their companions, and they were matched by the Association of Zoos and Aquariums (AZA), which collectively manages species in their accredited zoos.

“Gibbons are social creatures and live in lifelong monogamous pairs,” shared Dr. Julie Barnes, the Zoo’s Vice President of Animal Care and Health. “We have been looking for a companion for Jasmine since her elderly male mate Gulliver passed away in 2016. After losing her younger companion, Jari, last year, we're hopeful Bono will be a wonderful match. We look forward to Jasmine and Bono living out their golden years here with us at the Santa Barbara Zoo” 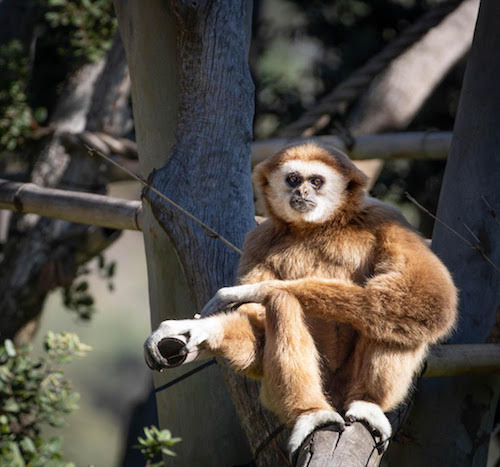 Bono at the Santa Barbara Zoo

Bono, whose parents were named Sonny & Cher, was born at Yerkes Primate Lab at Emory University in Atlanta, Georgia, and moved to the Sequoia Park Zoo at the age of two, to pair with Joh-leen, a young female gibbon at the time. Bono and Joh-leen shared their exhibit and lives together for 35 years, until last August when Joh-leen passed away after many months of illness and treatment.

Bono will join Jasmine, who arrived at the Zoo in 1979. She is an extremely long-lived gibbon at age 42, and has been diabetic for the last three years. Her diabetes is currently managed with oral medication and dietary management. “Since Bono arrived, Jasmine’s been exhibiting positive behaviors I’ve never seen before in the 15 years I’ve worked with her. We are happy to see her so engaged,” says Senior Keeper Heather Leith.

The white-handed gibbon has a small body size which causes it to be classified as a lesser ape. Their arms are relatively longer than their legs, which allows rapid movement through the forest canopy. They can be either black or buff-colored and have white hands and feet, thus the name. Found in Thailand, the Malaysian peninsula and north Sumatra, they spend their entire lives in the tall trees of tropical rainforests. They eat fruit, young leaves, and a few invertebrates, depending on availability, and show a preference for fleshy, sugary fruit and figs. Gibbons define their territory by loud singing and spectacular gymnastics. Destruction of the rainforests and poaching are the primary threats to their survival.

About The Santa Barbara Zoo

The Santa Barbara Zoo is open daily from 10 AM to 5 PM; general admission is $19.95 for adults, $11.95 for children 2-12, and free for children under 2. Parking is $11. The Santa Barbara Zoo is accredited by the Association of Zoos and Aquariums (AZA).  AZA zoos are dedicated to providing excellent care for animals, a great visitor experience, and a better future for all living things. With its more than 200 accredited members, AZA is a leader in global wildlife conservation and is the public’s link to helping animals in their native habitats. Visit www.sbzoo.org.

Oh yay, this makes me so happy! Jasmine seemed so sad and lonely last time I went to the zoo. I'm so glad to hear it's going well with her new companion :)

What are those "positive behaviors" that Jasmine has been exhibiting?

I just read the article on "Hug Train" in today's post. Here's a quote: ". . . states that loneliness has been linked to premature deaths at similar levels of cigarettes and obesity. Hugs have been shown to have a positive impact on all of the health issues that loneliness causes, be they physiological or psychological in nature." Some of us enjoy a lot more or less more alone time than others, but "everybody needs somebody sometime," is not just something Dean Martin sang. It's in our DNA and not just for mutual protection or aid or sex, we evolved in groups.

Shall we take bets on how

it will open up after the