On December 10, 2019, at approximately 2:16 PM, Officers responded to a call of a battery that had just occurred in the 00 Block E Mission St.

The involved victim was described as an elderly male. The suspect was described as previously assaulting the male victim and was last seen walking east on Mission St and being followed by a witness. 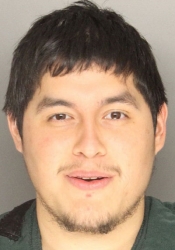 Officers then contacted two victims, a man in his seventies and a woman in her sixties.

The summary of the events are as follows:

The suspect attempted to gain entry to a residence.

An assault ensued outside the home and police were called. Evidence indicated that Torres attempted to strangle the elderly male victim and picked up the female victim and began to carry her.

Torres was arrested and booked at County Jail on the following charges:

Heard this call but it was confusing at the time.

Yikes, what a nightmare!! Hopefully it was drug related and not his normal mentality. If it's drugs there is hope, if not he's just dangerous.

DEC 15, 2019 07:56 AM Your comment falls under the category "Pollyanna Principle:" ###########"The Pollyanna principle (also called Pollyannaism or positivity bias) is the tendency for people to remember pleasant items more accurately than unpleasant ones." (Wikipedia) Which also means you need to take off the rose-colored glasses, my dear.

Tons of people do drugs and manage to not commit violent crime.

What's with all these random assaults recently?

Through some quick research I found out he raped a women at a gas station he worked at in 2016. I also found another case filed 2 years later in late 2018 called Jane Doe vs Josue E Torres. Could be a different case, but it could've been a civil suit related to the 2016 case. Judging by the way hes smiling in his mugshot it seems like he could be suffering from mental health issues. Seems like a dangerous guy who probably shouldn't be let back into society, especially with multiple violent crimes so early in his life.

I am appalled at the comment “ hopefully it’s drug related and not his normal mentality”, really?! This was a violent crime and there is no excuse. Those who carry out these kinds of crime already have issues regardless of drug use. To find out this guy is a rapist on probation for a crime that only happened 3 years ago is sickening. Rape is a violent crime. This guy should still be in jail. Rapists and child molersters are not reformable. Throw away the key.

The mental health association has been calling sex offenders mentally ill for years now there are half way houses and hospitals attempting to cure sex offenders. Some of these homes are here in Santa Barbara.

Roger. I wouldn't say "cure" as much as trying to teach them to avoid certain behaviors and stay out of trouble.

We can only hope it works...I know several offenders.

Those convicted of preying on the young, old, disabled--those weaker than themself--should never be free to repeat.

He’s smiling because he knows our laws are weak and he’ll be out again in no time to commit more crimes. In my opinion, he needs a good ass-kicking and run out of town.

He's not smiling, he just has his lips parted. Snapshots are a frozen moment in time and, if taken while in the middle of movement, can be very misleading. (Political propagandists love to extract frames out of videos that make their opponents look bad.) Which is not to excuse this guy at all, just to inject some intellectual honesty.

Beg to differ. Focus only on the eyes. It's a smile, but a smirk of a smile.

He is smiling but he may not be smiling now...