Fake cobwebs used for Halloween decorations can pose a real threat to wildlife, especially birds, according to experts.

The National Retail Federation reports Americans are expected to spend $2.7 billion on Halloween decorations this year and wildlife activists and experts are urging people to be mindful of local critters who may get caught and become injured.

Several years ago a Screech Owl was caught in fake spiderweb decorations in Northern California. An animal rescue team responded and were able to free the owl who made a full recovery and was eventually released. 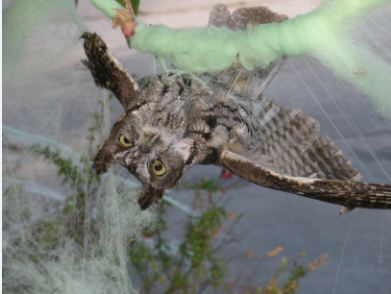 "Fake cobwebs have been known to cause intestinal damage in cats and can be especially hazardous to birds that can easily become entangled in the webbing," said Lisa Bloch from Marin Humane Society.

Experts also remind people to properly dispose of candy as some are toxic to wildlife and candy wrappers as they can get stuck in digestive tracts or cause wildlife to choke. The National Wildlife Federation reports birds and other small mammals enjoy pumpkin seeds.

Below is a video of the Western Screech Owl's rescue and release.

I have real cobwebs all over the inside of my studio if anyone is interested I can sell them.

That sucks I did not think fake cobwebs could do that till I saw this bummer for the owl..

Roger, you're so fun. Our house sports cobwebs in many areas. We have a couple "pet" spiders in our pantry and we try not to disturb them too much. For the past month there's been a big cobweb all across the bottom of one window on our front porch. I guess, at this point in time, the web can be our way of joining in on Halloween celebration/decor.

My yard is full of real spider webs right now. This stuff looks cool, but not worth the risk to wildlife. Lots of other creative ways to decorate. Thanks for the awareness campaign.

We have used it for the past 30 years without a single problem. The trick is to treat the phoney webs like any toxic material.

Bells don't work. Cats catch most of their prey by remaining motionless and then pouncing. The bell doesn't go off until too late. But if you like the sound of jingle bells around your house, don't let the facts stop you.

Bells on cats do work to reduce hunting success. https://catsandbirds.ca/blog/why-not-just-bell-the-cat/We live behind a large natural open space and see the neighbors cats out every evening. Sometimes they catch mice, but they are hunting where many birds build the nests. According to an article in USA today, cats in the U.S. kill 3.7 Billion birds annually. https://www.usatoday.com/story/news/nation/2013/01/29/cats-wild-birds-mammals-study/1873871/

Please, can we just stop with this constant alarmist stuff from so-called "experts"? Oh, wow, "several years ago a Screech Owl was caught in fake spiderweb decorations in Northern California." And, Lord forbid, "Fake cobwebs have been known to cause intestinal damage in cats." What about cars hitting wildlife, cats, dogs or birds flying into windows? I guess we better ban those, too. And all that toxic candy, too, that can pose a "choking hazard" to wildlife. Jeez, give me a break. Most of these incredibly dangerous "fake cobwebs" don't even look or act like cobwebs because people don't know how to apply them properly - most look like rope strung across hedges. This must be a PETA sponsored article.

At 10:34. If you are that concerned about animals perhaps you think people shouldn't exist since we obviously harm them just by living on this planet. And please don't assume I have no compassion for animals; I am a member of several wildlife organizations including Cal Trout, Ducks Unlimited, Pheasants Forever, Trout Unlimited, and others. But this stuff about fake cobwebs is just plain nonsense and how our alarmist culture makes us afraid of everything. Here, this article should make you happy: https://www.pacificresearch.org/californias-endangered-freedoms-2/

BIGONE. Hate to break it to you, but belonging to various hunters' organizations does not make you a proponent of wildlife. It makes you someone who likes to hunt and kill wildlife.

To 03:23, if it wasn't for conservationists who support sustainability, wetlands, and wildlands our wildlife would be in far greater peril. You didn't mention Cal Trout or Trout Unlimited, but I practice catch-and-release and haven't killed any salmonids in many, many years. The animals I kill are put to good use for friends and family and the few tuna I catch are usually released unharmed, and those that aren't are donated to food banks. By the way, I also am a member of the Nature Conservancy - does that qualify as a proponent of wildlife? Perhaps you'd like to comment on what organizations you belong to. Vegan? PETA member?

I'm a pretty hardcore environmentalist and I ALWAYS see the danger in things for animals and wildlife. I have to say that even from where I stand, this seems pretty alarmist... Check your fake web for trapped owls, I guess, but of all the environmental problems we face like massive pesticide use, over fishing, everyone washing endless chemicals and microplastic from fleece clothing, etc. down their drains daily - this is really not high on the list of real concerns. I'd do almost anything to protect wildlife but this is overkill.

lol this is just over the top and stupid...
i love animals. but this...ok so an owl several years back got caught. everyone cancel decorating their homes. no thanks! mine always has a stream of people viewing the decorations. No owls. Maybe a fly or two...
just dumb...

It really seems a bit much for Edhat to offer this scold when as far as I can ascertain Edhat is totally defensive of the damage done to nature by cats that run loose in every neighborhood every night and day.

Edhat provides unbiased information for local readers to comment on and discuss. The comments by edhat readers do not reflect the position of edhat staff.

Not clear to me what the Edhat comment in response to my posting is saying. But this op ed was signed "by EDHAT STAFF" so it does seem to represent the view of Edhat. Of course my comment about Edhat being "defensive" may be the point. If so, I agree that it is just one reader's opinion formed from years of subscribing and reading the site.

Hi RHS, this is a news story based on advice and alerts from wildlife experts written by the edhat staff as a news article. It does not contain opinions but information for people to discuss. Glad you're part of the discussion! Sincerely, edhat staff

Real spider webs kill wildlife too. Then the spider eats it.

RHS. Yup. And power lines kill birds too. I was so sad to come to work a couple weeks ago to find a dead hawk just under the high power line. I felt terrible for the poor little guy. There are dangers everywhere for wildlife and humans alike. Out my front door the other morning was a dead dove. Pretty little thing. Must have run into the window and broke his neck. So sad. A couple years ago while driving over a grade on 101 a semi hit a turkey from the other side of the highway and the poor thing flew over all dilapidated and hit my car. He didn't die right away. I literally had to pull over and cry after that incident.

01:33: Don't despair. The law just signed by our governor now allows us to harvest and consume all road kill. I heard the The Restaurant Guy will be posting about a new SB eatery featuring roadkill!

THANK YOU Edhat for alerting folks to this very REAL danger to birds. To the selfish whiners I say decorate all you want, just skip or go lite on the webbing. That’s all. The life of one bird is of far greater value than your selfish whims.

For all the people complaining about this.... have a heart! Get REAL! This crap is bad for the environment too. I love Halloween to the point of obsession, but those fake spider webs are STUPID, and they don't look scary, and it's just waste. So. Much. Waste. You cannot re-use it, you just throw it away, and for that reason alone, it should be dumped as a decoration. There are SO many other cool ways to go off for Halloween that don't include wildlife and environmental harming materials. Jeebus.

Thank you for caring for our animal friends. We love Halloween and all of the decorations and now that we're aware of the dangers of webs we'll come up with something new and just as spooky! Respect and reverence ... thank you yet again

I noticed that cars were brought up as a potential hazard to birds and other wildlife. Obviously we need to eliminate cars in the long term. However, as an emergency short term measure I propose we institute a nationwide 25 mph speed limit. The reduced speed will help protect birds and other wildlife. Fuel economy is also greatly improved, reducing devastating CO2 (plant food) emissions. I think the reduced speed would also help mitigate road rage and "calm" traffic. Someone also noted that windows on buildings are a hazard to birds. I think that Santa Barbara should start requiring a bird flight path study be conducted for all new construction with exposed windows. This innovate, first of its kind measure would set a new standard in environmental protection. Perhaps we could even implement a window buyback program to help eliminate all the existing windows in santa barbara...

Chip, don't worry, I heard our governor is already implementing such a study and plan alongside his study to determine why gasoline prices are the highest in the country. :)

Chip! Don't give them any ideas.

Humanity is a threat to wildlife.

I think you hit the nail on the head! It's time we develop a plan to phase out humanity in Santa Barbara.

Not much humanity on display since the herd of idiots descended on this topic.

Yeah, but the bugs HUGE back