On October 15, 2009, Riley finished his basic Search Dog training and was paired with Captain Eric Gray of the Santa Barbara County Fire Department. The team worked extremely hard and after seven months of training together, they passed their FEMA Certification on May 15, 2010 in Boston, MA.

Eric and Riley continued to train intensively to maintain the very specific, high-level skill set needed for disaster search. In addition to their regular daily training on obedience and obstacles, Eric and Riley traveled at least twice a week for search training with their teammates on California Task Force 2, based in Los Angeles. 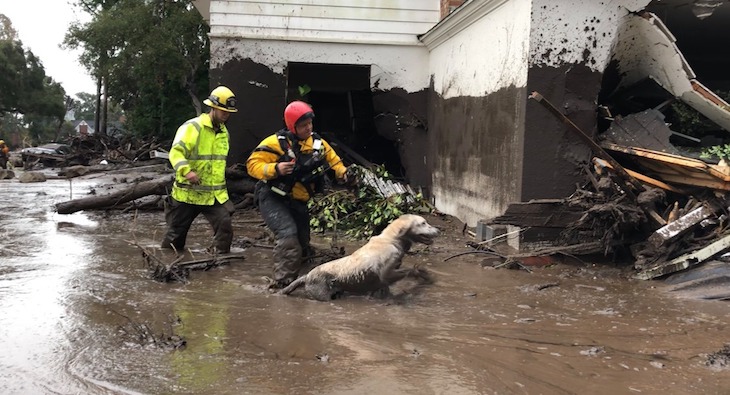 Riley and Eric have had several high profile deployments over their career together. On August 24, 2010, Eric and Riley responded to their first disaster, a semi-truck loaded with gravel had launched off the road and into a Santa Barbara home. Riley Worked tirelessly ensuring no victims were left unaccounted for.

Riley’s work was not limited to local incidents, On March 10th, 2011, while assigned to Los Angeles County FEMA Task Force 2, he and Captain Gray were deployed to Japan to search for victims in the aftermath of the devastating earthquake and tsunami.

On April 26th 2015 Captain Gray and Riley were again deployed overseas to provide their services to the victims of the Nepal Earthquake. They worked for over a week looking for and locating victims amongst the rubble.

In 2017 the duo brought their skills to Puerto Rico to search for victims of Hurricane Maria.

At eleven years of age, eight of them spent as Eric’s partner, Riley retired from Santa Barbara County Fire Department and California Task Force 2. Having slowed down a bit since his puppy days, Riley now enjoys life as a family pet in the Gray home. Thank you for your service to the people of this County, Nation and around the world, Riley!