Restaurant Gauntlet: Who's Coming and Going

This past week edhat readers have submitted numerous emails about local restaurants closing in the downtown area. While some restaurants are saying goodbye, others are shaking things up to stay competitive.

Let's start with the sad news and end on a happy note.

Locally owned family restaurant Hoffmann Brat Haus announced they are closing their doors. The Bavarian-style restaurant served a variety of interesting sausages and bratwurst as well as numerous European beers.

On August 15, the restaurant announced on Instagram they will be closing their doors. "State Street is not what it was just two years ago. We can no longer sustain the restaurant," the post read.

The Little Door has... well, shut its door.

The French-Mediterranean restaurant opened in 2017 at 129 E. Anapamu Street across from the Sunken Gardens, a location that many locals feel is cursed. Numerous restaurants have come and gone from that area but few have managed to stay more than a few years. Elements, The French Table, and the Piano Riviera Lounge all tried to make a go of it.

On July 2 the restaurant announced on Instagram "due to necessary kitchen improvements and restructuring" they will be closed for two weeks. However, John Palminteri reports they are closed for good and have sold some of their furniture to Embermill which opens on Friday (more below).

The Funk Zone restaurant featuring Mediterranean dishes with intricate cocktails and a high-brow wine shop is set to close and make way for a new concept by the same owners.

Matt Kettmann of The Independent detailed Les Marchands journey since its 2013 opening. The restaurant is located at 131 Anacapa Street behind Figueroa Mountain Brewing Company. It's owned by Acme Hospitality who also owns The Lark, Santa Barbara Wine Collective, Helena Avenue Bakery, Tyger Tyger, and Loquita. So, I think they'll be just fine.

They're currently scheduled to host "Follies: A Drag Brunch" on Sunday, August 25 as the conclusion of Santa Barbara's week-long LGBTQ Pride events and another event on September 10, which is scheduled to be their last day.

Giovanni's Pizza on the Mesa

And then there was one. Giovanni's Pizza had numerous locations throughout Santa Barbara's south coast at its peak, but now they are down to their final location at 3020 State Street.

Their Mesa pizzeria at 1905 Cliff Drive shut down earlier this month. A simple message on their website reads "Our Mesa location is now closed. We thank the wonderful community of Santa Barbara for all the business over the years."

There's no word yet on what business will take over the location.

The former location of Aldo's at 1031 State Street is being renovated for a new restaurant named Embermill.

Chef Harold Welch is behind the new concept that is slated to serve up "Carribean food with a Santa Barbara twist." Jamaican Jerk chicken, catfish and soft shell crab po' boy sandwiches, and fried okra are on the menu.

Welch also runs the Solvang restaurant Hummingbird. Embermill is scheduled to open on Friday, August 23 for breakfast and lunch, according to their website.

This is also the former home of the historic Copper Coffee Pot, as many edhat readers have lamented in the comment section. Aldo's was also in this location for quite a while so it could mean good things for Welch.

[An edhat reader shared links to photos of the historic Copper Coffee Pot in 1927. See the interior here and the street view here.]

Now look across the street to the former home of Palazzio at 1026 State Street and you'll find a new restaurant named Oppi'z.

The Italian eatery describes itself as a "modern, nonconventional healthy food concept rooted in the tradition of the Italian cuisine and the 'Slow-food' manifesto." Owner Guido Oppizzi is aiming to reinterpret the traditional concept of the pizzeria. According to their website, he designed a unique menu with a variety of gourmet pizzas and a selection of fresh, light and healthy dishes.

A signature dishes include "Black Rice Bottles," which I can honestly say I've never seen before. The description is in the name, it appears to be a clear hollowed out glass bottle filled with rice and toppings.

The restaurant is currently open, let me know how the bottle rice tastes.

Mosto Crudo has changed its name to simply Mosto, or more specifically Mosto Wine Bar & Tapas, as their menu expands to more than just raw foods.

They're also offering brunch on Sundays through the end of September. Learn more on their website and check out my previous restaurant review here.

The Project Combines Tacos and Beer 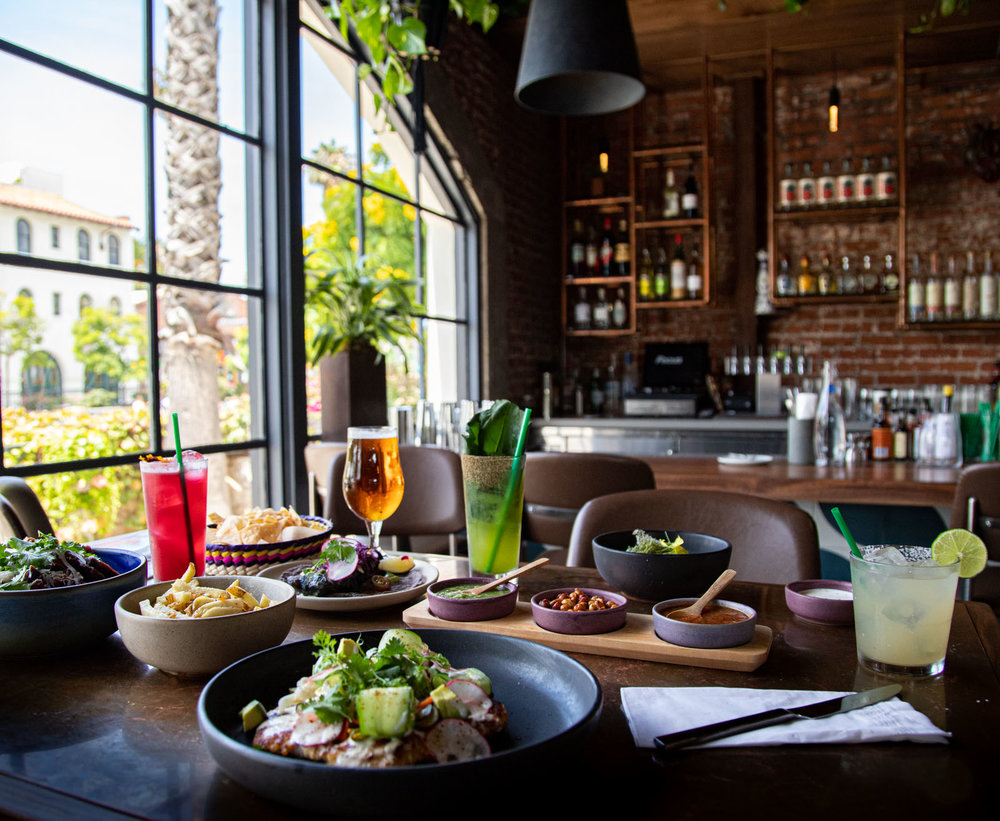 The Project opened up less than a month ago at 214 State Street, the former home of Union Ale and numerous other things.

The founders of Santa Barbara’s Corazon Cocina and Captain Fatty’s collaborated on this "project" by completely renovating the space. The massive remodel took the building down to its studs (see it here) before opening on July 26.

Corazon Cocina still has its original location in the Public Market at 38 W. Victoria Street and Captain Fatty's brewery is located at 6483 Calle Real in Goleta.

Half of the building is dedicated to Corazon Cocina's menu of tacos, tostadas, and even an octopus burger. They also serve up a variety of cocktails, beer, and wine. The other half of the building is more of a taproom focused on Captain Fatty's brewery selection as well as including cider, wine, and craft beers from other breweries.

The advantage this place has over other combo style eateries and bars is they share the space, meaning patrons don't have to stay in a designated area where the beverage/food was purchased to consume it. Learn more at theprojectsb.com.

Lauren is a member of the dedicated staff of edhat.com. She enjoys food and beverages but refuses to capture photos of fancy food for her Instagram page.

Ok then, speeding in the rain

The women he grabbed welcomed

I bet some of those offended

If you want to know whether

I really could care less what

Who is disparaging the women

See the added video for those

If it was my toy airplane

Constant and they are not the

The truck is going to be