Turning Off the Tap

It has been estimated that 8 million tons of plastic waste enter the ocean each year, with that number growing annually. Where is it all coming from?

Among other places, rivers. In fact, research suggests that a small number of rivers contribute a disproportionately large amount of plastic waste that flows into the ocean — and do so at a collective rate of as much as 275 tons every hour. 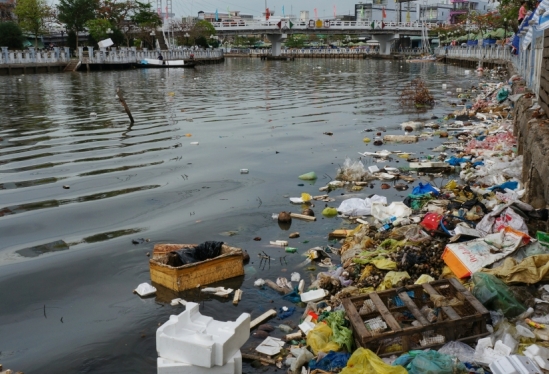 It’s adding up. And it’s creating major challenges for fish that are important sources of seafood and for other forms of ocean life, including sea turtles, sea birds and whales.

Now, the Benioff Ocean Initiative, a center for applied ocean research based at UC Santa Barbara, is partnering with The Coca-Cola Foundation to fund a plastic waste capture system in a major polluting river. Each partner will contribute $1.5 million to form a $3 million fund for an interdisciplinary team to launch a system that will curb the flow of plastics from river to ocean. Captured plastic waste will be recycled, re-used or disposed of responsibly.

“I’m really excited about this partnership,” said Douglas McCauley, director of the Benioff Ocean Initiative and an associate professor of marine science. “UC Santa Barbara has been a leader in research efforts to understand the scope of the problem of plastic waste in the ocean and we are thrilled now to take a lead role in doing something about this important issue.”

The significant amount of plastic waste that flows into the ocean through a small number of rivers provides an opportunity to turn a problem into a strategic solution, the partners in the new endeavor agreed.

“The Coca-Cola Foundation’s support for the University of California Santa Barbara’s Benioff Ocean Initiative will not only enable the development of innovative applications to clean up river plastic, but also the recycling of the materials collected through the pilot project,” said Helen Smith Price, vice president of global community affairs and president of the Coca-Cola Foundation.

To launch the effort, the Benioff Ocean Initiative released a Request for Proposals that invites teams to submit ideas for a pilot river plastics capture project. Applicants are required to describe how the data collected by their river plastic waste capture system could be used to inspire change in plastic waste production and waste management system improvements.

“Not only do we want to build something that will immediately pull more plastic waste out of our rivers and our oceans,” said McCauley, “but we want to use the data and the story surrounding this captured plastic waste to help create the change we need to turn off the tap of plastic getting into our rivers.”

Conversations about initiating a river plastics interception project began with a research symposium held at UC Santa Barbara in 2018. The event brought together world experts in hydrology, industrial ecology, watershed governance and riverine engineering, as well as thought leaders from non-governmental organizations and the private industry. Similar coalitions of researchers, engineers and environmental leaders are expected to apply for the Request for Proposals.

The Benioff Ocean Initiative was founded in 2016 with an initial gift of $10 million from Lynne and Marc Benioff, chairman and co-CEO of Salesforce. The experimental enterprise aims to combine university researchers, students and global ocean communities to identify problems and solve them with emerging technologies.

Aside from spread due to

It already happened in Paso

But you can't SAY that.

Which costs the taxpayers

But hey, try and have a

What about SBCC's lots and