By the Montecito Fire Department

A wildfire detection camera is now installed on Santa Barbara’s TV Hill, providing coverage of the Santa Barbara front country. The ALERT Wildfire camera is part of a growing network for cameras across the western United States that help local, state and federal agencies watch for wildfires.

The camera provides 24/7 “eyes” on the fire-prone hillsides and eventually, will alert firefighters to new fire starts using artificial intelligence technology. The camera views are also publicly available so that community members can gain a better understanding of where a fire is burning.  The TV Hill camera can be viewed at this link: https://alertca.live/cam-console/2749

The camera on TV Hill and plans for another on Ortega Ridge in Montecito will join a network of hundreds of cameras that provide coverage of wildland areas. There are two existing cameras on Gibraltar Peak.

“Thanks to these cameras, it’s now rare that we respond to a fire without having eyes on it before we respond,” Montecito Wildland Fire Specialist Nic Elmquist said. “Until now, we had limited coverage of the South Coast’s wildland areas. It’s a huge advantage to be able to watch an incident emerge from the first puff of smoke.”

ALERT Wildfire is a consortium of University of Nevada Reno, University of California San Diego and University of Oregon, providing access to state-of-the-art Pan-Tilt-Zoom fire cameras and associated tools to help firefighters and first responders:

2.       Quickly scale fire resources up or down appropriately; 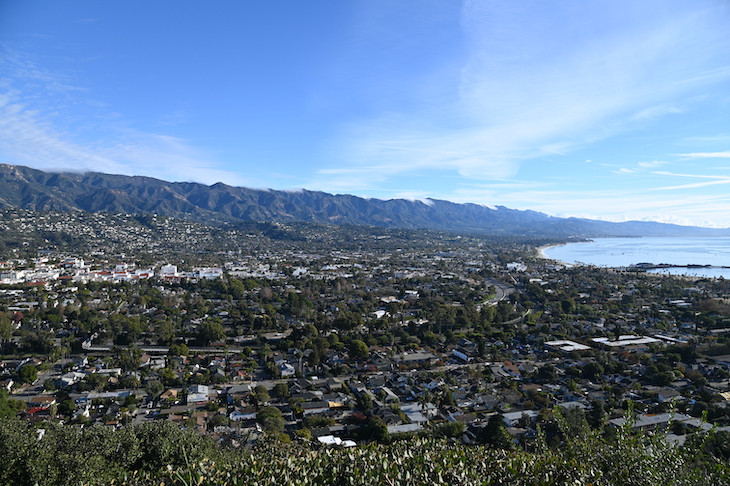 “Generations of Montecitans will benefit from this exciting new plan,” Siemens said.

“Community collaboration has been at the core of this project since our first conversation with Wayne,” Chief Taylor said. “None of it would be possible without the teamwork and support from Wayne, Santa Barbara City Fire and KEYT.”

Twenty thousand dollars have been allocated from the Montecito Fire Protection District’s general fund for the cameras.

An ALERT Wildfire camera will be installed near the Ortega Ridge reservoir in early 2023. Firefighters are currently looking for more locations to install cameras.

“A network of ALERT Wildfire cameras on the Santa Barbara front country will provide real-time monitoring of fires at their inception and reduce risk to our community members in the first 24 hours of a large-scale, wind-driven wildfire with evacuations,” Chief Taylor said.

I have a similar system on my property with 360-degree coverage and I love it. Provides accurate alarms 24 hours a day.

Great additions to our fire defenses. Will these cameras also spot “warming “ fires and illegal campfires?

Nice! Is there one between TV Hill and Highway 154?

But does this announcement mean SCE has no cameras between approximately Bates Rd. and downtown SB/TV Hill?
That must be remedied, and it's part of SCE's infrastructure maintenance and buildup.

Couldn't, SHOULDN'T the Sansum Medical building at 4151 Foothill Rd. and/or the County Emergency headquarters, County Fire & county-wide Dispatch up at 4410 Foothill, also host cameras on their roofs, pointed at the mountains and foothills? Of course they should -- unless the local mountain cameras are sufficient.
Have wildland SCE cameras been lacking in our east and Ventura Counties?

map of ALERTCalifornia.
https://alertca.live/cam-console/2749
I don't yet see how this ties in with other state-wide government and utility cameras. I sure hope they at least TRY to cooperate and streamline similar efforts!

I did look into contacting them. It's Montecito Fire District, which I do not live in, and the online site requested my info. It also gave a phone #; I'd go that way to start.
I can contact SB City and County myself to find out the extent of local cameras.

1. Click on any camera on the Alert CA map and you will see many of them show PGE or SCE as the sponsor.

2. If you visit the Alert CA map for our region, you will see at least one of the two cameras @TV Hill has been rotating to provides a 360-degree field of view (FOV). The other one has not been rotating (at least today). I don't know which is the new camera recently installed but I'd guess it's the one that's been pointing at the Montecito front-country all day (it points straight at Romero Saddle). More on Alert CA's cameras here:

3. If you visit Alert Wildfire's site, you will learn most of the cost of a fire camera is in the infrastructure needed to support the camera. This includes towers and the communications link to access the data network. Some of the first Alert CA fire cameras were built on top of existing microwave links put in place for seismometers.

4. There are two more fire cameras in the SB/Goleta area. One is at Vic Trace Reservoir on the Mesa and the other is at UCSB. The camera at Vic Trace appears to be fixed/staring and has a relatively narrow FOV. It looks straight up towards Mission Canyon. The FOV of the UCSB camera also appears to be fixed/staring and its eastern edge covers Painted Cave.

5. Given that one of the TV Hill cameras rotates and we have three other (apparently fixed/staring) cameras at UCSB, Vic Trace, and TV Hill, it appears to me they are providing decent coverage of the front-country from Goleta to Montecito.

6. Sansum and the County office on Foothill may not be ideal locations for front-country fire cameras. Compared to the existing cameras located along the coast, they are closer to the foothills which limits their FOV. So my opinion is .... SHOULDN'T. That said, if we wanted to add more fixed/staring cameras, IMO the place to mount them would be at UCSB or Vic Trace. Then you can take advantage of existing infrastructure, communications links, etc.

Thank you for your thoughtful, educated response; I much appreciate it.

nifty...ya know what works great too? your eyes....it's a massive hillside and mountain that faces our city. I don't think a few cameras will change anything. Our eyes would detect the same thing.

ZERO - for the right salary, I'll stare non stop at the hills 24/7 lol

This is a good idea, but it does not address the elephant in the room. Why is a mountain covered in highly flammable and dangerous vegetation looming over Santa Barbara? Why are no efforts made to manage this vegetation to mitigate the risks of fire and flooding? Why don’t we have a more extensive network of access roads to facilitate firefighting and management of the vegetation? Why don’t we maintain more firebreaks? Why don’t we have an adequately sized debris basin to protect the city of Santa Barbara from post-fire flooding and debris flows?! Why don’t we carry out regular planned burns, grazing, and mechanical clearing operations to prevent hazardous fuel accumulation? Something tragic is going to happen sooner or later, and it is entirely preventable.

"Why is a mountain covered in highly flammable and dangerous vegetation looming over Santa Barbara?" - Because it's natural, just like you keep saying we need to keep it. Are you seriously suggesting we remove the vegetation? Do you have any idea (or care) about the wildlife that calls that brush home? You're so "concerned" about the environment and wildlife when it comes to renewable energy, but for fire suppression (it's what you're trying to do), you'd be ok with mowing down the habitation of hundreds, if not thousands of different species?

Sac, our current hands off approach leads to Thomas Fire type events. The Thomas fire was way more harmful to wildlife than anything I suggested. I believe the best way to manage an area like the mountain above Santa Barbara is through a combination of all the tools at our disposal.

Chip, it's rather silly you have to keep repeating yourself answering the same question phrased a dozen different ways.

CHIP - sure, I get that Thomas type fires are devastating, but what you're suggesting would wipe out, permanently (assuming this "maintenance" would be ongoing) the habitation of birds, mammals, insects, reptiles, possibly even fish. The desecration of these habitats would then lead to the larger predator mammals/birds being forced out of our hills and into our communities possibly. Do we need more coyotes and mountain lions roaming around Goleta? Nope.

I agree that fire breaks and certain thinning is necessary to give us some protection, but to mow down all the flammable brush in our mountains is not the way to do it. You keep saying we need to keep in natural, but this is the farthest thing from that.

We'll never agree, that's fine. But please think about the effects this would have on our ecosystem next time you complain about wind turbines hurting animals.

Sac, I’m not suggesting that we maintain a bald mountain. That would be a major debris flow hazard. Fuel breaks are just that, a small break separating large areas of fuel. That’s not a minor impact. Planned burns, mechanical thinning, and grazing are not wiping out habitat by any stretch. Instead, these activities will maintain the habitat in a state more consistent with natural historical norms. Fire is natural, and mechanical thinning and grazing operations are a safe substitute for fire near populated areas.

So just clearcut and see what happens?

"Planned burns, mechanical thinning, and grazing are not wiping out habitat by any stretch" - yes, by any definition of these activities, they are.

Sac and basic, you seem to be opposed to doing anything to manage the land, except for putting out every fire. That’s a fight you can’t win! We tried that for the last 100+ years. If we carry on with that approach it’s only a matter of time before we have the next iteration of the Thomas fire. Perhaps it will occur in the mission canyon watershed, and perhaps it will rain shortly afterwards. Sooner or later those elements will come together. If you think planned burns, fire breaks, and mechanical thinning are destructive to wildlife, you’ll be amazed to see what burning the mountain bare in one day will do. Then you can watch mission creek burst its banks and flood large portions of the city as the mud and boulders flow. If you fight against taking the management steps I have suggested, and you fight against building a larger debris basin, you are advocating for wiping out all the wildlife on the mountain in a conflagration spanning tens of thousands of acres and for the destruction of a large portion of Santa Barbara with flooding mud and debris flows. Is that really what you want?

"you seem to be opposed to doing anything to manage the land, except for putting out every fire" - never once said that anywhere. I actually stated multiple times that I agree with firebreaks and thinning like they did at the local park. Stop making things up.

Repair and reopen all the mountain-top Look-Out Stations and just for funzies, add a few more. Much more fun than a bunch of cameras. :)

Totally agree!! Bring back the Lookouts! Nothing like a human set of eyes scanning the horizon for smokes. We can catch them when they're super small (like when a stump is smoldering) because they tend to only pop up intermittently. Former Fire Lookout here :).

That step from space was taken years ago with the launch of the MODIS and VIIRS remote sensing instruments. They are onboard the Aqua, Terra, NOAA-20, and S-NNP satellites. You can see their fire detection products here:

That said, Planet Labs is one of the big players in newer-generation commercial satellite imaging products. They have a cubesat constellation (maybe 200 by now, mostly in polar orbits) and a smaller constellation of high resolution satellites that can be re-positioned. Their fire-related products are discussed here:

There seems to be a pervasive

Glad to see the museum back!!

The good things you do have

The comet was easy in