Cannabis critics had a chance this year to lend their noses to a controlled odor study at one of the many greenhouse “grows” that ring the seaside town of Carpinteria.

Last August, Coastal Blooms Inc., a group of cannabis greenhouse operators, commissioned a 48-hour controlled study at Roadside Blooms, a four-acre operation at 3684 Via Real. They had equipped the greenhouses with carbon filters or “scrubbers” from the Netherlands, and they wanted to find out how well the scrubbers working to get rid of the stench of pot.

The group rented an “olfactometer” from Germany and flew in Dutch engineers to help with the study. They bagged 260 air samples inside two Roadside greenhouses of similar size at harvest time, when the “skunky smell of cannabis is strongest. They also took samples upwind and downwind of each greenhouse, on the roof ridge lines and at the open roof vents.

The cannabis harvests are typically staggered, so it took “immense amounts of planning, man-hours and coordination” to harvest both greenhouses on the same day at the same time, according to a Nov. 14 report by SCS Engineers, a Santa Maria consulting firm.

One greenhouse was equipped with 15 scrubbers developed by the Envinity Group, a Dutch company. In the other, the scrubbers were turned off.

The results were made public this month. They show that on average, the Envinity scrubbers reduced the smell of pot by 84 percent before the gaseous compounds emitted by the cannabis could escape through the roof vents.

“Our focus has been trying to prove that scrubbers are a viable odor control methodology for both the growers and the community,” Phil Greene, president of Coastal Blooms, said. “Growers want to solve the problem; there’s just the constraints of paying for all this. It’s a heavy investment in a tough market environment.” 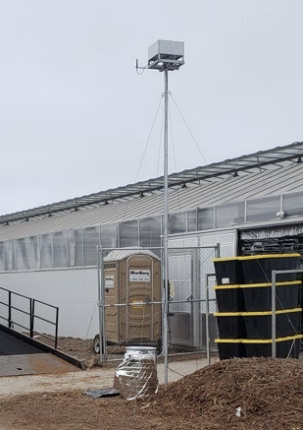 Air samples are pumped into bags inside sealed containers at Roadside Blooms, a cannabis greenhouse operation at 3684 Via Real. Courtesy photo.

The study was conducted by SCS; the Envinity Group, and Environmental Monitoring Systems, an international supply firm. The cost, between $750,000 and $900,000, was paid by Greene and his partners — Ed Van Wingerden, Mike and Adam Palmer and Amir-Hamsa Eskandari. Envinity scrubbers cost $20,000 each.

Roadside was chosen because it sits near the ocean, apart from other greenhouse operations at the western end of the valley. In the past, SCS has sent odor samples to a lab in Connecticut that can handle only a dozen sample bags per day. Performing the testing in Carpinteria with community members allowed for 10 times as many samples to be analyzed, the SCS report said.

CARP Growers, an industry group, reached out to 200 residents, asking them to participate, including a number from Concerned Carpinterians and the Santa Barbara Coalition for Responsible Cannabis, two groups whose members have appealed cannabis greenhouse projects and filed hundreds of odor complaints.

Ninety residents agreed to be screened as potential participants in “odor panels.” Using the olfactometer, they sniffed air samples that contained a chemical compound internationally used for screening purposes. Some said it smelled like parmesan cheese; others said it smelled like a dirty gym bag, Greene said. 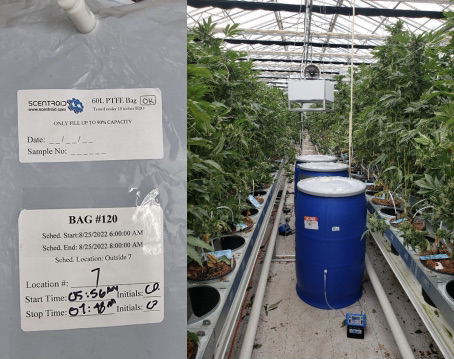 Tubing was run up a pole to collect air samples at the elevation of the vents in the greenhouse roof. Courtesy photo.

“We take a known concentration and present it to them in different dilutions to find individual perceptions,” he said. “Odor is an emotional thing. We were looking for the 80 percent that were representative of the average person.”

People who were too sensitive to smell or not sensitive enough were not chosen for the study. In the end, only 28 people — 11 community members, 10 Coastal Blooms representatives, three SCS engineers, two coalition members, one member of CARP Growers, and one member of the Envinity Group — made the grade as odor panelists. They were told not to smoke, drink coffee, wear perfumes, use toothpaste or chew gum before their panels.

Over a three-day period, the panelists were asked to smell the Roadside air samples during four-hour shifts in groups of four, seated around a table in an office in downtown Carpinteria. Each panelist had 15 seconds to sniff two streams of air coming from two glass nozzles called “odor cups” — one provided a stream of pure air and the other, a stream with a known dilution of an odor sample.

The streams alternated at random and the panelists did not know which was which. After sniffing back and forth from each cup, they were given another 15 seconds to signal whether they could detect an odor of any kind. They were then presented with rounds of ever-higher concentrations of the odor sample until all four panelists at the table signaled a detection level.

“You never tell the people what to smell,” Greene said. “We’re not measuring cannabis odor, we’re just measuring odor. Some people said they just felt something different in their nose.”

It was a difficult and tiring job. One of the panelists, Sandy Weil, a member of the coalition and Concerned Carpinterians, said that hours of sniffing made her nauseous and groggy.

“I could hardly walk out of there, I was so sniffed up,” she said. “It seems to cling inside your nose. Soon, I was tasting it and smelling it. It was hard for me to decipher what was going on.”

Weil, who lives in Shepard Mesa in the northeastern corner of the valley, is a member of both the coalition and Concerned Carpinterians. She said she filed has 10 complaints with the county in the past three years about the smell that hangs around “almost any time of the day or night” near the Glass House Farms cannabis greenhouse operation that is co-owned by Graham Farrar at 5601 Casitas Pass Road. Weil said she stopped filing complaints because there was no enforcement.

“The reason why I participated in the study is, I wanted to know more about what the growers were doing, and whether the smell test would make a difference,” she said. “Would we have a solution for all of us who have endured the smell for so many years? We just felt like our voices were never heard.”

In addition to Roadside Blooms, Coastal Blooms operates Ever-Bloom, Maximum Nursery and Creekside Blooms, cannabis greenhouses at 4701 Foothill Road, 4555 Foothill and 3508 Via Real, respectively. Ever-Bloom and Roadside are already equipped with Envinity scrubbers; and scrubbers will be installed at Maximum and Creekside early next year, Greene said.

Melinda Burns is an investigative journalist with 40 years of experience covering immigration, water, science and the environment. As a community service, she offers her report to multiple publications in Santa Barbara County, at the same time, for free.

Show Comments
Get a Whiff of This

Olfactometer! That is a good one.

Thank you again, Melinda Burns!
Carbon scrubbers should be required in many of these locations. Glad they're moving ahead. Also glad I no longer live in Carpinteria, almost at the end of Santa Ynez road...
I'm pro pot farming, but our county's growth of the industry was rushed and not regulated enough.

Glad there are people and companies addressing this issue that affects the quality of life of so many. The County of Santa Barbara should have funded this study since THEY are responsible for the irresponsible planning, ordanances and profiting off pot growers who choose to grow in close proximity to residental neighborhoods and schools.

Carpinteria brought this whole mess upon themselves with their shortsightedness and a desire to bow to the almighty dollar. I'm so glad that we did not buy in Carpenteria when we thought living by the beach and smelling the ocean air would be nirvana. Now, the folks there get to smell the weed nearly every day, and visitors/tourists constantly comment and ask "what is that skunk smell?" The expected monies are not coming in, and basically the quality of life continues to deteriorate. I worked in Carp for about four years back in the 90s and a couple years in 2004-6. Carp basically traded their wonderful town for a couple pieces of silver to provide the products craved so much by the weed-addicted who say they are not addicted. Have a bowl...go for a walk. Go for a walk...have a bowl. Go to the park...have a bowl. Concert....bowl. Hiking....bowl. Bowl...bike ride. Gummies....walk downtown. Bowl....movies. Okay, not addiction....whatevers.

Baby, you both exaggerate and do not take location into account. No beachfront homes or businesses are complaining. If you worked there, you should have some familiarity with where the grows are located.
And talk about behaviors and addiction? Just laughable.

What's the stink about? Where's the #'s? I'd like to see the breakdown (no pie charts please), no names need to be given for the "contestants" [except for Sandy W. as a "Reference point!], just the specifics as to what the H/L values as well as the winning smellest. Got to love the the scientific approach "no gum chewing" prior to... (apparently a wad of chew is ok?)

i prefer the smell of fresh weed over the smell of onions, broccoli, cabbage....any day. why arent they crying about the freeway noise? car emmisions? bi planes spraying? all of that takes place in Carp too. Some of the words i've heard from carp folks just make me belly laugh. The smell is toxic and causes my throat to hurt. LOL....that was my favorite. Keep clutching your pearls. This isn't going away.

the guy is a total dikwad.

Did you even read the article

"The prevailing viewpoint in

You didn't see it reported

Fun fact on that topic Chip,