The Santa Barbara County District Attorney's Office has dropped charges for a Santa Ynez homicide due to new information.

"Due to new information regarding Terry Wilson’s cause of death, the People cannot proceed with the homicide case against Rylen Quinn Svane Morris at this time.  Therefore, the People have dismissed the First Amended Complaint in case 22CR07277," Dudley's office stated.

No further information was provided in the District Attorney's statement, although Svane-Morris' defense attorney's claimed he was invited into the home and Wilson had serious health issues with his heart.

On October 8, the Santa Barbara County Sheriff's Office stated they responded to the1000-block of Jason Way for an unknown emergency. Wilson was declared deceased at the scene. 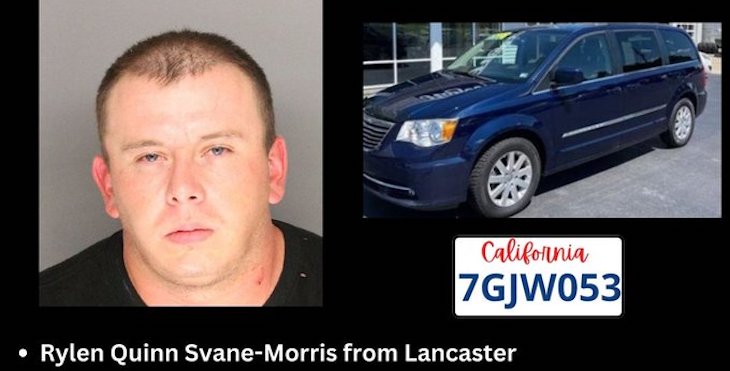 The suspect, later identified as Svane-Morris, fled the scene prior to the deputies' arrival and public assistance was requested to find him. He was described as armed and dangerous, possibly driving a stolen blue 2014 Chrysler Town & Country minivan.

On October 12, the Sheriff's Office announced Svane-Morris was arrested in Santa Cruz for the murder of Wilson. He was booked at the Northern Branch Jail for a no-bail homicide warrant with the potential of additional charges.

[Ed Note: This article has been updated with additional information]

"Due to new information - [the DA] cannot proceed with the homicide case against Rylen Quinn Svane Morris at this time." Did the SO/DA find another suspect or is there simply not enough evidence to prosecute "at this time?" There had to have been sufficient PC to obtain the arrest warrant, what happened? If this complaint against Svane was the First Amended, what was the initial complaint and had he been in possession of the stolen car? Not that it matters much but it would be interesting to know if he's charged with any crime and/or remains in custody.

Since the new information was regarding the cause of death, it sounds like they may have discovered it wasn't a homicide after all.

After reading the comments by Morris' attorney, it appears the new information would be a text(s) from the victim's daughter to Morris indicating she invited Morris into the residence. In addition to other information provided, the victim reportedly "went after" the suspect "armed with a crow bar." The victim had a preexisting heart condition and recently checked out of a hospital against medical advice. It appears someone may not have been honest with the cops. The suspect (Morris) was arrested on Oct 12. It seems this "new information" would have been learned shortly after his arrest. If this is accurate, why wait until Dec 2 to release the suspect? Absent any other information, it appears the suspect may have a civil case.

Get away with murder and mayhem- Come to CA! If a homeowner shoots a perp on their property due to a viable threat, you can bet the D.A. will go after you...

COAST - If you have facts proving he committed this murder, please inform the DA, as they dropped the case for LACK OF FACTS showing he did.

@Coast, did you read? They dropped the case because the decedent had indeed NOT been struck - ever. There were no marks on his body. The suspect did NOT break in to the home, he was invited by the decedent's daughter. She waited hours to call the police. The decedent died of a heart attack. But please, continue your irrelevant rant.

Coast: The early 19th century called, they want their justice system back.

Seabird - was that in another article? I found it curious that she did this interview 7 days after her dad died. http://www.santamariasun.com/news/21550/santa-ynez-valley-homicide-victims-family-demands-justice/

The victim didn't have any signs of trauma. Hopefully they have evidence against Terry Wilson's daughter.

Innocent people always steal cars and run from a crime scean. I pray another person doesn’t cross this guy.

How insensitive can you be? The man died. Not the time to try and be cute Nick save it for your longwinded poetry.

9:44 am - I thought the same thing. Some of the writers for the Independent really use a poor choice of words!

If Svane-Morris did not kill the older man, I am glad he is not being charged for that.
Here are reasons why Svane-Morris might have decided to run from the police"
"on October 4, Svane-Morris had been arrested on two felony charges for allegedly stealing a 1960 vintage motorcycle and for taking possession of a stolen Kia Optima. On October 3, he was also arrested by Sheriff’s deputies for assaulting the ex-girlfriend, Jennie Wilson of Santa Ynez, who claimed he tried to strangle her. He was not charged with attempting to strangle Wilson, however, because according to prosecuting attorney Laura Clinton, there was not sufficient evidence to prove the abuse allegations beyond a reasonable doubt."

I'm assuming (or ASSuming, hat tip to sacjon) that Mr. Svane-Morris has a list of problems with the law that is longer than the three problems listed above.

So he ran.
This incident shows why you don't want your 14 year old to put themselves in play. Svane-Morris almost went down for a murder he did not commit and was in jail with the toughest group in County because he'd gotten into previous trouble with the same family and same address. This time all he was doing was using the shower and look at what happened
Woman tells police you tried to strangle her, the woman's dad hates you, but you go back to the house? $50 bet that the first place Svane-Morris went after release was the house in Santa Ynez.
The last chapter of this tragic saga is pending

The statement to which you

Show me tangible proof of the

How many times are you going

Sac, does “DF” stand for what

Questions part II - why is

Interesting that according to

VOICE - yes or no, final

"You are also wrong in

Well your words are written