Spanish and Mixteco interpretation will be provided. Register here http://bit.ly/8mW4hd

The monkeypox virus is part of the same family of viruses as the virus that causes smallpox. It is a public health concern because the illness is similar to smallpox and can be spread from infected humans, animals, and materials contaminated with the virus. Although, Monkeypox is less transmissible and usually less severe than smallpox.

There are 5 confirmed cases of monkeypox in Santa Barbara County as of Tuesday, reports the county's Public Health Department. There are 2,356 cases statewide with the majority, 853, in nearby Los Angeles County.

Symptoms of Monkeypox usually begin one to two weeks after infection. They ususally include fever, aches, chills, exhaustion, respiratory symptoms, and a rash that can look like pimples or blisters. People with Monkeypox may experience all or only a few of these symptoms, but most will develop a rash or sores.

Monkeypox can spread from the time symptoms start until all sores have healed and a fresh layer of skin has formed. This can take several weeks. It spreads primarily through close, initmate contact with an infected person, but it can also spread by touching items or clothing that previously touched the infectious rash or bodily fluids.

Vaccines are available but very limited. Santa Barbara County has received 260 doses that will become available to eligible residents.

The current situation is rapidly evolving, but if you have any symptoms of Monkeypox, talk to your healthcare provider, even if you don’t think you had contact with someone who has Monkeypox. The Center for Disease Control (CDC) is urging healthcare providers in the United States to be alert for patients with rash illnesses consistent with Monkeypox. 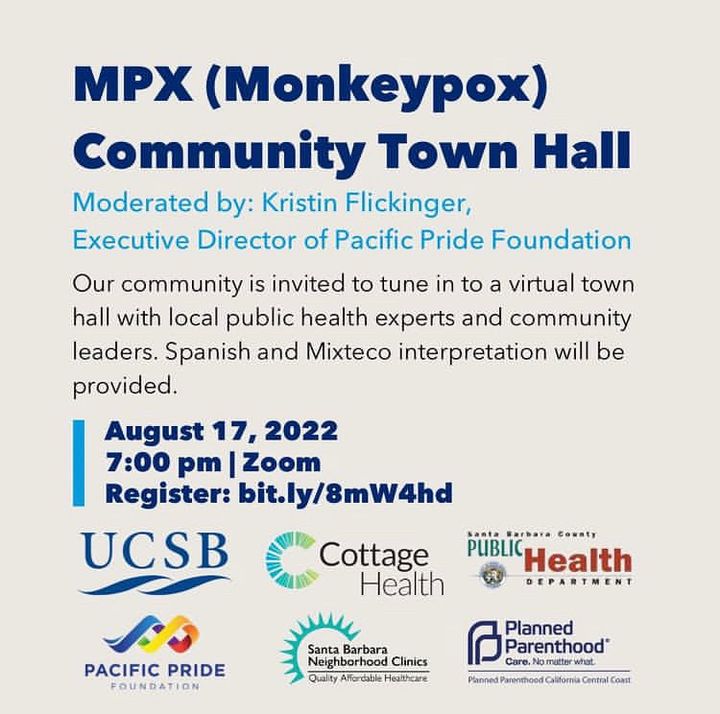 Important read on Monkey Pox. They are not doing a good job of giving people the most common risk factors so all groups do not need to take quite the same precautions https://www.nbcnews.com/health/health-news/monkeypox-spreads-experts-clear-misinformation-rcna42526?fbclid=IwAR0YIMvegEhmoDEnJKRGTL7fXGynrLRVGSdmcVzUS1DysO6Wq0oFcoqmwK4

"The patient's "primary risk factor was close, nonsexual contact with numerous unknown persons at a crowded outdoor event," the researchers wrote, and the case "highlights the potential for spread at such gatherings, which may have implications for epidemic control."
The event he attended in the UK was not a rave and was not attended specifically or mostly by persons identifying as gay or bisexual, according to the researchers. While many attendees wore tank tops and shorts, he wore pants and a short-sleeve top. He did not notice anyone with skin lesions or who seemed ill, and he attended a few other similar events over the next four days."
https://www.cnn.com/2022/08/17/health/monkeypox-case-nonsexual-transmission/index.html

I can see why colleges are concerned about the disease.

When the WHO and CDC says 95% of cases are in a certain demographic, there are still 5% outside the demographic, like the single case you linked. Also a real possibility, the patient in that single case example may have some infidelity issues he didn't want a significant other finding out about. But as covid has shown, even a risk of less than 1% can freak a lot of people out. May want to let them your collogues know no one has died from Moneypox outside of 9 people in Africa.

I wouldn’t draw any conclusions from a single case - the reporting party may, or may not, have given accurate information. More importantly, the WHO and CDC stated that 95 - 99% of monkeypox cases resulted from men having sex with men. That seems to indicate a clear target for preventative measures like vaccination and education.

Covid had a clear target for preventive measures, vaccination, etc. and that went right out the window. Remember when they called it a "Pandemic of the Unvaccinated" and blamed the unvaccinated for spreading covid and creating new variants? The same ones that threatened, shammed, ostracized those that flaunted or even questioned the covid restrictions no matter how asinine (like closing beaches)? I DO! I'm willing to bet the same people won't say a peep about having the demographic/activity where 95% of the cases are coming from adjust their behavior in anyway, you know, like "monogamy for two weeks to slow the spread".

If monogamy is too much to ask they should setup up "pods" like many of us had to do with our children for over a year.

Are "them your collogues" colleagues or colleges?

A doctor posted a pic on Twitter of a guy on a crowded Metro train in Madrid, in shorts, standing, with his legs touching a woman seated, who was wearing a skirt. The guy's leg was totally engulfed in Monkeypox. The doc questioned him - doesn't he know he can spread it by contact? The guy with monkeypox said his doctor said no problem, just wear a mask.
This thing is going to be widespread, people.

Make fun of the officers,