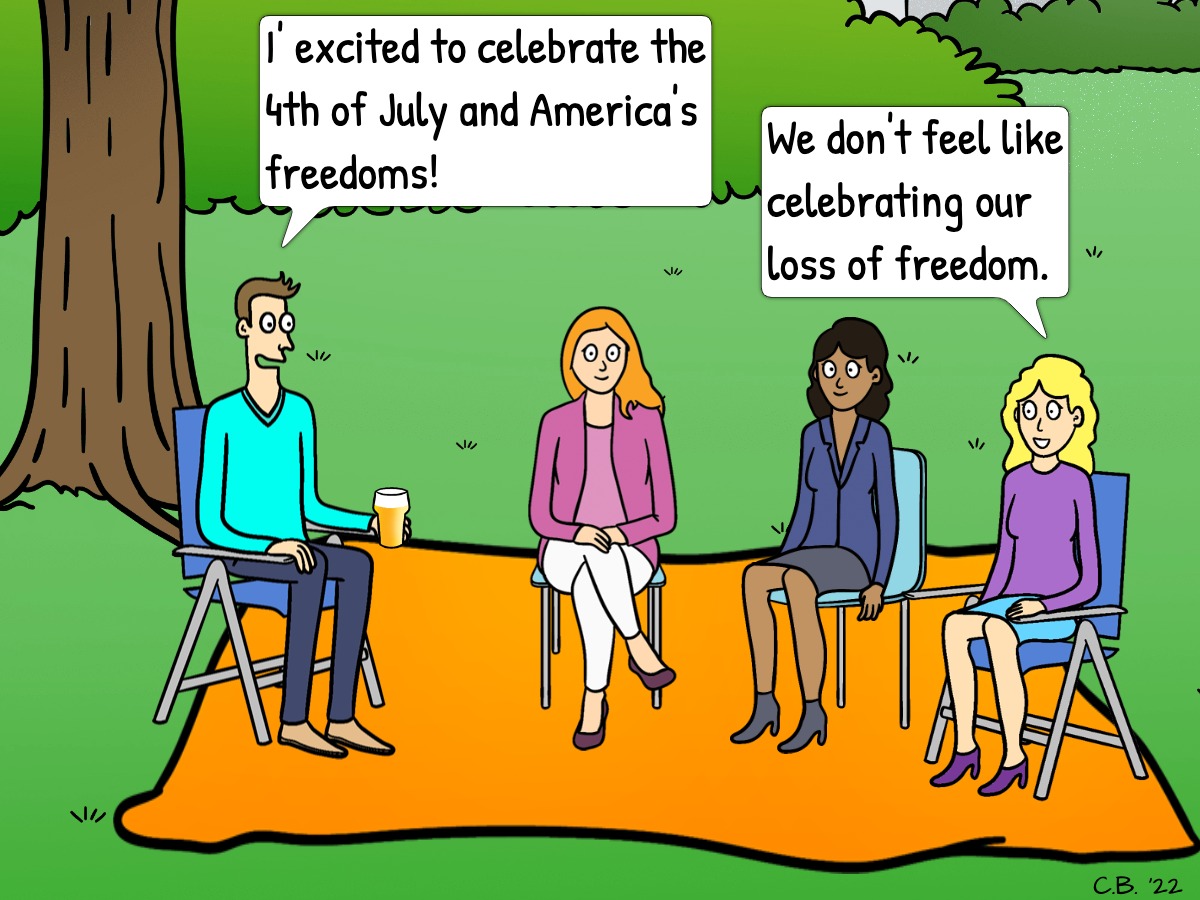 I hate the constant arguments and anti-social commentary we’re seeing here. I like that we all can debate points but most of these cartoons are just provoking unproductive me vs. you hateful computer “dialogue” of you know what I mean. I think it’s intended to be polarizing.

BASIC - which is it? Truth hurts or you anti-First Amendment now?

Can't even enjoy a 4th of July parade without a right wing shooter. "While Mr. Crimo's social media is relatively blank, he has "liked" a few tweets that indicate he may have political leanings to the right." Of course he leaned to "the right".

Oops that's Billion, with a B.

Does waving too many American Flags make you a patriot? I protested the War in Viet Nam because is was immoral and horrible. I considered myself to be a patriot and I'm still a Patriot. I have an American flag waving in front of my house today, but I want our planet to survive. I'm an earthling first, then an American. How can Trump pretend to be patriot and try to steal our democracy? How can Trump set up his social media network and call it Truth. Everyone knows it's LIES, LIES, LIES. He is the liar swamp dweller who took us all to be suckers and losers while he raised a quarter of a $Million from his believers to LIE, LIE, LIE. I believe in the America of Truth, Justice and the American Way, based on Truth, Justice and Science... Get a grip.

I don't think it's gullibility ... rather moral corruption, a lack of scruples, a deep fundamental dishonesty, so he cherry picks madly and declares an objective fact check "partisan" without even reading it and refuting none of it (especially the GOP Senate's own report that found collusion), while absurdly referring to Durham who was hand-picked by Bill Barr for partisan purposes but still came up empty, and refers to Mueller whose report he's never set eyes on and knows nothing about other than Barr's misrepresentation of its findings that even the very cautious regulation-bound Mueller was compelled to call out. It's not gullibility, it's transparently dishonest despicable deplorable behavior and the only people who side with him are the same. He lies by rote, which is why I don't engage in extensive back-and-forths with him like some silly people here; I occasionally point out his more egregious lies and then move on. Of course he will continue to tell the lie--directly channeling Trump--that there was a "Russian collusion hoax" ... it's what fundamentally bad people do.

LOL - You cant even spell his name! Obviously you never read the report. Instead, you just repeat what your talk show hosts, charlatans and demagogues tell you.
-
-
-
Imagine being this gullible? Imagine spending your life trying to convince random strangers on the internet you're smart and educated but you never actually read or studied the very thing you're tying to disprove? Yeah, that's the path... Clown.

The DOJ Durham and Muller investigations disagree with you and that partisan ‘fact check’.

"The amount of misinformation and propaganda you continually post is astounding. Do you think if you keep repeating it over and over it will be true?"

We oppose the right wing not because we are hateful people, but because they are.

Chief liar here--their voice even--can't understand why he supports himself.

GT: Ginsberg (RIP) certainly knew how to stir things up and a lot of people admire him for a number of reasons. As for myself, his association, support, and membership with NAMBLA is what bothered me. I take it that you are okay that he was a card-carrying member of NAMBLA and that does not bother you and others, but for me.....er, uhhhh....just a little to "icky" for me ad no bueno. To be fair though, late in his life he stted that he was wrong to be associated with NAMBLA for all of those years, and flatly denied that he was a "chickenhawk" (gay male with an insatiable desire for under-age boys).

VOICE supports the most neo-nazi far right garbage and always has. Always defending the proud boys, Trump, and the intrinsically most evil garbage of this world. but you do you. See you on the field.

"All are equally deplorable" yet only one promotes the lie of a rigged election and urged supporters (that he knew was armed) on to the capitol. Glad to see you stopped posting anonymous today.

You can't understand yourself? That makes your commentary a bit more understandable.

Such a hypocrite to scream LIES, LIES, LIES at only one political party, president or politician. All are equally deplorable on this front, which for the life of me I can’t understand why people continue to support the liars that want to give themselves more power and control over our lives.

I think it's important to point out that most other first world countries have national laws concerning abortion that would be considered pretty restrictive by American pro-abortion activists.

So please, what other "first world countries" are more restrictive than the US (which now allows the criminalization of abortions at any stage with no exceptions for rape, incest, risk to the mother, etc)?

Dude thinks it's important to point out that American women are complaining too much in his view.

Nope. Not the case. We are, especially now, much more restrictive.

To Salsaguy: "arguable [sic] the best country to live in" You don't get around much, do you? "Do we have a blemished, troubled past" Boy you sure know how to whitewash things. Try using that terminology when you have your first conversation with a Black person about their "troubled past". Blemished, your white hood is showing.

How is displaying our country's flag interpreted as "HATEFUL"...? This is what I am referring to as freedoms being eroded by a whacked out "progressive" thought /mind speak... George Owell's 1984 comes to mind. Across College /University campuses, it is forbidden to think or verbally suggest any alternative to the progressives POV. There is no acceptance of conservative values or beliefs on these once "free thought" higher educational platforms... The indoctrination of our students begins in grade school and continues through college to think a certain way and follow the " societial norms" OR BE CANCELLED. That is how are freedoms are eroding.

Well, Coastwatch, if you think about it, and I sort of doubt you do, all flags are inherently hateful. Flags originated as markings to be worn to sort out who you were supposed to murder on the battlefield. They are by their very nature, separatist, divisive, exclusionary, anti-human, as they encourage and demand that people identify with one group over all others, which is obviously something that creates violence.

George Orwell was a socialist (and progressive). He was not your friend or ally.

" The indoctrination of our students begins in grade school " that is a statement from someone that is truly lost. In Florida teachers are ripping down rainbows from their classrooms for fear of prosecution.

Fascists always bedeck themselves with flags and symbols to sway the simple-minded who don't look behind the displays.

Some criminal acts are intolerable.

Brought to you by the party of tolerance…..

This is a time to celebrate what arguable the best country to live in. Are we perfect no, but who is? Do we have a blemished troubled past, yes we do. Tell me what other country you would want to live in. So don’t celebrate the 4 th, no one will miss you not being there. Speaking of the USSC, it is not a legislative body. Congress makes the laws. The Supremes rightly turned the action on abortion back to the legislatures, be they state or federal. It took a court decision to maybe get the Congress off their asses and pass legislation making abortion a right. Do you think they’ll do that? They have had years to act but they haven’t, so why now? They are more concerned about reelection and keeping their jobs than in passing controversial legislation. Thank God they were not around in 1776 or we would have still been under the rule of the crown. Happy 4th

"Are we perfect no, but who is?" - Well, those countries that don't have neo-nazis and other miscreants running around with legally purchased semi-auto military rifles and that allow women to chose what happens to their own bodies are bit better off than us, I'd say.

"Tell me what other country you would want to live in. " - See the answer above. Any one of those.

"The Supremes rightly turned the action on abortion back to the legislatures, be they state or federal." - So, question for you now - do you truly believe a woman's right to choose should not be a constitutionally protected right?

Yeah..... maybe some people have a different idea of the "land of the free" than you do.

Personally I really dislike having to maneuver around the walking dead of mentally ill, drug addicted, and economically destroyed that clog our city streets.

I've been many places in the world with less money and resources and very few homeless.

This country is divided by hatred. So why celebrate the 4th? Americans against Americans.

VODespicableness complains that he is despised.

"These days the hate it only coming from one side, the other half learned how to live and let live."

Lies as always. I could talk about "Rally for the Right" shouting "Jews will not replace us" and running over Heather Heyer, or Robert Crimo III murdering parade goers, or thousands upon thousands of examples of right wing hate, but what's the point? Evil people will continue to deny it.

"In reading comments on EdHat I only see hate coming from one side."

Yes, you usually have your blinders on.

In reading comments on EdHat I only see hate coming from one side.

VOICE - "These days the hate is [sic] only coming from one side," ---- good lord man, you keep doubling down, don't you? YOU ARE LYING. Have some darn dignity dude. You are clearly delusional to think there is NO, ZERO, NONE hate coming from the right. How do you explain the blatant acts of racism by your former president? The policies enacted to prohibit discussion of LGBQT issues? Right-wing domestic terrorists? Like what the fudge planet are you even on? Sure, there's hate on the left. I hate racists and people who defend them. But to say there is ZERO hate from the right is just a freaking JOKE and a LIE.

VOICE - "but it’s never reciprocated by [sic] the more conservative posters." - Voice oh VOICE.... how many times do I have to tell you to avoid absolutes? Your comment is now a lie. It's meant to deceive.

SBLOCAL - every single comment he makes uses "libtard" at least once.

Tried searching for more examples, but they're in the penalty box so it's not so easy.

VOICE at 4:32 - "spew hate, condescension and insults" - aside from MarcelK, what comments are you talking about? And are you seriously saying you never spew "condescension?" LOL! That's the essence of nearly every single comment you type!

GT - haha thanks! Nope, I just make it a point not to be on the computer during the weekend! I needed some outside time lol!

Sacjon must be on vacation so I'll regulate.... That is probably the dumbest statement I've ever read on this forum.

Quite the fitting name Karma.

Quite the story - Rainy where

Tino's on Carrillo does 6ft

Hi Karma! There are no City

KARMASB - It baffles me that

You're "not trying to be mean