The Santa Barbara Police Department is requesting the assistance of the public in locating the whereabouts of a subject who is wanted for attempted murder and several felony firearms violations.

On Sunday, January 23, 2022, at 0200 hours, Alexander Raul Garcia, a 36-year-old Santa Barbara resident, was involved in an argument with another individual in the 500 block of Casitas Road, Santa Barbara. During the argument, Garcia displayed a semi-automatic firearm, raised the loaded handgun towards the victim and fired. Garcia then fled the area immediately after.

Garcia’s whereabouts are currently unknown. He should be considered armed and dangerous. Do not attempt to contact this subject if seen, and call 9-1-1 immediately.

Thank you for your assistance in this matter. 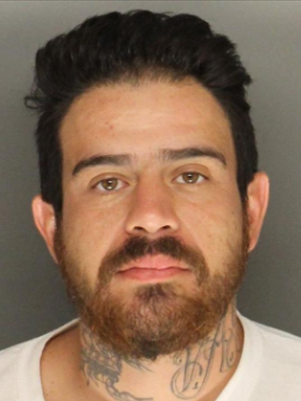 Looks like a real friendly guy... If he shaves nobody will know who he is?

Definitely looks dangerous to me.

I’m sure anyone with tattoos looks dangerous to you

LOL--probably the smirking mug shot also has something to do with it.

how does he look "dangerous"? LOL because he has a beard and ink? uh...that's pretty much every other guy in town....

Zerohawk, does every other guy in town with a beard and tattoos also have an FU mugshot circulating?

No doubt an oversight by the person writing this article. But, what is a "non-urgent" notification to the cops if the location of an attempted murder suspect, armed & dangerous is known. Hoping he is captured without incident.

Seeing as that statement comes after "...if seen, [and] call 9-1-1 immediately"
I imagine it means if a caller has info about where he may have lived or stayed or might be found, without having actually seen him.

02:22 - IMO, all information regarding a suspect of this type, whether we believe it be old or not is "urgent." Information should be immediately reported. Let the cops determine whether or not the information has any value in their investigation.

DOULIE, 911 does not employ infinite operators. Info about where this dude may have lived in the past etc is NOT more important than an actual, currently-occurring emergency. Don't tie up on 911 over non urgent info.

10:30AM - I did not suggest anyone call 911, only that information should be reported immediately. The PD has a business line that can be used. I will guess all information will get to the investigating detectives quickly.

Take note of the end statement that "Photos provided has been approved for public dissemination by the Chief of Police"
This is due to a new law.

"Law enforcement agencies are now prohibited from
posting on social media the mug shots of most people
arrested and accused of nonviolent crimes."

(Yes, I realize this was a violent crime, just trying to pass on some info, and thinking this law is why there's a message about approval for the photo.)

That's great! Of course situations like this are and should be an exception. I've said many times on here, you cannot claim to have a functioning justice system while also promoting prolonged judgment by society. Either people are found guilty and serve their time/probation/community service and earn back their place in society, or we revamp the system - not publicly shame folks presumed innocent and/or folks proven to be guilty when "justice has been served". California has way too many laws, but this one is a good one.

..."During the argument, Garcia displayed a semi-automatic firearm, raised the loaded handgun towards the victim and fired. Garcia then fled the area immediately after."

Alexander and I worked at the same company for a few years up until Covid began. He was kind, respectful, and very funny. It is sad to see his life has taken this turn.

ladyjane, sad i agree. im sure there is a lot more to the story. he'll have to answer though, for his mistakes, and hopefully will straighten his life out again.

As kind and funny and even respectful as he may **have** been in the past, no logical, sane person that doesn't have some severe emotional and mental deficits would pull out, point a loaded gun, and fire the weapon at a person over something as trivial as an argument. His actions are the definition of someone who should be incarcerated, and by his actions is a real danger to the rest of us.

nah, you don't know anything aside of what is printed above. were you there? did you hear and witness everything? nope. and how do you know that the guys that he shot at didn't provoke it by pulling a weapon on him first then reporting a false narrative...and you think that sort of thing doesn't happen? it happens every day dude.

Zero - It appears in your 04:27 post you are tending to defend Garcia with your comments by offering excuses/reasons as to why, regarding "the guys that he shot at - ." But, in your 09:48 comments to "ladyjane" it appears you believe he is responsible, i.e., "he'll have to answer though, for his mistakes." Which one is it? Bottom line, you don't know any more than anyone else, like the person you chastised at 04:27.

How tall is he?

"Maybe if I get some neck tattoos, no one will mess with me and think i'm hard"...man-child decides to settle an argument shooting at someone, rather than use some common sense. Snowflake's world get's turned upside down when someone actually responds and isn't scared or threatened by him, and realizes the budget tattoos he got might have been a mistake.

Xpander wtf are you even talking about? You have ink? No? Thought so. What does ink on his skin have to do with anything? That's just..weird and outdated thinking. If you haven't been outside in a long time, you'll notice a lot of people have ink and facial hair too. I have a neck tat, several. In fact I have over 30 pieces and I hold a good job at a reputable local company. I also work with law enforcement and K9 handling, i've raised three kids and work with kids that have no dads...but yeah since I have ink on my neck I must be a loser. According to you in your little tiny narrow world.

I have more tattoos than you can see, and take offense to the generalization that tattoo'd people are bad.

I think he was referring to *budget* aka Jailhouse tattoos, so unless your on that bandwagon your comment shall be disregarded.

Zerohawk - your assumptions are hilarious. Sounds like you are defending this lovely human being. I will wager I have many more tattoos than you do - But this isn't a d***-measuring contest is it? I'm happy you have some neck tattoos. Good for you. Did you want a medal for it? Wow, 30 pieces. Try a body suit kook. Most people who have tattoos, btw, don't call it "ink". We simply say tattoos. Your comment "you have ink? no? thought so?" LOL is pretty comical. I never said anything about having a neck tattoo and it equating to being a loser. I was making a point about his budget looking tattoos...I'm sorry for you if yours look anything like his. In this case, though, someone who pulls a gun on someone over an argument, no matter what it was about, it as complete loser. If it was a legit self-defense shooting, you wouldn't be running and hiding. You'd man up and take whatever consequences you may get. False narrative? I have to stop now, i'm laughing way too hard this morning.

To Those With Tattoos - I'm curious about what prompted you to get it or them?

It's different for everyone. For me it was spending a lot of time in South East Asia while I was young and seeing how the people and monks in Thailand and (Khmer) Cambodia keep the tattooing tradition alive. Went from starting out with a few old school khmer and sak yant hand-poked tattoos to an almost complete bodysuit. In this case it's more spiritual, but everybody gets them for different reasons (including neck tattoos! lol )

I'm told it's next door to

Thanks. I'd just been looking

Every time I pass by those

Someone should submit the

Oh barf. Really, are we that