The advisories were issued after an undersea volcano erupted Saturday near the nation of Tonga in the Pacific. A tsunami warning was in effect for all of the archipelago, according to the Tonga Meteorological Services, and 2.7 foot-waves were detected, Pacific Tsunami Warning Center data showed, according to The Associated Press.

The National Tsunami Warning Center has issued a Tsunami Advisory for the Santa Barbara County coast. This notification is an ADVISORY ONLY – YOU DO NOT NEED TO EVACUATE.

A Tsunami Advisory means that a tsunami is expected or occurring and may produce strong currents or waves dangerous to those in or near the immediate coastline.

The National Weather Service said it's best to maintain situational awareness at beaches, harbors, marinas. Riptides are likely. This threat may continue for several hours after the arrival of the initial wave. Widespread flooding is not expected.

A tsunami is a series of successive surges of water that may be only a few feet in height yet still contain a massive amount of energy and can affect bays and inlets otherwise protected from ocean waves.

The National Weather Service also stated, "a -0.59 residual was recently recorded at Santa Barbara Harbor. These plots allow you to see the height of the #Tsunami wave (the residual) which is the difference between the predicted tide and the observed water level." 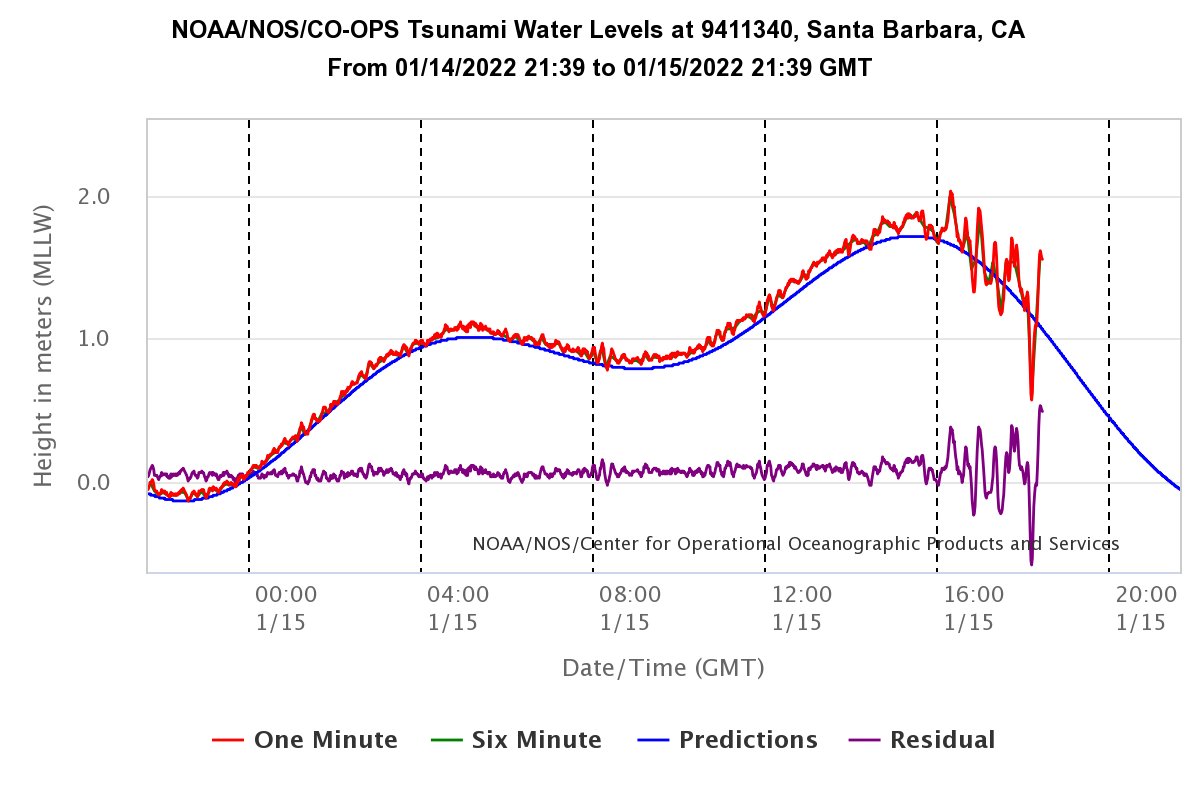 Tsunami Advisory is still in effect for Santa Barbara County and will remain so until at least 3 hours after tsunami surges subside. The Office of Emergency Management urges residents to avoid the beach and coastal areas as strong currents continue and damage to harbors and piers could occur.

In other parts of California, flooding was reported near the Santa Cruz Harbor, and some residents were evacuated. Officials also said over 100 people evacuated the Berkeley Marina, CBS SF Bay Area reports.

The California Governor's Office of Emergency Services said tsunami heights were expected to be 1-2 feet, based on what was seen in Hawaii. 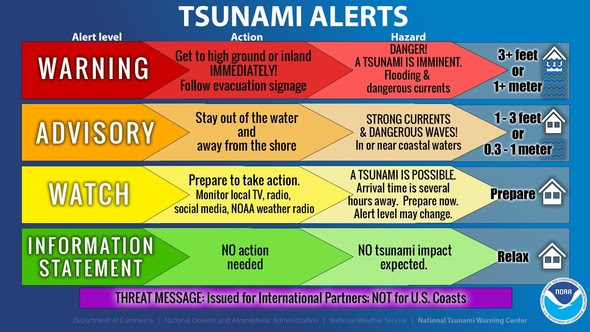 A look at high tide at Butterfly Beach following Tsunami Advisory for CA Coast, including SB County South Coast. While there is no concern of significant inundation, please avoid beaches. High tide & strong rip may continue for several hours after the initial wave this morning. pic.twitter.com/I7Y8Knl7Ik

Impressive. If that tide gage is correct, the first wave hit just after 8AM local time (1600 GMT) and the perturbations continued for at least 2 hours. Not surprising since SB faces directly towards Tonga, even though the islands blocked a lot of the energy from that direction.

Anyone know if this will affect the Rincon Classic, scheduled for today and tomorrow?

According to the news they delayed it for an hour or so but it went on all day and today (Sunday) also.

It was also high tide at the same time.
If it had been bigger, it would have been impressive,

They lost a couple of dock fingers in Ventura Harbor and there was lots of current throughout the harbor and it was still making a whirlpool effect just inside the harbor at 3:00 today.

Interesting. About 50 years ago, I was riding on a sailboat entering the harbor, just as the Harbor Patrol was recovering the body of a surfer who had been sucked under by a whirlpool there and drowned about a week before.

Water was really moving through the harbor. Wild.

I remember that incident.
I was about 10 trs.old and we didn't know to be scared.
I remember surfing at College Point during that time.
Of course we didn't know what was going on until later.
Waves were intense,close together,but not big at all,like shoulder high.

The atmospheric pressure wave emanating from the eruption was measured by a friend of mine to be traveling at an average of about 700 mph. That's not quite the speed of sound at temps above freezing. He used his own PurpleAir monitor plus others in his area to determine this .... https://twitter.com/SeanTrek/status/1482572294832619524

Any surfer who "went out to catch Tsunami waves" knows nothing about Tsunamis. Tsunami waves are likely not rideable, they don't break like a normal wave, they tend to be a wall of water that pushes, the wave pictured is not a "Tsunami", it's just a regular wave.

The Pacific is a sloshing!

The 4K render at Youtube is a little easier to watch .... https://www.youtube.com/watch?v=u-OfbNwWjDc

This devastating eruption and resulting tsunami should serve as a warning that we need to dramatically speed up our efforts to reduce carbon emissions. The rising sea levels and ocean temperatures caused by global warming will increase the frequency and severity of these types of events in the years ahead unless we take drastic action now.

Chip, are you that ignorant? It was a volcanic eruption....you science deniers are so.....limited in your thinking. Volcanoes do not erupt due to rising sea levels and ocean temps...sad I have to explain this to an adult. The rising sea levels are a massive issue and there are 4 nations right now about to lose everything, meaning their lands will be submerged. Look it up. I have friends that live in one of those island nations. They can back this up. One massive wave and they are all up in trees as there is no high ground.
Back to the volcano. The volcano eruption is in Tonga, an island nation southeast of Fiji. There is a new island forming and this is how islands are born...
I could suggest some books for you to read on the topic. A few of them are science text books from the 1970s, 80s, 90s. Maybe you missed those classes entirely?

Unless Chip was being sarcastic.
Yes, of course it's silly bringing up climate change/anthropogenic warming in a discussion of a volcanic eruption and its sequala! Made me chuckle though.

If you go to “google scholar” and search for the influence of climate change on volcanic activity you will find countless papers investigating how volcanic events change the climate, and no papers addressing how climate change influences volcanic events. I find this shocking! To show how ridiculous that is, imagine if you searched for how changes in atmospheric CO2 concentration influence ocean temperature and all the papers that came up described how changing ocean temperatures drive changes in atmospheric CO2. That would be crazy, right? Does anyone really believe that the sun, or some factor unrelated to humans, could cause a change in global temperatures? Does anyone honestly think that the amount of CO2 that is absorbed in the ocean could change as a function of temperature and that variation of the intensity of solar radiation could actually be the primary driver of atmospheric CO2 concentration rather than humans? Only a science denier would even consider such a silly idea. So why is our understanding of geological activity so backwards? Does anyone really believe that natural geologic activity within the earth could be driven by a gravitational interaction with the moon, other planets, and factors unrelated to human activity, and that such activity could in turn be a leading driver of climate change? Nonsense! Only a denier would claim that climate change is caused by the sun or gravitational interactions with other planets. I predict that the science will catch up to me within 10 years and new scholarly work will prove once and for all that climate change (human activity) is to blame for increasing volcanic activity and earthquakes. Don’t forget, it wasn’t that long ago that a severe storm, a record snowfall, a forest fire, and even a tornado was referred to as an “act of god.” Amazingly, this misleading term is still used in many legal contexts despite the science having proved that humans are responsible for such events. It takes time, but science will prove me correct.

Seems it will take a very, very long time to find out if there is an effect. I'm glad I searched for info on your idea.

2013 LiveScience article:
"The rapid rise in sea levels could cause a dramatic increase in volcanic eruptions, according to a new study.
The study, published in the journal Geology, found that during periods of rapid climate change over the last million years, the rapid melting of continental glaciers and the resulting sea-level rise eventually increased volcanic eruptions as much as fold [sic].
But even if anthropogenic, or human-caused, climate change impacts volcanic eruptions, people wouldn't see the effect in this lifetime, because the volcanic activity doesn't occur immediately after the climate change, Jegen said.
"We predict there's a time lag of about 2,500 years," Jegen said. "So even if we change the climate, you wouldn't really expect anything to happen in the next few thousand years."
https://www.livescience.com/25936-climate-change-causes-volcanism.html

2017:
"A warming planet due to human-induced climate change is likely to contribute to an increase in volcanic activity, according to a recent study in the journal Geology. [link to article is dead.]
While a relationship between climate and volcanism might seem counterintuitive, it turns out that pressure exerted by thick glaciers on the Earth's crust — what geologists call "surface loading" — has an impact on the flow of magma below the surface."
https://www.npr.org/sections/thetwo-way/2017/12/22/572795936/climate-change-likely-to-increase-volcanic-eruptions-scientists-say

Chip, as usual, is a purveyor of nonsense, but in his occasional pitiful attempts at sarcasm, he will sometimes inadvertently utter a bit of truth.

Excellent find on those papers 1:07! The obligatory round of insults I experienced is to be expected when bringing up cutting edge scientific theories. Expect to see a lot of work linking earthquakes, eruptions, and other geologic activity to humans in the years ahead!

"Excellent find"?! I simply searched "does anthropogenic warming affect volcanoes."
*You* talked about Google Scholar, I wish you had cited sources for your assertions. I don't think the many decades of research behind these articles is really cutting edge, and volcanology understandably moves slowly -- they don't have many opportunities to study the phenomena compared to most other scientific fields.
My citing those articles doesn't mean I agree with you. Volcanoes will be a small worry compared to heat waves, crop failures, desertification and the lack of potable water.
But you raised a discussion, a bit of a ruckus, and had a little fun, so there's that.

Chip, note that I did not find or cite the papers. I cited general press news articles about them. Such articles are bound to be broad and try to make the science attention-grabbing. Read the news articles I cited and you'lll see what I mean.
There will not be much, if any, more study of plate tectonics, geology, glaciology and volcanology done unless there is funding for it. Or such funding is brought back up from what was probably lost during the last administration.

Pretty much a daily thing now

I don't have kids but support

I'm told it's next door to

Thanks. I'd just been looking

A humorous retort to a

Every time I pass by those