On October 8, the National Oceanic and Atmospheric Administration (NOAA) Ship Fairweather was traveling off of the Oxnard coast when a juvenile brown pelican collided with the superstructure of the ship. Suffering from head trauma and unable to fly, this pelican was transported to Santa Barbara Wildlife Care Network to receive life-saving treatment. After 46 days in care, it was successfully released back into the wild on November 24.

At approximately midnight on October 8, the Fairweather crew, led by Captain Jay Lomnicky, heard a large crash and discovered the juvenile pelican on the deck of the ship. While there were no obvious injuries that could be seen, the pelican seemed dazed and was unable to fly. Knowing that brown pelicans are protected under the Migratory Bird Treaty Act, the crew immediately began searching for help for this bird.

Santa Barbara Wildlife Care Network (SBWCN) was the closest wildlife rehabilitation center to the ship and agreed to help get this pelican into care. In addition to being 10 miles off the coast, the Fairweather was also working within an isolation bubble as a COVID-19 precaution, and could not have direct contact with anyone outside of the ship. With some coordination, a small boat was able to deliver the pelican to the Santa Barbara Harbor, and SBWCN brought it into care the very next day. 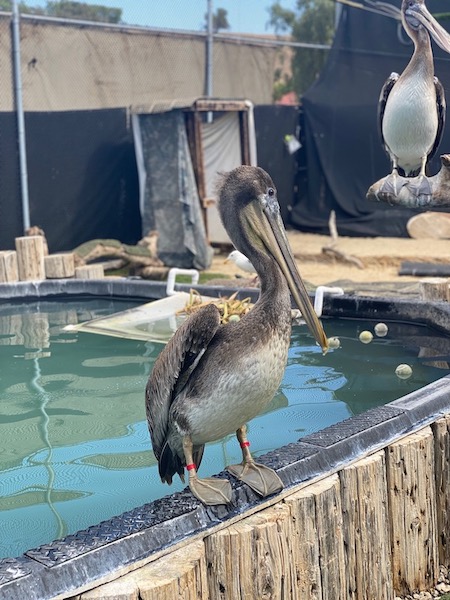 Once at the facility, SBWCN staff confirmed that this juvenile brown pelican was suffering from head trauma after colliding with the ship. It also had a small abscess on its toe, which is commonly caused by cactus thorns on the Channel Islands and easily treatable. The pelican spent the first few days under intensive care where staff closely monitored its condition and provided IV and oral fluids, medication, and food. After stabilizing, it was then strong enough to join the larger population of patients in SBWCN’s seabird pool, where it could have more room to fly and swim. After 46 days of care, this pelican made a full recovery. It was successfully released in Carpinteria on November 24.

"At sea, we do our best to prepare for many contingencies, but an injured pelican was a challenge that we could not anticipate,” said Captain Lomnicky. “Luckily, our partner agencies, including the U.S. Fish and Wildlife Service, California Department of Fish and Wildlife, Santa Barbara Harbormaster, and the Santa Barbara Wildlife Care Network, were quick to respond and provide us with critical guidance. I'm grateful that through a coordinated effort, Fairweather's crew was able to safely capture, transport, and get the pelican the care that it needed. My sincere thanks go out to everyone who helped give this story a happy ending."

“We’re so grateful that the Fairweather’s crew took the time to give this pelican a second chance at life,” said Ariana Katovich, Executive Director of SBWCN. “These are the types of stories that remind us how much teamwork is involved to help wild animals in distress. I am heartened that our community cares so deeply for wildlife.”

Brown pelicans are large seabirds that range anywhere from 8–10 pounds with a wingspan between 6.5–7.5 feet. They are common residents of the southern coasts of the United States, with ranges extending down to South America. They are known for plunge-diving into the ocean to catch their food – one of only two pelican species to do so. These social birds can be found congregating in large flocks almost year round. Populations reached dangerously low numbers in the 1960s due to pollution from the pesticide DDT, and the species was listed as endangered by U.S. Fish and Wildlife Service in 1972. Thanks to DDT regulations and conservation recovery efforts, the brown pelican has since been removed from the endangered species list.

Santa Barbara Wildlife Care Network (SBWCN) is a nonprofit organization that was founded in 1988. For over 30 years, SBWCN has served to rescue, rehabilitate, and return to the wild sick, injured, orphaned, and oil-impaired wildlife in Santa Barbara and Ventura Counties and to educate the public about living in harmony with wildlife. SBWCN takes care of over 4,000 patients per year, including small mammals, shorebirds, songbirds, raptors, and herptiles. The SBWCN Helpline is available everyday from 9 AM–5 PM for animal emergencies and wildlife advice: (805) 681-1080. Donations in support of this work can be made at www.sbwcn.org/donate.

There are so many pelicans - wouldn't it be better to spend it on the needy?

RUBAIYAT - Do you really think they took money from the poor to help a pelican?

I'd say that pelican was needy enough.

NOAA is a government agency that is bound to follow the Migratory Bird Treaty Act -- as noted in the article. I guess they didn't want to kill it by inaction. Plus, that's what people in these fields tend to do, as evidenced by the agencies involved.

fact. people that lack empathy towards animals AND humans are 1 click away from being either a complete sociopath or a psychopath or both. Look it up...

it would have been on any of us under the circumstances, meaning if you were on a boat and this happened, you would also have to work to save the animal. it doesn't matter if they are a federal, state, or local agency. law is law.

A wonderful bird is the pelican,
His bill will hold more than his belican,
He can take in his beak
Enough food for a week
But I'm damned if I see how the helican!

I was going to attribute the limerick to Ogden Nash, but today I learned:

"This well known Limerick is often misattributed to other famous poets such as Ogden Nash. Dixon Lanier Merritt (1879–1972) was an American poet, editor, historian and humorist"
Or C.M. Marshton. Or...
https://quoteinvestigator.com/2020/06/20/pelican/

Thank you, NOAA and Fairweather! And SBWCN and the volunteers and donors who make the care possible.

Just imagine: local hero June Taylor started the seabird pool, decades ago, in her own back yard! Talk about a lot of fish -- and work. Our community really is gifted by incredible volunteers in all fields.

Caring for those with whom we share this world is the highest embodiment of humanity. That's why we rescue injured animals, and wear masks and isolate in a pandemic. Thank you, NOAA and SBWCN.

When you make a donation of whatever size to the Wildlife Care Network, you'll be put on their e-mail list and get very entertaining and heart-warming stories!

I guess most of the boat

I agree, this is very sad. I

I can't even begin to imagine

Odds are it was not a random

This is all very sad, and

As a Westside parent, I'm

It was also on the westside