At 2:37 a.m. firefighters and water rescue teams responded to a call of two people on a makeshift boat unable to reach the shore. Three rescue boarders launched from Isla Vista with two watercrafts responded from Campus Point.

The men had a paddle and the sea was calm but the water temperatures were in the mid-50s and there were no wetsuits. The tide had pushed the men approximately 300 yards from shore before someone saw them and notified authorities.

There were no injuries but Eliason does not recommend re-creating this "nautical nonsense" and clarified that alcohol was not a factor. 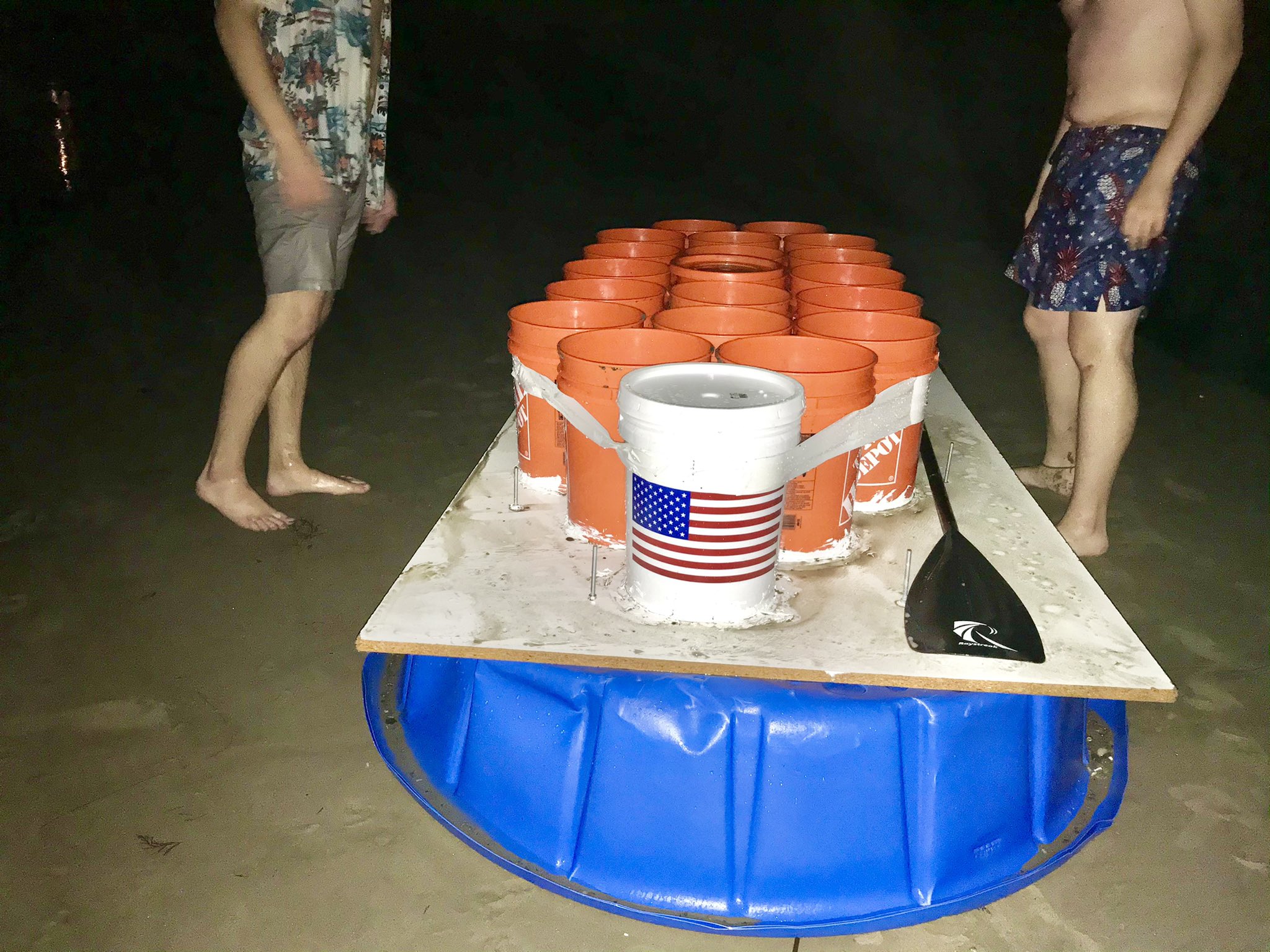 The should be Proud show their faces...

There's no limit to which testosterone will drive some people.

That was TCH talking.

You mean THC Because it's talking to me right now telling me I should have not eaten those Calflower sticks I'll pay for it later on.

I’m guessing the bucket side goes down and they used to have lids, and the seating area was in the pools.

I agree with Roger, would love to see faces. Although I very much appreciate the photos we did get.

UCSB is a top school, so even the non-engineers can put together a watercraft. Definitely be proud.

UCSB maybe is a top school but as these yahoos demonstrated they don't alway bring in the top students. My company only rarely hired UCSB grads.

very creative use of "eco-friendly" plastics... How do these Bozo's get accepted to a University?

What's really weird is for the money they paid for all that junk to make a "boat" they could have a very serviceable double kayak (which would last years) for around $500. Launching at night on our coast with the water temp we have now is really .... unreal.

Do it yourself pontoon boat. Wonder what time they launched that thing? No wetsuits? If these two are over 20 years old, I'll eat my hat.

The Wright Brothers only made it 120 ft.

An important part of adventurism is researching the history of the technology you wish to use.
There is this invention called "Google" or even better "Duck Duck Go"

There was alcohol involved in this at some point, even if they weren't drunk during the launch. 30 yrs ago, without cell phones, they could have died, right? They should charge for rescues like this.

Yes PITMIX they could have died. They also could have saved themselves. 30 years ago people were much more self reliant and had not yet been trained to depend on emergency services.

PIT - the authorities "clarified that alcohol was not a factor." Last line of the story. No, these weren't drunk idiots, they were just inquisitive young men trying to build a boat out of everyday materials.

Sac, when they say alcohol was not a factor, that means they don't think they were drinking around the night of the launch. Or you think it means that these two guys are the only teetotalers in IV? You think 2 sober guys could have cooked up this plan to get a bunch of stuff from HD, build it, and then launch it in the middle of the night with no wetsuits? It doesn't seem possible to me.

I read the last line "alcohol was not a factor" as a nod to these young Gauchos having probably smoked the hell out of some great weed...

PIT - the young men weren't drunk. The cops confirmed that. So what if they came up with the plan when they were drinking? They carried it out sober, so they must have decided it was still worth trying. Why do you insist on blaming them as drunk kids? Sometimes young men get inquisitive and try to make things and do some dumb things. Doesn't make them drunk or bad. Also, they could have been stuck out there for hours. I got caught with no wind way up the coast with my Hobie Cat as a 20 something and it took us HOURS to float back to the beach in the current, we were dead sober the whole time. Stop insisting alcohol was involved with they've already said it was not.

Graven in gold or anything

Many moons ago when landline

When this jerk is found, he

Neiborhood : an area or

So its something that I've

June 15 Marks the START of Our Return to Normalcy

So the keys were left in it..