Jess Torres Martinez was born on March 5th, 1921 in Colton, California. He was raised in a migrant working family, growing up in Ventura County with 9 brothers and 1 sister.

Jess attended Buenaventura High School, excelling in track and field and won many races. He then attended Ventura Junior College. During that time World War II started when many of his older brothers were drafted into the army. He decided that it would be best for him to enlist on his own to join the Navy which he did upon graduating college in 1942. After basic training, he went to San Diego for training at the U.S. Destroyer Base and joined the USS Santa Fe in Long Beach during the winter of 1942-43 as a 1st class fire control man. 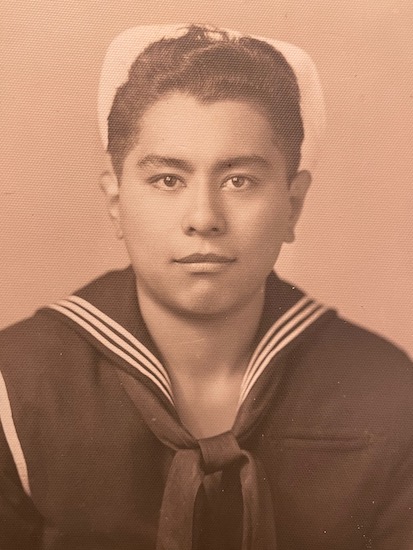 After the war, he went back to school at Cal Poly San Luis Obispo, graduating in 1952. He joined the wrestling team and won many matches. Jess went back to the Navy to serve the country in the Korean war, stationed in Seattle at the shipyards in Bremerton, WA.

When his service in the Korean War ended, he moved to Carpenteria and worked for the Santa Barbara Cottage Hospital as an electrician. Jess had a son, Jess Jr. in 1956, whom he raised on his own.

In 1962, he met the love of his life, Linda Jimenez, a shy young woman who also worked at Cottage Hospital. They married at St Joseph’s Catholic Church in Carpenteria on August 17, 1968 and moved to Santa Barbara. They had a son, Andrew.

Wish Jess a happy 100th birthday in the comments section!

Happy Birthday from the Fosters!

A very happy birthday and wishes for many more!

Handsome guy and definitely bright and highly motivated to learn. Reminds me of Dad. Coming of-age during the Great Depression limited the opportunities. He was in a good place, had both parents and made the right choices. I hope all his kids did as well as he did.

Happiest birthday wishes, Mr. Martinez. What a life you've lived--very inspiring! And, thank you for your service to our country, not once but twice!

Happy Birthday - hope it is wonderful and full of love!

Wow happy birthday! Your relative in the top photo looks so much like you, amazing smiles. Congrats on the big day and thank you for your service, sir.

What a beautiful story! Congrats on making it to 100!

Happy, Happy Birthday and thank you for your service!

AMR and Rescue cleared to