"We are unaware of any potholes that were filled outside the City's jurisdiction," said Public Information Officer Anthony Wagner.

It's still unclear if there are any leads or suspects identified with the theft.

Another City of Santa Barbara-owned vehicle is reported stolen, the second vehicle in the past month.

On Wednesday morning, the Santa Barbara Police Department requested the public's assistance in locating an orange truck owned by the City, used for filling potholes.

This is the second city-owned vehicle that has been stolen. On February 12, Police stated a white Ford F350 City of Santa Barbara Public Works truck was taken from the 3600 block of State Street in the early morning hours.

The Police have yet to publicly announce if this vehicle has been recovered, if any suspects have been arrested, or if the issue was a misunderstanding. Unofficial reports state this vehicle was recovered but that has yet to be verified. 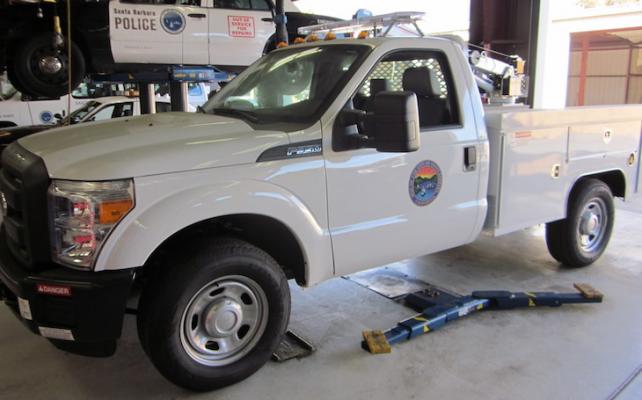 Highly unusual! Unlocked trucks? Inside job? How possible? What is the chain-of-command for keys?

My first thought was, "how do you hide a vehicle like this"? Second thought, "why?". This really weird. And expensive.

UPDATE: Recovered in Santa Maria. We are unaware of any potholes that were filled outside the City's jurisdiction.

Not really that funny. This is specialty equipment that I would guess costs in excess of 50k. Is the PD investigating HOW and WHY City vehicles continue to be stolen?

A rogue pothole filler, that’s a fun idea for a short story.

In both cases, keys were left in the vehicles. Duh? How hard is that to fix?

KEYT reported both of the stolen trucks recovered. I heard nothing about that first one. When and where recovered?

Dang, you probably can’t even unlock this vehicle on Grand Theft Auto.

The rest of us are unaware of any potholes being filled in the City's jurisdiction, all snide remarks by the City's PIO aside.

If it has wheels, put a GPS on it.
Most businesses knows this.

Key word is "Businesses". Our state and local governments are run by a bunch of boneheads that know nothing of how to run a business.

maybe....just maybe someone got tired of the potholes in town and in SM and took it upon themselves to fix the roads....but yeah highly unlikely

Great programs that lead to

I never see many police down

The main reason we have a

No one should go there. It

COASTWATCH we need the

Simple solution is to add a

Chip - the entrance to Lake

NostraChumash. With all due

We were in and around Santa