EZ Bike Project, a new electric bicycle (e-bike) demo program operated by SBCAG Traffic Solutions division, gets underway offering a wide range of free e-bike demos of various models including cargo bikes, cruisers, city bikes, and folding bikes to local residents and commuters as a measure to reduce traffic and air pollution in Santa Barbara County. The EZ Bike Project is located at the Bike Spot, a City of Santa Barbara self-serve valet bike parking facility at 1219 Anacapa Street in Downtown Santa Barbara. Those interested to reserve an e-bike must either live or work in Santa Barbara County and can visit the EZ Bike website to sign-up for a demo. In the coming months, SBCAG plans to offer shorter demo rides on weekdays and during single-day pop-up opportunities countywide.

E-bikes have become more accessible to the average consumer. Most of the leading bike manufacturers offer a few different models making it challenging to compare one model from another when they are only available for purchase online.

Kent Epperson, Director of SBCAG Traffic Solutions explains, “greater competition and economies of scale have brought down the price and increased the accessibility, quality and selection of e-bikes. The EZ Bike Project has a fleet of 10 e-bikes from local and online retailers that range in price from less than $1,000 to $3,500. The selection offers participants the opportunity to compare features, pricing, and ride quality between the different demo bikes. Either way, the investment one makes in an e-bike will save money compared to driving a car.” 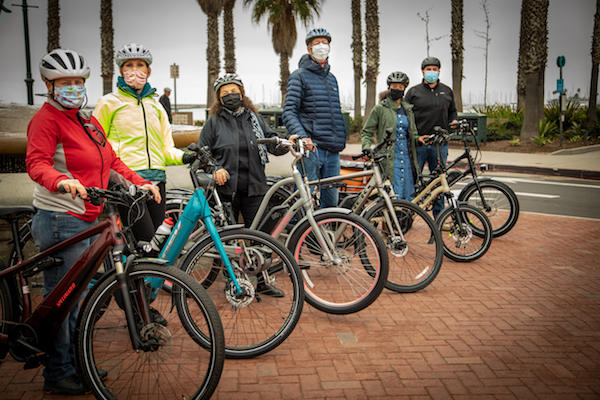 While bicycle shops offer e-bike test rides of the models they carry, they are generally limited to a short test ride around the bike shop. The EZ Bike Project offers the opportunity to test riding an e-bike in a variety of conditions and routes over the weekend and at an individual’s own pace without the pressure to purchase a bicycle.

There are several benefits associated with e-bikes in transportation for the environment and personal health. Nancy Eckert, SBCAG’s EZ Bike Project coordinator, notes that in addition to those benefits how much joy an e-bike can bring to people who have never ridden an e-bike before, “e-bikes are smile factories. I know that when people return the bikes on Monday, they’ll come back with fun stories of the magic moments and childlike wonder that they experienced while test riding an e-bike.”

E-bikes are recognized as more accessible to those who have physical limitations which might prevent them from riding a standard bike. Kendra Wise, Santa Barbara County supervising environmental health specialist, a recent e-bike convert after participating in a demo stated, “until I test rode an e-bike I had no idea that it was such a game changer.  After the demo day I ended up buying an electric bike and use it to commute whenever I can.  If a not-so-in-shape mom with a minivan can ride an e-bike, anyone can.”

Those interested to reserve an e-bike can visit the EZ Bike website to sign-up for a demo.  Reservation options are available for Thursday to Monday e-bike trials and must be made by 5pm the Wednesday prior to the reservation.  There is no charge for the demo, however a returnable credit card damage deposit is required to test ride a e-bike.

The EZ Bike Project is proud to partner with Trek Bicycles, Bicycle Bob’s, and Santa Barbara Electric Bikezzz.  These sponsors made it possible to offer a wider range of demo options for people to test ride.  Courtesy of the EZ Bike sponsors, participants of the EZ Bike Project can receive a discount for an e-bike or bike accessories. Bicycle Bob’s is offering a 10% discount (up to $250) on a Trek e-bike and Santa Barbara Electric Bikezzz is offering a free high security ABUS lock with the purchase of an e-bike.

I bet a lot of the same objections and fears were raised--rightfully so--when horseless carriages started careening down the streets. That said, I agree we need some regulation, especially as those heavy-duty e-bikes with big fat wheels resemble mopeds more than bicycles. I think ebikes are limited to 20mph on bike paths, but even that is pretty fast, especially nowadays when the paths are more crowded with commuters, families and so on, most of them on regular bikes--not to mention a few pedestrians and dog-walkers. E-bikers need to learn courtesy and hold back when whizzing around. Like those confounded backfiring early automobiles startling the poor horses!

What we REALLY NEED in this town is a roller skating rink.

At the speeds I am seeing, those riders need to wear more protective equipment.

"While people riding e-bikes were more likely to suffer internal injuries and be hospitalized compared to the other riders, powered scooter users had higher rates of concussion. E-bike injuries were also more than three times as likely to involve a collision with a pedestrian than either scooter or traditional bike injuries, the researchers report in the journal Injury Prevention.

Most significantly, the study found injuries from e-bikes in particular were more serious, said DiMaggio, who directs the injury research program in the division of trauma and surgical critical care at NYU Langone Health in New York City."

Pit mix quoting a study!!!! Great humor!!! Realize that any and all numbers by put have been at least tripled! What’s fun is fun!!!

Just keep them off the beaches and trails. Being smacked into by a 50-70 lb bike and rider that are traveling at 20+ miles per hour can really ruin your day.

Electric bikes are wonderful. I can get across town faster on the e-bike than I can in my car and I don't have to park. I ride in the street, not on bike paths because there are too many unaware people who walk on the bike paths and I don't see any way to enforce that.

I'm all for locals who would otherwise be driving (and parking) cars to switch to e-bikes. Riders should be wearing helmets, visible gear, and otherwise obey all traffic rules. Sidewalk riding is already prohibited, and those who ride on sidewalks should be ticketed, just as car drivers would be. Bike riders should be considerate of others, just as car drivers should be. (Note: It's not a perfect world, but I don't think there should be a double-standard when it comes to cars and e-bikes. It's possible to get along.)

I walk along the water front on a regular basis: from Milpas to the furthest parking lot at Shoreline Park. The e-bike is a pedestrian nightmare. People will get seriously hurt. There are no controls regarding the operation and speed of e-bikes on sidewalks and bike lanes. Who is supposed to run after the e-bike rider and get them to slow down? At the high rate of e-bike speed the margin to avoid collisions is very small. Mark my words: we will have some serious collisions between e-bike riders on pedestrians walking on the bike paths and sidewalks. The city is planning this e-bike rollout irresponsibly.

They should not be on the sideWALKS, but it is reasonable to expect them on the bike paths. As for speeds, some of the non-motorized bikes go very fast on the beach/bikeway —- walkers should choose the sidewalk or the grass area; I am a a regular dog walker there.

As well as on downtown SB , electric bikes are frequently on local bike paths and even trails, going twice as fast or more than standard bicycles. They weave in and out of walkers and joggers and are a nuisance. I call them motorcycles because the affect is the same, but without the noise. This whole program drags Santa Barbara down into "Disneylandia" for the tourism industry.

Zerohawk, I have expressed specific objections to this plan, a lot of which you voice as well. In adddition to all of these concerns I fail to understand how this will serve to reduce commuter car traffic (as promised). These rentals are expensive. One can apparently get a monthly pass which is also expensive. If you live in the central core of the city they may be convenient but are probably unnecessary, just walk. If you live in Goleta or Carpinteria or further out they have no functionality and will die a faddish death. Any, I repeat, why is this private for-profit company being given prime city space to do business when competitors have to pay rent for their businesses? Bad policy from the Bren School urban programmers.

But I'm seeing the E-bikes on the Goleta bike path all the time now. There are multiple signs stating 'No Motorized Vehicles'. Are E-bikes exempt from that? It doesn't bother me except when the riders are going extremely fast.

Bird, you are right. My sloppiness. But I think the issues are similar. While electric bikes are tempting as a convenience and tourist activity I do not see that they will do much about the congestion issues.

Aren’t you referring to the Rob Dayton/Trek BCycles, rather than this free demo program?

Bummer. Would love to do the trial but every bike model is booked out. Nothing available. I guess SBCAG told all their buddies first before putting out the press release to the public.

Have you checked the the rack on DelaVina? It’s been full most time I drive by, but that before the free trial started. Wait until the free period ends.

eh...i'm sure i'm alone here, but i am not for this at all. Totally against it. Why? Where is the regulation for speed? I've already had issues with these bikes, speeding down the side walk and almost hitting my dog last weekend. I spoke to some friends at SBPD, they aren't even sure how it will be regulated. These bikes reach speeds and maintain speeds as you would think they would being a powered vehicle. They do not belong on the sidewalks or bike paths. Plus the clueless non focused tourist riding them? So who will fork out the bill when one of us locals gets nailed by one of these tourists go go bikes? Plus, this is all a cash in pocket for Trek (local guy) and the city council. Plus, what is the point of a bike that you don't peddle and power yourself with your own muscles? It's called a scooter and it belongs on the road. These are no different. Harbor Patrol also has criticized these things. Another dumb and poorly thought out "plan" by our current city council. More than likely it will fade away as most of these stupid schemes do, but what do we do until then? Who will be keeping an eye on them as they speed around town, breaking traffic laws and more?

Yep, I already got hit (from behind) by one while walking next to Ledbetter Beach by a tourist who really didn't know how to ride it. Fortunately no injury but still... I imagine that I wasn't the first and I'm certain that I won't be the last.

You are right about the questionable influences with the government officials. There is a problem locally with City of Santa Barbara employees giving preferential treatment to individual businesses. We citizens had better get things back under control.

Employers should be very

Which is was just washed and

Can you read one page? As

Our healthcare system is a

Too much profit in healthcare

If you think you've got a

Forgive me if I don’t read