The edhat reader who originally shared the video of two people stealing packages from their downtown apartment complex has reported one suspect was arrested.

After posting the original video on January 6, 2021, edhat received a tip from another reader on the possible identity of one person in the video. That tip was forwarded to law enforcement who was able to positively identify the suspect and make an arrest on February 18.

Two people broke into 401 Chapala Street in Santa Barbara on December 31st at 3:50 pm. They stole a couple of packages and then got back into their Mercedes they parked out front and drove off.

SBPD came and took the report but straight out told me even if they caught them they would not arrest them because of Covid?? So we have criminals going around doing all these crimes because they know they will not go to jail even if they get caught. Seems like a win-win for them!?

If anyone has information on the suspects, please call the Santa Barbara Police Department at 805-897-2465 and reference report #21-316.

Below is a video compilation showing the suspects stealing packages: 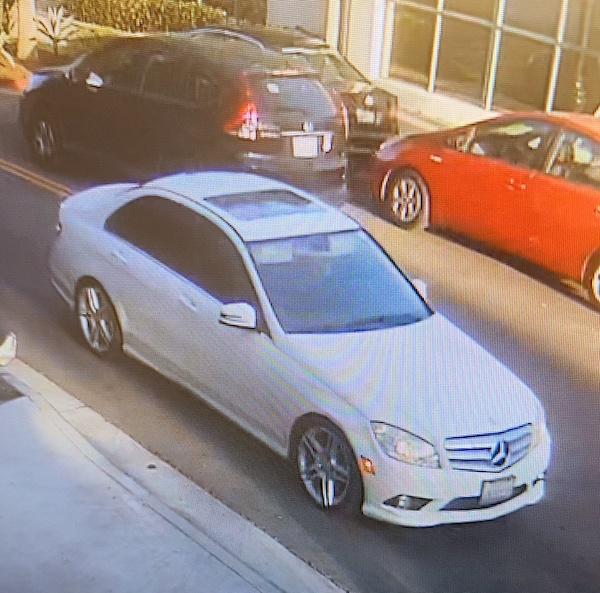 Did they say they wouldn't arrest them, or that they wouldn't go to jail? My understanding is that with the zero-bail COVID order, nonviolent criminals are arrested but not booked into jail. They aren't just let off.

Correct, they still face criminal prosecution. I do not appreciate the police saying this sort of stuff. They are should not be engaging in political comments when doing their job. Their duty is to enforce the laws as we (The People) write them.

yes this is true and confirmed by several friends working at SBPD. "The people voted for this...just makes our jobs more difficult and simply a waste of time, our hands are tied...we can't do much"

And because they are really responsible citizens, you know they will appear.

RHS - I didn't read anything indicating ZERO's friends at the PD were on-duty at the time the (alleged) comments were made. What if they were? Like anyone else, cops have the right to say whatever they choose and whenever they choose within the law. If they make illegal/immoral statements I would agree, like the crook you defend, the incident should be properly handled. Why should anyone truly care when the (alleged) comments were made? IMO, the cops and anyone else critical of these changes are 100% accurate. These changes only benefit criminals, written by ignorant legislators. You would probably have your BP go sky high if you were to hear what they might say on duty about certain politicians. Maybe re-education in one manner or another is needed. What do you think?

I'm not sure how they (criminals in general) get away with this, but this theft could be considered a "poverty" crime. Many cities, such as Seattle, are allowing/considering certain infractions to be considered as poverty (or mental illness) crimes. This frees up the police forces in these cities no focus on more serious crimes. In Los Angeles, the DA has made it known that his office will no longer prosecute: Trespassing /
Disturbing the peace /
Driving without license /
Prostitution /
Criminal threats /
Drug possession /
Minor with alcohol /
Drinking in public /
Public intoxicating /
Loitering /
Resisting arrest / Under the influence of controlled substances......plus there are no "enhancement" to be considered when sentencing. I suppose that is all coming our way, or is in fact, already the case here in SB.

Yeah, it's a total disaster. These policies spell ruination.

Babycakes, i think it's already here.

The new LA DA was the former San Francisco DA and did the same there. The new SF DA has taken it further, decriminalizing pooping in public. So sad for law abiding people. what are law abiding people supposed to do now? What kind of country are we now?

You don’t get to show up for the crime in a nice Mercedes and then claim “crime of poverty” as a defense. Unless the Merc was stolen or carjacked. But that would make it grand theft or worse.

Watch your stuff everyone, especially if you live downtown. Sh-t I might have to get a gun or a Rottweiler if this is what things are coming to. The key is to not be the "easiest" place to rip off.

Thanks whoever posted this great video. I'd love to let a big pit bull jump on these two losers.

That is fine Don't arrest them let the victims take care of them.

Agree 100% Deal with it yourself drag them onto your property, self defense! Lowlifes in a Mercedes. Champagne taste with Beer Pockets.

Roger, exactly what happened in Isla Vista a few weekends ago, some residents caught a package thief, they confronted, he threatened with a gun, turns out it was a pellet pistol, they disarmed him and threw him a beating he won't soon forget. Amazing how news travels in a small place like Isla Vista.

NOTHING happens- NO consequences for theft in California- It's a free for all. It has nothing to do with COVID and everything to do with District Attorneys and those who you all voted for in Sacramento... Live with it, the criminals are....

This isn't new or because of covid. The CA people voted in 2016 for Prop 47, reducing several felonies to misdemeanors, selective enforcement and prosecution of crimes. The financial savings were going to fund the "Safe Neighborhoods Act" I hope we all feel safer now that the criminals know if they steal less than $950 they probably won't suffer any consequences.

People, please take the time to read and understand what your voting on.

The usual brainiacs drooling in their collective navels again in the comments section.
Only AlexBlue gets credit for asking the glaring question. The rest of you, enjoy your continued irrelevance.

LOL. One can hold both views. They are not mutually exclusive.

Sorry you got jacked, they seem pretty brazen.
You had good coverage on cameras, too.
Is there any photo enhancing software you can use on that license plate image to get the perps?

The guy kinda looks like a registered sex offender on Megan's law listing.

When LA defunds the police, crime spreads to Santa Barbara. Look at all the stabbings, shootings, sexual assaults. The left like Newsom and those that support him protect and reward criminals over law abiding citizens. Over 17,000 criminals were released who may had Covid. A chance to be victimized twice brought to you by California Democrats.

Another outpouring of hogwash.

Girlfriend. We grow weary of you. Run for council or for congress - otherwise, please take up knitting and do something else with your hands.

So witch one are we still looking for?

The female. The male was arrested and most likely released.

How do you know the male was arrested?

They're getting brazen friends! We know why too. As you can see, he had help. A couple who steals together will hopefully get arrested together!

Lakergirl, You hit the nail right on the head!

Fantastic they got caught -

LAKERGIRL has it right, and yet she gets 5 down votes. Sadly, that comes as no surprise.

Maybe in your twisted world where facts don't matter. Here in reality, defunding the police how zero, zip, zilch to do with criminal law enforcement. It's the orange man tactic people have latched onto: say something incredibly dumb and farcical to distract from the real issue, that it totally prevents even basic discussion of the true issue at hand.

Can't take them into custody? Ankle bracelte, implant a chip or tattoo them.