Sheriff’s Detectives, along with detectives from the Santa Barbara Police Department have arrested a suspect for alleged sex crimes that targeted elderly victims in a care home on S. Patterson Avenue in Goleta, as well as a second care facility in the City of Santa Barbara.

On January 5, 2021, Sheriff’s Detectives began investigating allegations of abuse that occurred between 2013 and 2020 at a care home in Goleta and learned that an additional offense occurred in Santa Barbara. Through their coordinated investigations, Sheriff’s and Police Detectives learned that 32-year-old Jared Ekola of Santa Barbara targeted two vulnerable patients at the care home where he was employed in Goleta and another victim at a care home in Santa Barbara. Ekola allegedly engaged in sex acts with the victims who were unable to consent, protect themselves, or report the abuse due to their physical and mental status.

Based on their investigations, detectives authored search and arrest warrants that were served at Ekola’s residence in the unincorporated area of Santa Barbara this evening. Ekola was booked at the Main Jail on felony charges including elder abuse, rape and other unlawful sexual acts. He is being held without bail.

This investigation remains ongoing and anyone with information is encouraged to contact Sheriff’s Detectives at (805)681-4150.  If you prefer to remain anonymous, you can provide information by calling our tip line at (805)681-4171 or online at SBSheriff.org. 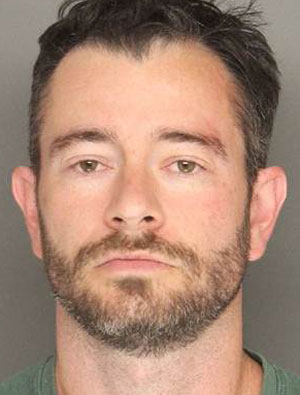 I know that care home on Patterson too. Knew someone who died there a few years back. It's known for being the worst. Wonder why none of the agencies that oversee these flop holes don't deal with the problems there? Looks systemic. And WHO does oversee these 'certified' places anyway?

Wait, wait, isn't Santa Barbara a sanctuary city for people like this?

When my girlfriend and her Mother was still on Earth the Mother was in a board and care home in that general area they were sexually harassed by a worker there I confronted him he described to me what he wanted to do to them. I told him about the Neighbors wood chipper and in detail what I was going to do to him. He started crying, my girlfriends Mother was transferred that night. I was serious a wood chipper can make miracles out of pieces of crap.

Wood chipper is too good for this waste of life. I can't even begin to comprehend this...

I understand we must let the man have his day in court, however, if it is proven he abused fragile, defenseless (because of physical or mental status) elderly people, I am inclined to agree with Roger, as I often do in regard to these heinous acts... straight to the woodchipper.
My dear father, who suffered from dementia, spent his final few years in a very nice assisted living home, and despite seeing him several times a week for the duration, one can never be 100% certain what is happening to your loved one. This is the kind of thing that nightmares are made of. UGH.

Gavin will get him released because of covid.

Victims at a care home in Goleta were subjected to sexual abuse for SEVEN YEARS? While I'm on board with innocent-until-proven-guilty, steps must be taken immediately to prevent this from happening again at any of our care homes. We are failing to protect the weakest among us.

There is only one care home on S Patterson that I am aware of and it is the worst in terms of patient care and facility maintenance. I have know several people who had the unfortunate experience of being there. One was there for a year. On my many visits it was appalling to see the how unresponsive the staff were to patients. Medications given incorrectly, patients sitting in their own feces and having men aids bathing and taking women patients to the restroom. My friend was incredibly uncomfortable with this but was told she didn’t have a choice. It has been three years since I last knew someone there. I highly recommend avoiding this place at all costs.

Hold on everyone. Like it or not, he's not guilty yet. After the trial we can discuss his punishment.

People who post lame comments and complain about being censored. Hahahaha! Rich.

seabird - that was witty- good one!

I hope you are right that there may be some infinitesimal chance he's falsely accused. The world would seem happier if these things weren't true, sigh. Seems impossible the victims would lie, but to normal people it also seems impossible that anyone could do such a thing.

@Oops, I've got a bridge to sell you in Brooklyn. It's called Terms of Service, not censorship. If you would like to not abide by the TOS of the forums/social media/etc. that you use, there is literally no one stopping you from creating your own forum with your own TOS. Go for it.

@Sail380, I would fully support that!

Oh Achebe71, will you read a little closer? Did I opine on his punishment? In fact, no. Not a word. Nice armchair lawyering, but you clearly have not the clarity of comprehension required to have studied the law. For the record: the judge may not decide on a punishment unless and until he is found guilty. The general public has the very right to discuss anything they wish - it is inconsequential as well as unavoidable. That's life. And the law. Learn it, or shut it.

Seabird - the general public use to be able to discuss anything they wish...that has now changed!!!! Its called censorship all social media is doing that including Edhat

Correct seabird!! Can we discuss public firearms training so there are fewer accidental shootings?

Old people lying? Wow, you are a disgusting person.

@seabird So if he is found innocent, will you take back what you said? Or do you not believe in innocent until proven guilty, also while you have the right to opine now if you are called to jury service for this case you will not be able to participate as you already have prejudice...

A Viking Blood Eagle works too...

Or we can show him the wood chipper now..

Seabird is 100% correctomundo. Some corrective deduction surgery should be ascribed to this subhuman predator.

Wrong. After the trial, the judge can discuss his punishment. The general public is free to discuss anything they wish in the meantime.

Nightmare of a guy who needs to be locked up and the key thrown away. Oh and yeah, I agree - burn in hell

The "Big Fix" is just that.

CSF- Please know that your

The Cancer Center is a first

We saw them discuss this at