Craig Anderson, then 59 of Thousand Oaks, was a non-sworn investigative assistant at the Ventura County District Attorney’s Office. He was one of three men arrested in June for cutting down and damaging a large sign on Westlake Boulevard in Thousand Oaks, which displayed the letters “BLM.” Darrin Stone, an employee of the Ventura County Sheriff’s Office, and Jeffrey Moore were also arrested.

On May 31, 2020, Anderson was captured on camera cutting the sign down and was going to remove it from the area when he noticed the camera and left the sign at the scene. Anderson was contacted at his residence by investigators and also received a citation for vandalism.

To avoid conflict of interest, the Ventura County District Attorney's Office referred the case to the state Attorney General's Office who stated no vandalism charges were filed because "in that case, the evidence was insufficient to show the crime of vandalism had been committed," according to the Ventura County Star.

Anderson was reportedly off-duty during the time of the incident and resigned from the District Attorney's Office.

The Ventura County District Attorney has filed misdemeanor vandalism charges against Stone and Moore for their involvement. 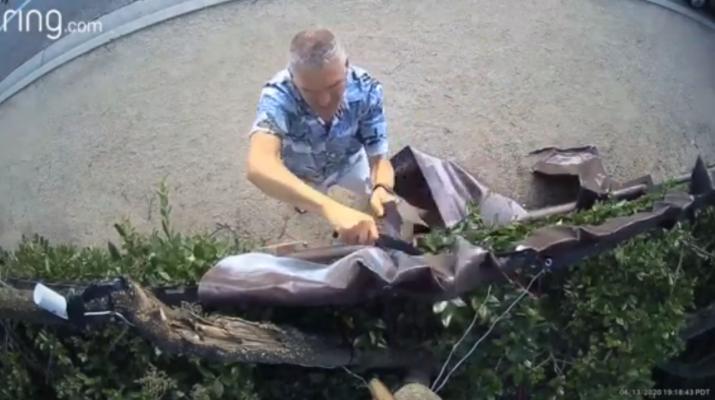 "in that case, the evidence was insufficient to show the crime of vandalism had been committed" - the video shows him cutting down the sign on private property. What is insufficient about that? See, this is why no one trusts our justice system.

It seems if you're white and republican you can get away with just about any election related shenanigan.

The main thing is he resigned his position and is no longer associated with the DA's office. That was probably the deal they made. This is probably justice for this minor crime. The other guy probably doesn't want to resign so they are pursuing the charges.

Picture if it was a black man cutting down a Trump sign on private property. He would be shot in “self defense” or accidentally shot over a dozen times for “reaching in his waistband.” The Ventura court system and sheriff are arguably a bigger pile of garbage than the SB Sheriff and courts, and that’s saying a lot. Try asking a Ventura deputy or court officer about the Hells Angels and watch the look on their face. The bad apples made a pie down there.

Hate related crime is ok in Ventura? Got it.

Reread the OP, it states the Ventura District Attorney referred the case to the state Attorney General's Office who stated no vandalism charges were filed. Seems Ventura County did the right thing.

As usual, law enforcement is immune from prosecution for committing crimes.

if he had taken down an "all Lives Matter' or Blue Lives Matter, he would have been promoted, maybe even encouraged to run to for Newscum office

I investigated myself and it turns out I did nothing wrong.

Was the sign on private property? The story merely states, “... on Westlake Boulevard in Thousand Oaks”
Freedom of speech is important. But so are property & public property rights.
Glad VTA referred it out.
But agreed. He’s on video.
But he’s being treated equal to every other “low offense” criminal. No consequences.

SBGETS - yes, it was on a fence on private property facing the street. The owner's property AND 1st Amendment rights were violated here.