It's with a heavy heart that we announce the passing of one of edhat's most dedicated readers and contributors, Judy "Flicka" Pearce.

Flicka was an edhat mainstay, often sharing stories of Santa Barbara and Carpinteria history, Fiesta parades, equestrian lifestyle, and all things local. She frequently posted on the comment board sharing her words of wisdom and creating online friends that she would excitedly meet in person at edhat events.

Flicka last spoke with edhat's publisher in April giving an update on her physical health, but through it all, she still spoke of others who had it worse off than her. Flicka was a truly selfless and kind person, she will be greatly missed among the edhat community.

She won our Fiesta contest last year and provided a photo of her as a kid dancing on a float during the Old Spanish Days Parade. She wrote:

"The largest float ever in the parade was 90 ft long. I was on it dancing, it was 'The De la Guerra Fandango', the celebration of the marriage of Anita De la Guerra in 1836. There were no motorized vehicles allowed in those times. There were 14 horses pulling the float. As we turned onto State from Cabrillo Blvd. the hitch broke. I can still picture them leading the team of sorrel horses away. A tow truck had to pull us up State Street, the 1st motorized vehicle allowed in the parade. Below is a photo of my cousin and me doing the Mexican Hat Dance on the 90 ft float. I am on the left (had to be the boy because I was so tall, 9 years old)." 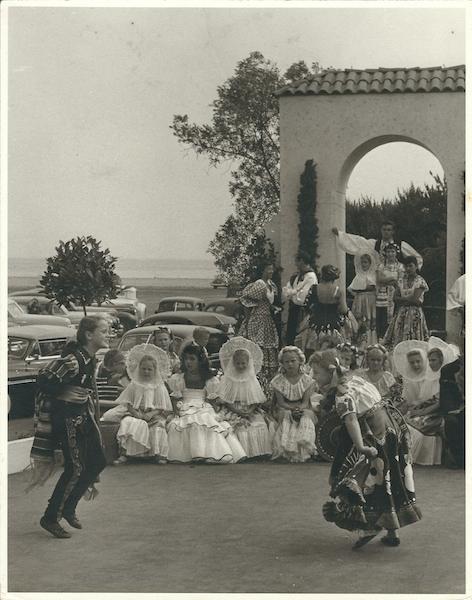 Below is her obituary.

Judy was born on August 5, 1941. She grew up on her family’s homesite next to the Miramar Hotel which was purchased in 1907 by her great-grandparents. Her fondest memories of growing up in Montecito include taking off in a plane from the lawn of Bonnymeade, and riding her horse from her home to Our Lady of Mt. Carmel School. In the early 1950s, Father Cook built a corral so that she and her best friend, Bunny Schmitter (now Smith), could have their horses safely and comfortably waiting for them to get out of school. Judy said that one of the best views in the world was looking between the ears of a horse while riding down a quiet Montecito trail. As teenagers, Judy and Bunny were often riding their horses over the mountains and camping at Pendola and various other locations in the backcountry. They could also be found riding their horses into the ocean for a swim, participating in gymkhana events, and occasionally as riders in ostrich races.

Judy’s first participation in the Old Spanish Days parade was in 1946 at age 5. In her youth she rode her horse down a torch-lit canyon for the Fiesta ceremonies held at the County Bowl. She spent a lifetime sharing the Fiesta experience with family and friends by providing costumes to countless numbers of people each year. For the very fortunate she offered entry with her into the parade where she was always found on horseback in a dress she made herself. She loved confetti and used it to recreate her childhood memories of Leo Carrillo sprinkling confetti from his horse along the parade route.

One cannot envision Judy without seeing a flower in her hair. It began in 1968 when her horse, Jingles, took a bite out of her favorite daisy bush at home. She placed the daisies in the horse’s mane and bridal, and in her own hair. As she rode down East Valley Road she encountered her brother, Owen Guitteau, who commented, “Here comes my sister, the flower child.” She decided he was right and wore a flower every day from that point on.

Judy was a highly respected horsewoman, local historian, and writer. Her writing career began in 1984 with a weekly equestrian column in the Santa Barbara News-Press which continued through 1987. She was a regular contributor to Montecito Magazine, and Montecito Journal. Through her astounding memory of details and dates, and her relationship to so many long-standing families in Montecito and Santa Barbara she was a valued source for many local historians.

Friends were always welcomed into her home, and most became family. While raising her own children she often took on “extra” kids for extended periods of time. She loved to cook and often would go into her garden to gather the ingredients for a given meal. Her homemade bread was legendary. It did not matter if it was a Monday or a holiday, if a person was at her house at dinnertime, they were more than welcome and strongly encouraged to stay. She moved through the world with love, truly supported her loved ones in the choices they made, and embraced diversity. She touched many people with her uniquely bright spirit. As a friend once wrote about her, “She is the last one barefoot and dancing, …forever with a flower in her hair.”

Judy passed away peacefully at home in Carpinteria on September 14, 2020. She had been undergoing treatment for cancer for nearly a year. Her husband, Steve, was holding her hand when she took her last breath.

A memorial service is intended for the future. In lieu of flowers, a donation in Judy’s memory may be made to the Carpinteria Valley Historical Museum, 956 Maple Ave., Carpinteria, CA 93013.

Ah, man... So sorry to hear. Hail and Farewell, Flicka.

Rest in Peace, Flicka. So sad to hear this.

When everyone else posted negative comments toward me you were always there to bring my spirits up no matter what.... Many times your comments alone is what kept me going..When I asked for Turkey Soup you bought me a care package. You were one of the nicest people I ever had the pleasure of knowing in Santa Barbara FLICKA...You will be missed Rest in Peace kind soul...Roger

I'd read Flicka's postings on Edhat for years, completely unaware that I'd known her for decades in real life. She was one of maybe three people I've known in my entire life who I never, ever heard anyone say anything negative about. Judy, we will always love you! You were a true local treasure.

Always embodied the true spirit of civil discourse here where often intemperate remarks are the norm. Thank you and gently R.I.P.

So sad to hear this. She was always thoughtful in her comments, and had so much history to share. Always enjoyed reading her thoughts. RIP Flicka, Godspeed.

I admired her comments and am glad to know about the wonderful life she had. Happy trails, Flicka!

So sad....but great to hear she lived a full life and was loved in the community !

I did not know "Flicka" was Judy.

I met Judy back when I was dating Tom's sister-in-law, what a wonderful lady she was. As has been said, always smiling, friendly, giving, and a truly awesome lady.

Carpinteria, Old Spanish days and the community have truly lost a treasure.

My condolences to Tom and his family as well as to the community.

Mountainman: Y’know, I think we might know each other, too. Does Anapamu Street ring a bell?

Oh, I am so sad! I've missed her comments and whenever I've signed on here i've hoped to see her observations that were always gentle and interesting. Lots to learn from how she wrote. I wish I had known her in person.

I always appreciated her posts here & have missed her. A true SB treasure. Condolences to her family & many friends. RIP Flicka.

Flicka was always generous with her stories and kind in responding to the comments of others. May she Rest In Peace.

Have missed her comments very much the past months, her kindness and good sense, her generosity of spirit—so welcome always, and especially in the past few years. So sorry that she is gone, and happy to learn what a happy life she had. Condolences to her family and all who knew her. Ride on, Flicka!

Thank you Flicka for always providing warmth, wit, willingness and wonder in your consistent and frequent posts. You're input and kindness will be sorely missed. And thank you Judy for being a gregarious and giving person about the community. You were a treasure and guiding light for many. Godspeed.

Deepest condolences to family and many many friends. She was truly a beautiful woman with a beautiful soul. Enjoy the ride, Flicka! xo

Judy from the neighborhood - you will be sorely missed.

I did not know Judy personally as others on this thread, but I always appreciated her posts. Sounds like she made a lasting impression on this community and those who knew her. RIP.

I will miss Flicka's to-the-point sensibility, her empathy, and the glimpses of local history she dispensed like so many flowers while walking down the aisle of life. Rest in peace.

Very sad news to hear...Judy was always a real treat to see. Always had a flower behind her ear and a story to share. My mom was at Friendship Center for a few years at the end of her life and Judy would visit there often. She really hit it off with my mom. She was so kind to all of the seniors there.
Judy and I knew each other from 'around town' at various events. Sending condolences to her family. Know that she's being remembered fondly by so many today - she touched so many lives. RIP Judy.

RIP FLICKA, we all will miss you dearly.

I loved reading Flicka and her contributions to Santa Barbara. I never got a chance to meet her and sorry about that. She seemed like the best kind of friend. RIP Flicka.

Flicka always had considered and thoughtful posts. She imparted much knowledge about the area without ever being snarky. Her posts were thoughtful and occasionally hilarious. I did not always agree with her but highly respected her opinions. Flicka you will be sorely missed! Condolences to her family.

Oh NOOO! I adored FLICKA. A wonderful lady... we need more people like her, truly a ray of sunshine. Rest in peace dear Judy. SO sorry to hear this news.