After much discussion and weeks of local, social, and national media attention, the original Sambo’s has a new name.

The name of the iconic Chapala street cocktail bar and restaurant from the ’90s and 2000s has a new home, a breakfast spot on Cabrillo Boulevard. For nearly 63 years, the original Sambo’s served up pancakes, sausage and hash browns at 216 West Cabrillo.  The Sambo’s concept spawned by two Santa Barbara fellows grew quickly to nearly 1200 restaurants nationwide before being sold.  In the end, there was only one Sambo’s as of July 15th there is only one Chad’s.

Carrying on the tradition is Chad Stevens,  the nephew of one of the original creators of the Sambo’s chain.  The restaurant has been a part of the Santa Barbara waterfront since 1957 and no changes in the menu or hours of operation are planned.  You can’t flip for your dinner on Mondays and nobody is wearing a banana suit, however, they still serve you a mean Bloody Mary and omelets are probably better for your wallet and waistline at the new Chad’s.

For now, it’s outdoor dining only but that’s not a bad thing, expanded seating, umbrellas, and plenty of social distancing is in place making the new Chad’s a perfect spot for breakfast or lunch 7 days a week. 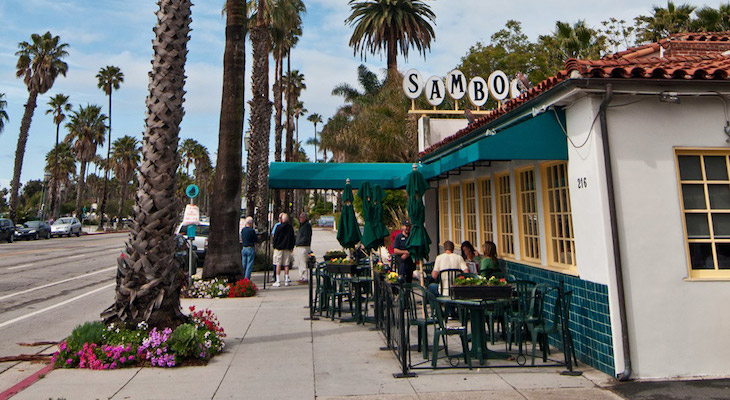 June 4, 2020: Sambo's Restaurant Plans to Rebrand Amid Calls for Boycott

Whatever the story behind the "original" name, the chain restaurants commonly had racist stuff from that story relating to our south and not India on their walls. I lived in Virginia and believe me, Little Black Sambo was not a term used for Indian immigrants. You must not have been reading the original posts on this issue.

Edhat - WHEN will you allow readers to read deleted comments? This was possible years ago, before you “upgraded” this site.

Of course some comments are too extreme to be read by anyone. Why would anyone allow racist misogynistic and foul posts to be viewed on another part of the site? We already know that evil exists in the world, and don't have to read deleted posts on Edhat to be reminded of this.

Amazing and wonderful to see the deleted comments there in red, plain to read. And the recent upgrade is excellent, thank you for it! Now, if only the SEARCH function worked better!!!! yeah, I know, complain, complain!

K8, you can. Click on the penalty box. Also not sure why you put upgraded in "quotes." This site is much newer and more responsive than the old one, but I'm sure the edhat staff would be happy to answer your questions if you emailed them instead of complaining on an article that has nothing to do with this.

Wait. There was a banana suit involved? I’m always the last to know.

Yawn. Not very interesting, but it will do.

Um, nice rant but the owners name is Chad. He used to own Chad's on Chapala too... They had a great happy hour and served a mean baseball steak. I think it closed about 15 years ago.

I agree with you last sentence, thank goodness.

9:00 wow. You win edhat today. 14 lines and more than 14 topics. Looking forward to your next microburst of ideas.

Should have named it SamBatt's

I love the new yellow umbrellas.

I liked the [Peace]&LOVE. Easy to remember, too.

Perfect. Now, can we PLEASE not have any more posts about this?!

I can now drive out-of-town visitors past "Chad's" without having to thrust small children onto the floor of the car so they won't have to see the dreaded S-word in all it's raging antebellum depravity. I shall now be able to sleep at night. Thank you, Jesus!

no, he messed up his apostrophe s!

My sentiments, exactly. I know it's the guy's name and all, but it is highly unimaginative. A restaurant once hugely successful using racial stereotypes has adopted a generic name sometimes associated with white privilege these days. Chad's?

ZERO: Surely by now you know me better than that! I mean, yeah, when Cousin Rachel Harminny and her kids from Berkeley would visit, we'd have to divert her twins' (Madysynne and Brooklynne) attention from the S****'s) sign on Cabrillo Boulevard, lest they go into traumatic seizures. But now, thanks to the Mighty Power of Social Justice Warriors throughout Southern California, CHAD'S has risen from the ashes to become the new symbol of Rachel's attention. No more Rachel slurs! Now…who wants pancakes?

rex...thin skin eh?
"without having to thrust small children onto the floor of the car so they won't have to see the dreaded S-word in all it's raging antebellum depravity"
i hope to any god out there that you were being facetious rather than serioues

REX, you left off your /s

I think they need a sister restaurant. Hmm, now what would be a good name. Maybe "Karen's"?

I feel so much better now.

Wait, now were is this?

Female with a Gun on Castillo Street

I wonder what a social worker

You guys can whine all you

Please don't! It drives me

This is fantastic. Thank you.

If this really seriously

A few of us here, commenting