I started noticing these signs popping up around the Westside but I didn't stop to read it until Councilmember Oscar Gutierrez posted about it Nextdoor.

There is a movement to rename San Andres Street, the main thoroughfare of the Westside, to Calle Dolores Huerta. The sign states that San Andres is named after Andre Pico, who fought during the Mexican-American War, "was neither a saint nor a resident of Santa Barbara."

Dolores Huerta is an American labor leader and civil rights activist who, with Cesar Chavez, is a co-founder of the National Farmworkers Association, which later became the United Farm Workers.

What do edhatters think about renaming the street? 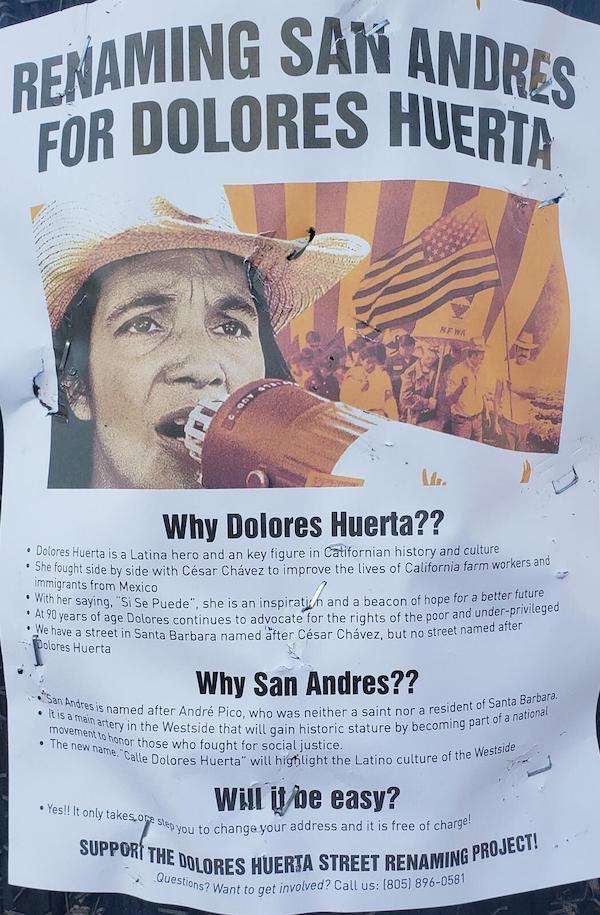 10:42, we "this isn't the time" as often as we hear the city say "we don't have any money" to make city improvements, while they still have enough money to pay for their raises and benefit increases. Both phrases run neck and neck.

please stop. I guess we're out of statues to topple unless they go after the dolphin

The Dolphin wasn't an asshole.

OMG what a great idea. Topple the dolphin statue. Melt it down and cast a cannon for defending the town from cruise ships.

There are no more cruise ships. Covid killed the entire industry. City will need to make up their budget shortfall somewhere else .You are safe.

Does/did she live in Santa Barbara?, Google say's she was born in New Mexico - no apparent relationship to SB - why do this?

She was co-equal or maybe more important than Cesar Chavez in organizing the farm workers, and he has a street with no local connections that I know of. Why not honor a famous Californian? I know it is unusual to honor someone who isn't rich but that would be a good thing.

There seems to be energy behind changing Indio Muerto to something else. Maybe these two groups can join forces and rename it to Dolores Huerta.

I agree with K8.
Thousands of place names in the US bear the name of Cesar Chavez - many of then were changed from something else. Dolores Huerte was instrumental in the American farmworkers movement, and yet only a few places acknowledge her contribution. The truth I believe, lies with her gender.
BTW - Leo Carillo never lived in SB, nor did Juan Cabrillo.

Me, a Latino male born and grew up here in SB, leave San Andres St. alone. So he was not a saint nor born here, but he fought for SB. To me that counts. If it does get changed to Dolores Huerta St., I will always refer the street as San Andreas. ALWAYS!!

That's right, it often gets referred to as San Andreas. Because we love and value that name so much.

Anyone else get an eye-twitch from the grammar and lie on the bottom of the poster: "Yes!! It only takes one step you to change your address and it is free of charge!" Anyone who prints multiple copies of things that have errors, well, they just aren't paying attention to details. AND as for one step name changes, who are you kidding? ALL of us can so easily imagine the horror of changing every document for the businesses and homes on that long street. It would be a huge inconvenience. Name a building or a park for her and be done with the pandering to the PC mob of the moment.

Let the residents and owners of San Andres property decide whether they value this name change enough to want to update their documents. They don't need triggered internet commenters deciding for them.

Will City pay each resident $10,000 or more? When my street name was changed it cost each resident between $7-$12,000 to change all legal, tax, insurance, registration, wills, titles, inheritance, work and other documents. In the end, the neighbor enacting the change offered each resident $20,000 for the headache, stress, and time required to change.

My research doesn't support this, what is your link for this?

This was not an overnight process. The group has been working on this for at least six months. It has nothing to do with any other movement, political position, or anything else. It was merely about honoring a woman whose civil rights work impacted the entire country. My guess is that those of you who object to the name change, are doing so because you feel threatened by a Latina. If you so object to changing the street name, petition to change your own street name to something like White Way or NoColoredHere Court

Neither do any of the others who have commented here in a negative manner...

Brooklyn’s final comment is part of the problem. WHY do you assume only white people are objecting all these changes. It’s not healthy for you to think that way nor is it true.

Now who has the problem here.
It has a Hispanic name right.

Many constructive suggestions have been made on NextDoor and here as alternatives to renaming a major street in our neighborhood. They should be considered. If there is a need to honor more women, as I was told when asked to sign the petition outside Foodland, I suggest we start with Pearl Chase who was responsible for the integrity of the design of our city. Finally, our city is replete with historic and meaningful street names which are part of its identity and culture. We should be careful to make changes which build on what is already here.

Brooklyn,
I do not feel at all threatened by a Latina or Latino. The timing is bad we are in the middle (or maybe just the beginning) of COVID-19, this will cost the city a lot of money, and impose inconvenience on those who live on/work on this street. If you wanted to change the name to Abraham Lincoln Way I would still feel the same.

Leave it alone! There is nothing wrong with the present name. and there already a Via Huerta. I'm sure the lady is worthy of having something named after her, but changing the name of a long and densely populated street like San Andres is ridiculous. It is way too much trouble and expense for both the city, residents and businesses.

That roughly translates to "garden of sorrows".

She endorsed Cathy Murillo - worst mayor ever. Before that she was the worst city councilmember ever and this is her district. Do not rename my street after her!

That'd really shake people up, considering that you've managed to pair a masculine article with a feminine noun.

I guess if the comments by people that say it can cost a lot of money to change legal documents are true, then maybe the street can have the name San Andres but some signs giving it the honorary name for Huerta? Is that a compromise that will make everyone happy or everyone dissatisfied?

Or maybe like the "Douglas Family Preserve" called "Wilcox" by the locals; and "Arroyo Burro Beach" called "Hendrys" by locals!

Douglas Family Preserve was a private property transaction - honoring the major donation from the Douglas Family, along with many smaller community gifts, which made it possible to put this "Wilcox" property into private conservation ownership for public enjoyment. It was a remarkable community effort and we remain grateful to the significant Douglas family donation that put the long-running fund raising effort over the top, just in time to save this property for future generations.

Although I have researched this a little and these street name changes do not require that everyone spend $20K to change all their legal documents the Monday after the change is done. The changes are done over time as your licenses come up for renewal, or you sell your house. So doesn't cost anyone anything right away and the changes are just part of the transaction at the usual cost for everything else. Nice try to get everyone riled up, though.

It's a city street and to change the name of a city street should be done by city residents, not just those who live adjacent to the street, as though it is an island or a private thoroughfare.

Written by Walter Tompkins, known for writing most of the local histories, and posted by Ray Ford at http://www.sboutdoors.com/the-westside.html

"Following California statehood in 1850, Santa Barbara's Common Council authorized the surveying and naming of our city streets. The ten major north-south streets situated exclusively on the Westside derived their history-oriented nomenclature as follows: Chapala, for a lake in Jalisco Province, Mexico. De la Vina, for the vineyards it crossed. Bath, or Banos, led to the public bathing beach. Castillo pointed toward the Castle Rock landmark. Rancheria crossed one of thirteen local Indian rancherias, or villages. San Pascual was the battlefield where the Mexicans whipped the Yankees. San Andres commemorates Gen. Andres Pico, commander of the Mexican forces. Chino was named for Rancho Santa Ana del Chino, another Southern California battlefield. Gillespie, for Lt. Archibald Gillespie, an American hero of the Battle of San Pasqual."

So maybe we should just celebrate this californio history already extant in these street names and name some thing else for Dolores?

Mr. Graffy has written a letter to the Council re San Andres and the significance of the name in California history. A friend share it with me. Hopefully, it will be published here. In part, Neal Graffy wrote, "...Over the past week, I have been bombarded with questions about how the street was named, who named it and most importantly, who was “San Andrés.”
"To start, San Andrés is one of four streets laid out side by side specifically and purposefully to memorialize two people and two events of the 1846 Mexican American War in California. The other streets being San Pascual, Chino and Gillespie.
Andrés Pico was born November 18, 1810 in San Diego, the third son and ninth of twelve children born to Josef Maria Pico and Maria Eustaquia Gutierrez. Far from the pure Spanish bloodline that most people think constitutes the heritage of California’s early settlers under the Spanish flag, the Pico family’s ethnicity was recorded as mestizo and mulato, a blend of Spanish, Mexican Indian and African.

Andrés’ name can be found throughout the annals of California during the years of rule by Mexico. He was recognized for his aptitude and intelligence and appointed to serve in a number of positions. He also played a part in the various schemes, plots and uprisings
that dominated California politics in the 1830s and 1840s."
:::snip::::

It's ironic that he is also a Gutierrez ancestor! And it will be interesting to hear what the BLM movement says about removing the historic street name in favor of that of a Latinx. Neither San Andres Pico nor Dolores Huerta has a connection with Santa Barbara but it would seem that the name San Andres has considerable California history.